The frame has a claimed weight of 790g while the frameset – the frame, fork, headset and seatpost – is said to be 1,340g. One of the complete bikes that Lightweight brought in to show us, built up with a Shimano Dura-Ace groupset and Lightweight’s own wheels, hit the road.cc Scales of Truth at 5.92kg (13.0lb), without pedals. That’s seriously light. 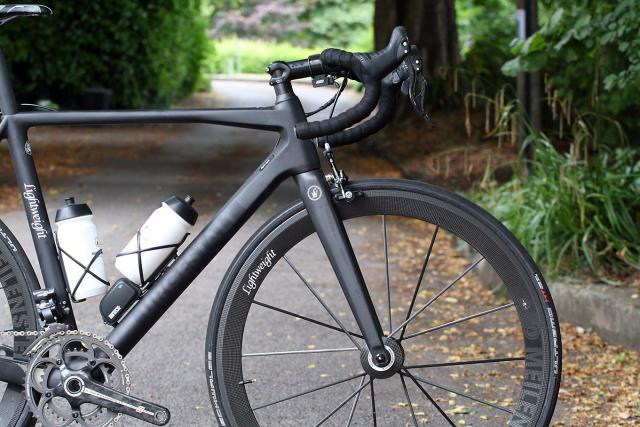 The Urgestalt – it means 'archetype' in German – is made from various different kinds of carbon fibre and features a PressFit 86.5mm bottom bracket and a tapered head tube. It’s a standard 1 1/8in at the top flaring out to 1 1/2in at the bottom for extra stiffness. 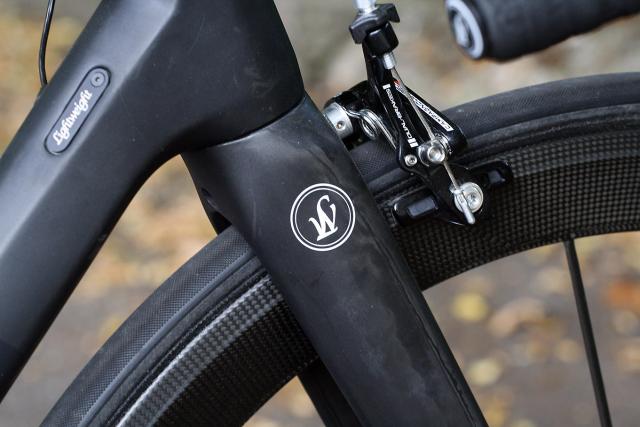 The fork is full carbon and the seatpost is a Monolink design, so it’ll take a compatible single-railed saddle from Selle Italia.

Lightweight say that the Urgestalt is aimed at 'ambitious sportive and recreational bike riders', but that can mean different things to different brands. The geometry is actually fairly aggressive. 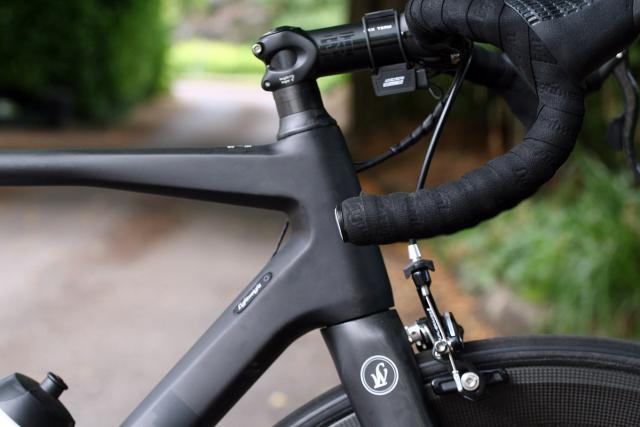 To put some figures on it, the 56cm model comes with a 560mm effective top tube and a 155mm head tube. Bear in mind that a 56cm Specialized Roubaix, for example, comes with a 190mm head tube. Lightweight clearly aren’t taking anything like the same approach, but they’re not going for a super-stretched race position either.

"The geometry is not extreme," says Lightweight’s Frank Jeniche. "It’s reactive but it’s not extreme. You could ride crit races on it. It’s not got a super long wheelbase like some endurance bikes. It’s stiff, it’s reactive, but it’s also comfortable. It feels good." 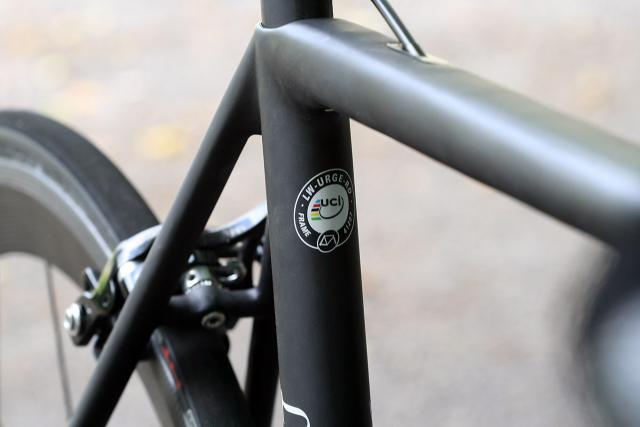 Lightweight have gone to the trouble of getting a 'UCI approved' sticker for the frame, suggesting that they do expect it to be raced at a high level. Or, at least, they want to tell potential buyers that it could be.

The frame is compatible with 25mm tyres, which make a lot of sense for most people – even the majority of pros are riding 25s these days – and with both mechanical and electronic shift systems. As you can see, this one is built up with a Campagnolo EPS electronic groupset. 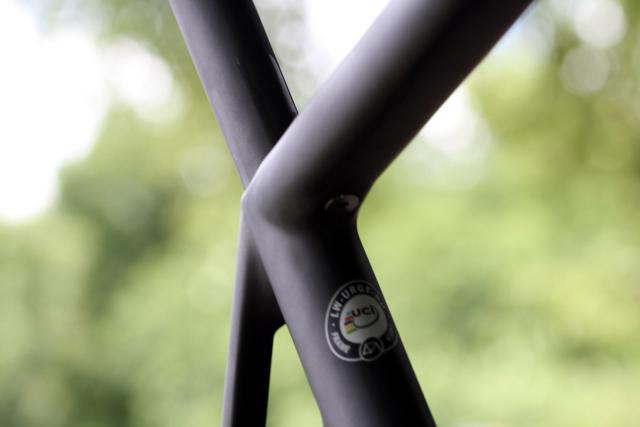 One neat little frame feature is the hidden seatpost clamp. It’s a wedge system with the bolt tucked away on the underside of the top tube where it’s all but invisible. Storck use something similar although the two designs were dreamt up independently.

As is usually the case with German brands, Lightweight really emphasise the Urgestalt’s stiffness, but they’ve not given us any figures here and we didn’t get the chance to ride the bike, so we can’t tell you how it performs. 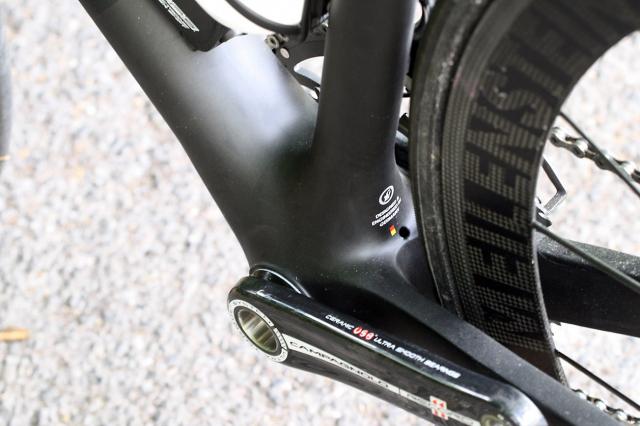 "One of the main things about the Urgestalt is the ride torque flow, putting the right kind and the right amount of carbon fibre in the right places to be sure to have the best power transmission,“ says Frank Jeniche. "It provides a perfect match of wheels to frameset, not only optically but also technically. Of course, you can use other wheels with this frame and Lightweight wheels with other frames, but if you want the best of the best go for the combination of Lightweight frame and wheels.“ 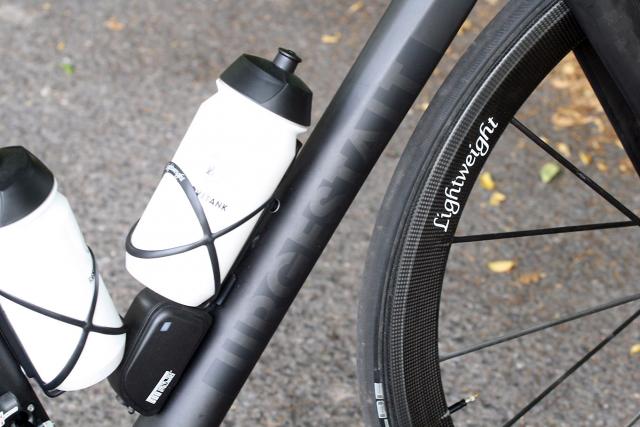 Unlike Lightweight’s wheels that are all made in Germany – and they’ll continue to be made in Germany in the future – the Urgestalt is made in the Far East to keep the price down. It’s still far from cheap (see below) but it’s a whole lot less than it would be if the production was done in Germany. Plus, there’s a whole lot of expertise in carbon-fibre frame production in Asia. Lightweight are keen to point out, though, that they’re not simply sourcing a frame mould and slapping their name on the down tube. Far from it... 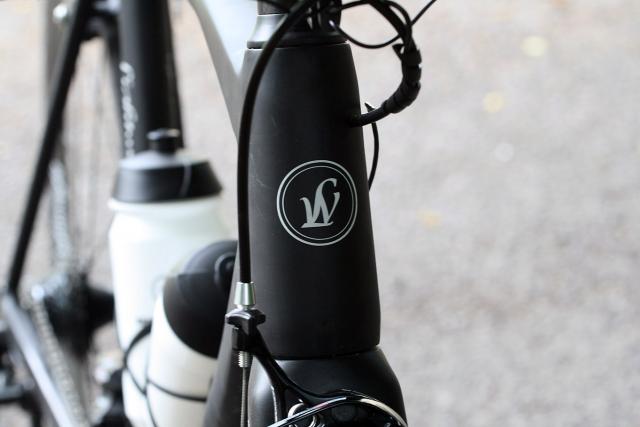 Lightweight are part of the 11-brand Wissler Group of companies, the common denominator between the various brands being that they’re all involved in high-end carbon-fibre products: aeronautic, aerospace, automotive parts... They see themselves as a carbon-fibre focused company that makes bike parts, rather than as bike-part company that uses carbon fibre. The Urgestalt has been in development for a couple of years, product manager Oliver Kiesel leading the work. "The whole group has a ton of knowledge of how to use different carbon fibres," says Frank Jeniche. "Fortunately enough, through working in aeronautics and aerospace we get access to certain kinds of carbon fibres and resin prepregs that you can’t normally buy on the market. They are so hard to build and so limited in quanitity that they’re exclusively for companies that are in that business. 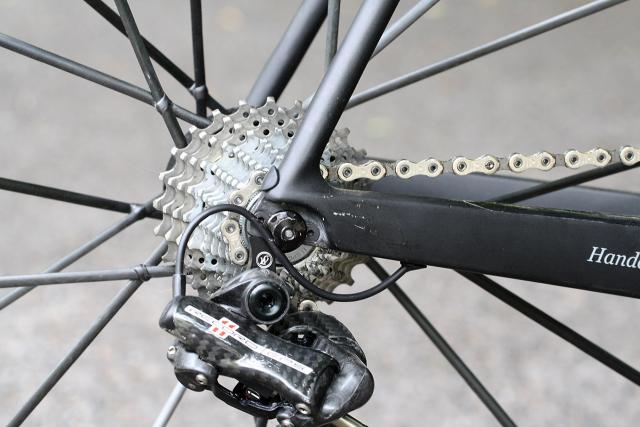 Part of the reason that Lightweight have kept their wheel production in Germany is that it allows them to keep a tighter hold of their manufacturing secrets. It also means that production is limited, which is one reason why they do very little in the way of sponsorship. There’s no point giving away wheels in order to promote the brand because they’re running at full capacity already. If you spot a Lightweight disc on the back of Bradley Wiggins’ bike, it has been paid for. As well as being tested before leaving Asia, every frame is again tested on arrival in Germany and the measurements are compared. The information is kept in a database and can be referred to when analysing accidental damage if the bike is ever involved in a crash, for instance. Lightweight can re-test the frame and see how the results relate to the initial figures. Is this the first in a range of frames from Lightweight? The company hints that this could be the case, and that an all-out race could be added in the not too distant future.

As for the price, the Urgestalt frameset will sell for £3,950 – well, it was never going to be cheap, was it? – and will be available in selected Lightweight retailers from late August. It comes in seven sizes from 48 to 60cm, each with a size-specific carbon layup.