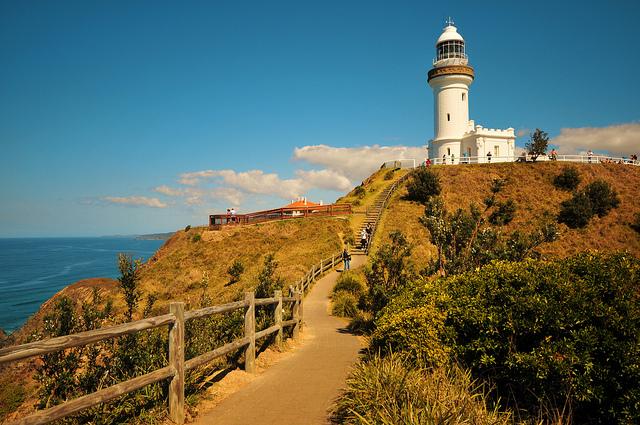 A tourist resort in New South Wales, Australia where up to four in five cyclists ride without a helmet has been held up by campaigners against Australia’s compulsory cycle helmet laws as an example of how ending compulsion could encourage more people to ride bikes. Local police insist however that they are not turning a blind eye to those choosing to break the law by riding bare-headed.

Located some 480 miles north of Sydney, Byron Bay has in recent decades become known as a town with a strong counter-culture, in part due to the arrival of surfers there in the 1960s and the holding of the Aquarius festival in the early 1970s. It is now a popular tourist destination among backpackers from Australia and beyond.

The organisation Freestyle Cyclists, whose members include Sydney-based academic Dr Chris Rissel who has repeatedly called for a repeal of compulsory helmet laws, says that “forcing people to wear helmets reinforces the perception that cycling is dangerous” and that scrapping the legislation would see more people take to two wheels.

The group also says that current laws in particular deter everyday cyclists, saying “these are the people who are most likely to give up cycling if forced to wear a helmet by law - so we discourage the safest cyclists off the roads."

In a blog post published on its website, two members of the group who had heard about the prevalence of riding without a helmet in Byron Bay tell how they decided to go and find out more, taking a five-day utility cycling break there.

Here’s what they said: “The front cover of the tourist ‘Byron guide’, available everywhere, features two images on its front cover. One is a male and the other a female bike rider without helmets riding through empty streets. This tells us two things. That the image of helmetless cycling is good for tourism as is a car-free streetscape.

“Byron Bay delivered on the first of these with helmet free cycling being completely normalised. The traffic however, was very Australian, with most holiday makers and locals choosing the car as their preferred mode of transport. I wouldn’t be prepared to guess at modal share but it was not as high as I’d hoped.”

The visitors made the following observations:

Over 80% of bike riders went without helmets
More than 50% of bike riders were women
Infrastructure was no better than the Australian average – poor
Drivers seemed to be far more courteous and careful than normal. I saw no road rage or conflict. Only once did someone yell ‘where’s your helmet’
Female cyclists rode in the traffic, without helmets and apparently without anxiety.

“It is often said that women will not cycle without good infrastructure. While my observations require further empirical research, it seems that the presence of so many unhelmeted and female cyclists had begun a cultural shift in driver behaviour that made it safe enough for many women to ride,” the blog concluded.

But Senior Sergeant Chad George from the Tweed/Byron Highway Police Unit said that Freestyle Cyclists’ highlighting what it claims are the benefits of riding without a helmet was “irresponsible.”

He told the Northern Star that police did enforce helmet laws in Byron Bay and issued on-the-spot fines to people caught riding without one.

"It's irresponsible to promote something that could harm people," he insisted. "It's not hard to wear a helmet and it is clear that it is safer to do so."

He accepted that a “non-formist” culture among residents and visitors was a factor in so many choosing to ride without a helmet, but added that “police certainly don't turn a blind eye to it."