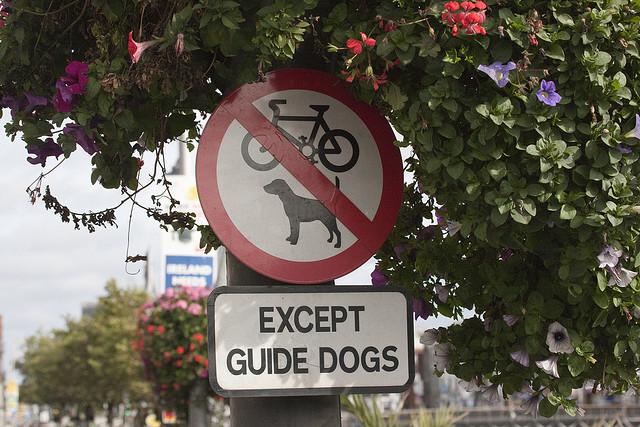 1 in 4 guide dogs in London have been struck by a cyclist, says charity

Note: as mentioned in the comments, Guide Dogs withdrew its claim that one in four London guide dogs had been hit. It has admitted supplying incorrect information, and many people have noted that its survey was deeply dodgy. We'll have more in depth analysis of this later.

A charity says that one in four blind people in London who get around the city with the aid of a guide dog say it has been involved in a collision with a cyclist – and seven in ten say they have suffered a near miss with people riding bikes on the pavement or ignoring red traffic lights.

Rob Harris from the charity said that collisions with cyclists or close misses left many blind people “fearful” of leaving their homes, which he described as “worrying,” reports BBC News.

Guide Dogs, which has its offices close to Euston Station, surveyed a fifth of the 320 residents of the city, home to more than 41,000 registered blind or partially sighted people, who use the working animals.

That produces a small sample size of around 64 people but the news has prompted a call from London Cycling Campaign (LCC) to people who use bikes in the city to ride responsibly and take care around all pedestrians.

LCC’s Charlie Lloyd said: "Any crash or a close pass which frightens or intimidates a pedestrian is unacceptable.

He added that it was "far worse when that person is blind, partially sighted or in any way less able than we are."

One guide dog owner, Deborah Persaud from Islington, said she was struck by a cyclist on the pavement as she walked home.

"My dress was torn, the contents of my handbag damaged and I was left with damage to my shoulder and hip," she said.

Guide Dogs says that cyclists should get off their bikes when using the pavement, be careful when approaching a guide dog from behind so as not to startle it, and call out or use a bell to alert pedestrians waiting to cross the road to their presence.

Except where permitted by law such as on shared-use paths, cycling on the footway is illegal, although Home Office guidance acknowledges that some people do so because of fear of traffic.

That guidance was reiterated by transport minister Robert Goodwill in January this year, who said that people could ride on the pavement provided they do so considerately, and that police officers need to exercise discretion in handing out fines.

Meanwhile, Guide Dogs Cymru is appealing for cyclists to join it for a fundraising ride next month along the Taff Trail – the Sustrans-managed shared use path used by both cyclists and people on foot.