Lotto-Belisol's bike sponsor Ridley make it really easy to spot Andre Greipel’s race bikes when they’re lined up in a rack with the rest of the team bikes: they're adorned with a ‘Gorilla’ motif around the head tube and on his custom saddle. Greipel has a handful of bikes, both the Noah Fast aero bike and the lighter Helium SL, in a variety of builds and paint finishes, at his service in the Tour de France. 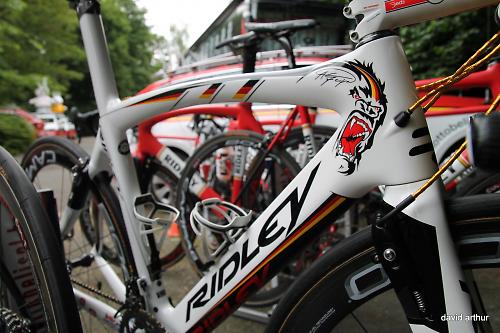 The German sprinter typically favours Ridley’s Noah Fast aero road bike. It’s his main choice when the race is likely to end in a bunch sprint, the speeds, often in excess of 60kph, involved in the final sprint are sufficient that an aero bike is highly likely to make a difference. 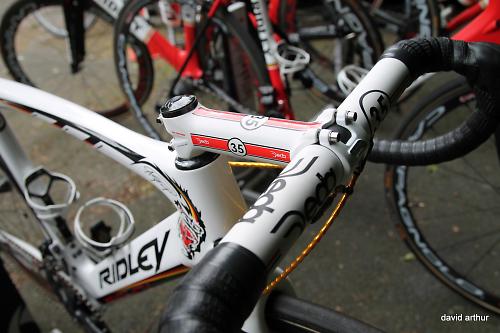 Greipel earns the 'Gorilla' nickname on account of his size. He's a big fella but the numbers, 1.84 m (6ft 1/2in) and 75kg (165lb), don't really do him justice. Such is his power that he likes a really stiff bike, which the Noah Fast is, and complements the frame with Deda 35m diameter handlebars and matching stem. 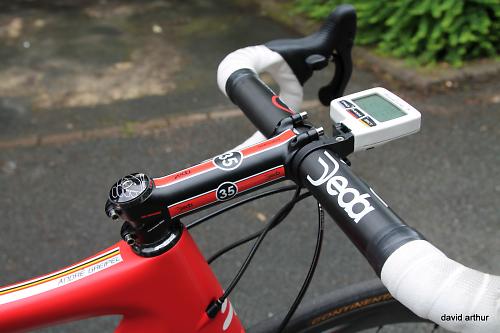 Most handlebars these day shave a centre section diameter of 31.8mm, but Deda have been pushing this wider standard for some years. It’s had a quiet reception it’s fair to say, but Greipel clearly enjoys the extra stiffness the setup offers. 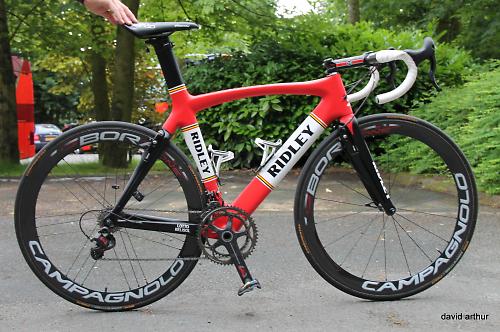 This is his team issue bike, in the same retro-inspired paint scheme the rest of the team bikes are painted in. The idea for the paint job is to match the similarly retro jerseys that Lotto-Belisol revealed at the beginning of the year. 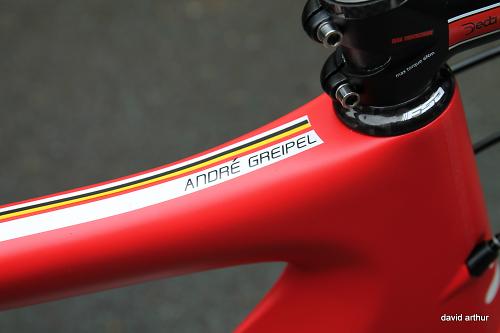 This team issue bike is far more reserved than his custom painted 'Gorilla' bikes, only his name on the top tube to help it stand out from the rest. 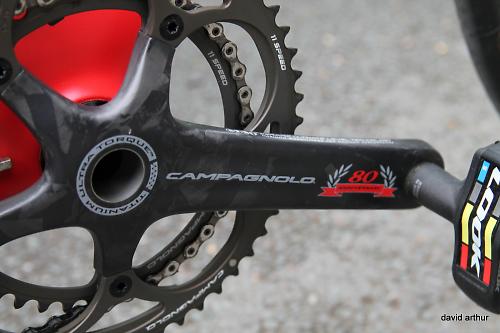 He's one of the few pros to get Campagnolo's 80th anniversary Super Record mechanical groupset. The rest of his bikes however were built up with Super Record EPS groupsets, so he's clearly happy to switch between electronic and mechanical groupsets. Some pros can be very fussy about their bikes, demanding all their bikes be set up identically. Greipel clearly takes a more relaxed approach. 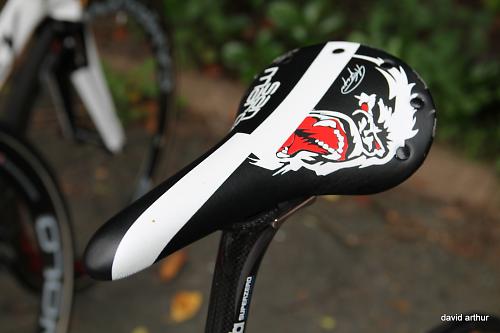 Greipel has a San Marco Regale shaped bum and the saddle company provides custom saddles for his bikes, featuring the 'Gorilla' motif and his signature. 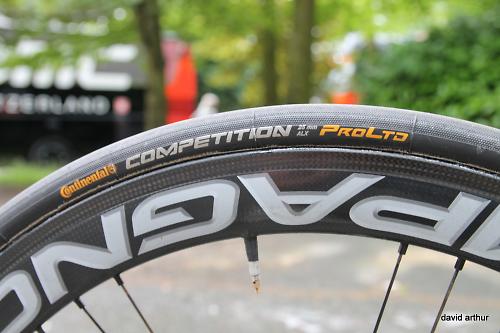 Wider tyres, by which we mean 25mm, have definitely replaced 23mm in the professional peloton, so much so that it isn't really a talking point anymore. So we're just going to move on now. 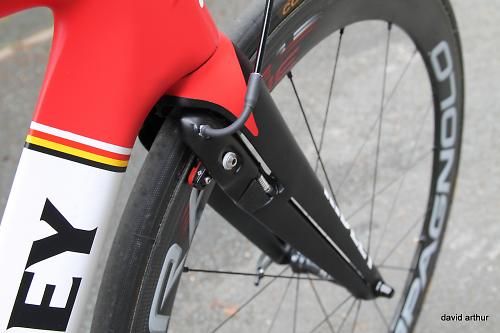 The Noah Fast is big on integration. By which we mean the mini V-Brakes are integrated seamlessly into the frame. Those slits in the fork aren't to save weight, they're an aerodynamic aid designed to reduce air interacting with the spokes and wheels by channelling it away through the slots. Ridley claim it reduces drag by up to 7%. Greipel's view when he's riding. An SRM head unit displays his speed, distance and power output. We wonder how many watts he pushes out in the bunch sprint? Lots we imagine. And yes, that is a bloody long stem, 14cm in fact. That bar tape will need replacing, look how grubby it is. Tsk. 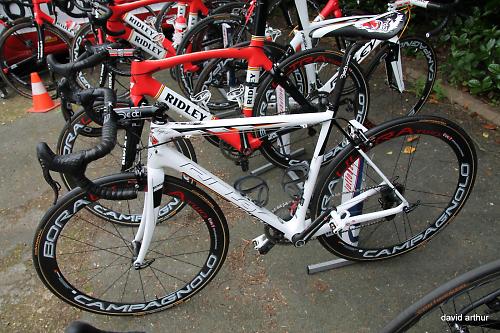 For those days when he's not likely to contest a bunch sprint, say on a mountain stage, Greipel switches from the Noah Fast to the lighter Helium SL. He needs all the help he can get over the mountains. 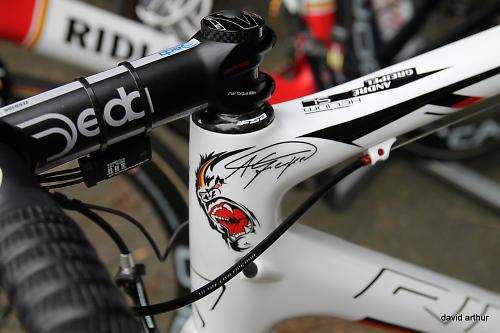 It's set up with the same build as his regular Noah Fast race bike, but he switches to regular Deda 31.8m handlebar and stem, presumably to save a smidgen of weight or maybe it's a more comfortable setup? 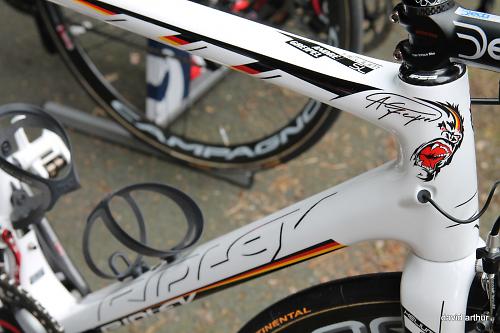 It's a cool paint job though. Notice also the German national flag colours along the top tube and down tube. That's a nice touch. This Helium, unlike his team issue Noah Fast, is built up with a Campagnolo Super Record EPS man groupset. 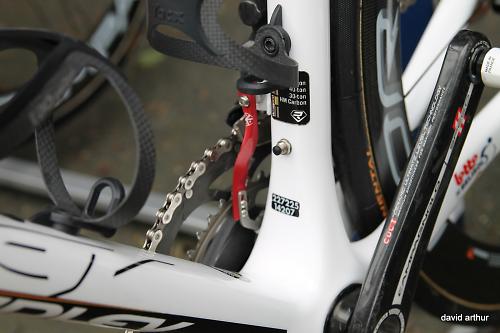 Chain catchers are still a common sight on the pros bikes. 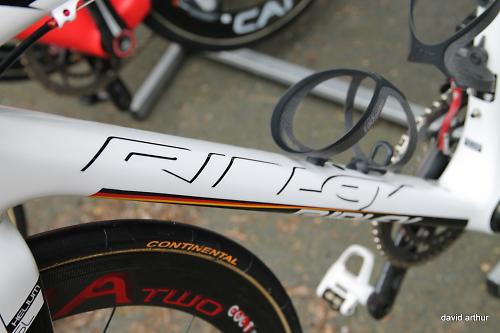 The Helium SL is the ideal mountains bikes. The claimed weight of just 750g makes it one of the lightest  in the professional peloton. That means a light build is possible. The frame incorporates many ‘standard’ features seen on such top-end equipment. So, up front is a meaty tapered head tube, down below is a huge bottom bracket shell housing a BB30 standard, rounded square down tube and box section chainstays. And pencil thin seat stays.