Our annual* look at the Tour de France team buses, the real stars of the show, bus fans might say
by Mat Brett

It’s the first rest day in the Tour de France today so without all that racing business to distract us we can concentrate on far more important matters. I know what you’re thinking: will road.cc cover the team buses again like wot they done last year? What? You weren't thinking that? Well, we're going to do it anyway.

Now last year, of course, the Orica GreenEdge bus made a bit of Tour history by getting wedged under the finish line arch in Corsica. And we all now know that back in the days when Lance Armstrong was dominating the Tour de France, the defunct US Postal team pretended that their bus had broken down in order that riders could have on-board blood transfusions away from prying eyes.

This year, though, the buses have done nothing. I mean, they’ve moved people around and that, but nothing more. That’s not going to stop us, though.

First up, the Team Sky bus, nicknamed the Death Star. This has cool written all over it. Dark windows, double axle at the rear, a roll-up canopy, a satellite dish... it’s class and inside is even better.

Textbook cone work from the mechanics with good, even spacing bar that one on the far left... They’ll be disappointed with themselves when they see this picture.

The bus has the riders’ names, along with a little flag to show the nationality of each, printed on the side.

Interestingly (well, quite interestingly), some riders have their surname on there, others have opted for a nickname. CK, by the way, is Christian Knees, Gabba is Gabriel Rasch (now a director sportif) and Froomey is Froomedog.

Swifty (Ben Swift), Froome, Wiggins and Tiernan Lock have all gone for the Union Jack while Ian Stannard has a St George’s Cross and Geraint Thomas and Luke Row have the flag of Wales. Could this lack of consistency be why Sky aren’t doing so well in this year’s Tour?

Probably not, to be honest.

You have to say that Team Sky have got themselves some competition here. The Trek Factory Racing bus looks even meaner than the Death Star. Black hub caps show you mean business. If Darth Vader was going to take a bus ride, he’d go on this one. He’d have to sit wherever Jens Voigt told him to sit, though, or he’d be off. Trek Factory Racing Fact: this is the only World Tour team with two riders whose surnames begin with Z. Probably. Good to see too that though the team name may have changed, and the teams may have merged, the Wouter Weylandt 108 graphic is still on the bus. Who’d have thought that green, pink and blue would complement one another? No one, that’s who. Lampre have been blue and pink for ages, and when they teamed up with Merida they had to add in the Taiwanese brand’s signature green, and the result is quite an eyeful - like a giant Neapolitan cruising down the autoroute. Sort of. 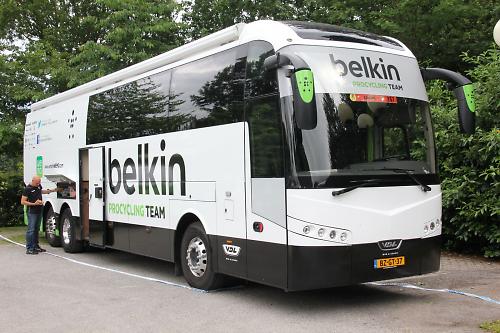 The good news is that they’ve taken that comment on board and, rather than being crushed, they’ve gone away, thought about it, and come back this year with green trim on the wing mirrors. It has made all the difference. 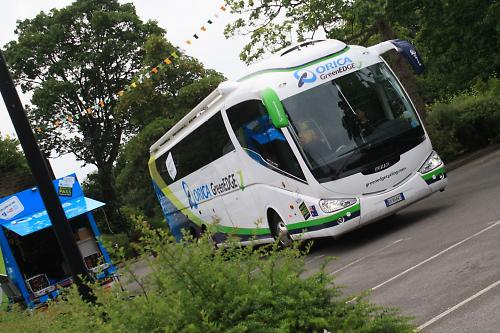 With non-matching wing mirrors and a kangaroo wearing boxing gloves sitting up front, the Orica GreenEdge bus is a bit avant garde, but it’s none the worse for that. A solid performance from the boys Down Under.

We caught up with it as the team put it through some pre-race passing under buntint safely drills - you can never be too careful.

Hey, do you know what Orica do? They provide commercial blasting systems, mining and tunnelling support systems, and chemical products. So if you need any of that stuff, give them a bell. Oh, and if you know anyone who wants 15,000 tonnes of hexachlorobenzene, give them a call about that too. You see that Expo 2017 logo on the side of the Astana bus? That was there last year too. Are they going to advertise it for four years solid? I’m definitely going. Any expo that’s worth advertising four years ahead of time has to be amazing. It’s about future energy and it’s in Kazakhstan.

We’re not sure what that yellow squiggle at the back is supposed to be but we’re right behind it. More unintelligible squiggles, please.

It's a big bus but it's only got one axle. Call us sticklers but we'd have like to see two. Nice. Good use of the canopy, a double axle, riders’ names and flags on the side, a restrained colour palette... A strong effort by the Belgians. The Swiss Pro Continental squad are punching well above their weight here. A quality piece of work, this. The highlight has to be use of blue hubcaps at the rear and white ones at the front, reflecting the paint job of the bus itself. That’s an absolute triumph. Outstanding. They're a big team we'd have expected a bigger bus, all the same they’ve got the black and red thing going to good effect here although it would be better if the blind matched the paintwork more precisely. Also, they should have taken a leaf out of the book of Swiss compatriots IAM Cycling and matched the front hub caps to the paintwork above it. All the same, good skills. Last year we said the Cofidis bus was looking dated. Did they take any notice of us? Incredibly, they did not. This looks to be exactly the same design. As you can imagine, we’re absolutely fuming.

Double axles though and some early adopters in the coachpark were saying they liked those neo-retro hubcaps.

We suggest a major makeover. Maybe mix it up a little with some Cath Kidston in there, deco hues, and corduroy upholstery. Just an idea. We’re only trying to help. Plan B would be to stick with it for another few of years and by 2017 or so, if it hasn't fallen apart, they'll have a full-on vintage look rocking there. We didn’t manage to get a pic of the Movistar team bus last year; look what we missed! This is a neat bus - sleek, black, low slung, the only one at the Tour de France with a lime green roof, and that has to be worth something.

That bloke going through the boxes: he does have something to do with the team, right? OKAY, THERE’S NO NEED TO SHOUT!

Lotto-Belisol sold a team bus over the winter (yes, of course we covered it!) so we’re guessing that this is their new one. It's certainy a busy design.

And now it has struck me that the two rear wheels look like a pair of mad, staring eyes, I can’t see anything else. We’re going to have to move on. 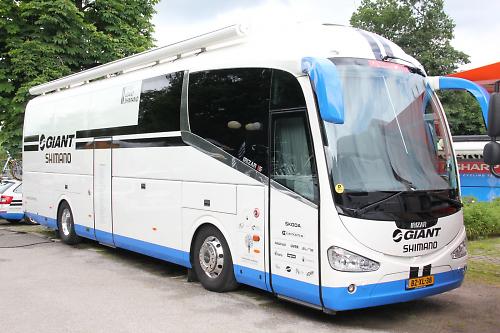 It’s understated, certainly, possibly to the point of looking unfinished. We like the blue wing mirrors and the blue line around the bottom but they need a bit more oomph to take this to the next level. We like their thinking, though. When road.cc has its own team bus – which, admittedly, could be a while off – we’re going to get it argyled up to the max to match our kit. It’ll be like this, but more so. Exterior, seat covers, headrests, fluffy dice, hub caps, windows, tyres, the lot.

We like the little Cervélo é on each of the mirrors and overall it looks solid. Also, the man who drives this really does know how to use that rear wheel steering in a tight car park situation. Yeah, it’s pretty cool but could do with a bit more going on towards the front. Possibly needs a bit more air in the front tyre. By no means the worst looking bus in the peloton, but not even the best looking black and lime green one. We don't mean to be cruel but we've got to tell it like we see it. Séché Environnement is a French company that deals in waste treatment, fact fans, and that leaf emblem is theirs. The bus looks a bit too monochrome to us. It needs colouring in. 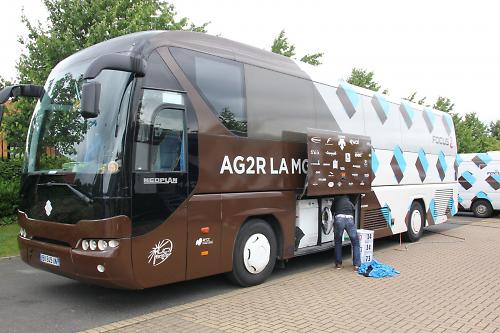 That blue, we like. The brown, not so much. Fair play though, they's stuck with it. Yeah, this is the same as last year's bus by the look of things, but that step ladder adds to it. We could be wrong but it makes us think they've cleaned the roof, and that's the kind of attention to detail we like.

Plus, although they were there, we didn't credit the logos on the mirrors last year. We feel terrible about that. Do you know the phrase, "Don't bring a knife to a gunfight"? That.

I mean, come on! This is the Tour de France. This van is red carded from our bus roundup.

Pip-pip for now. See you back here at the same time next year. Cheers, Drive!

* We did it last year and we’ve done it this year; that makes it annual, in our book.