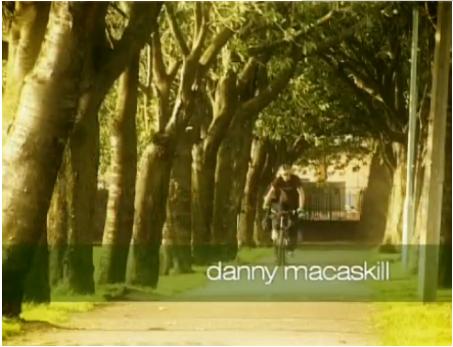 MacAskill to move from YouTube to silver screen in 2010

For those who appreciate top-notch bike-handling skills, watching Danny MacAskill performing tricks around Edinburgh was right up there with Fabian Cancellara’s stunning descent on Stage 7 of the Tour de France as one of 2009’s must-watch YouTube videos.

Now, the film, which has gained more than 13 million views on YouTube since it was uploaded in April, has landed the 24-year-old Scot a role as a stunt rider in a forthcoming thriller based on a bike messenger in New York City.

That movie, called Premium Rush, will have rather more of a budget than the 5 minute 37 second video filmed by MacAskill’s flatmate Dave Sowerby that shot the former bike mechanic to global fame, and is just the latest of a series of offers to have come the young Scot’s way this year.

In an in-depth interview published in The New York Times, MacAskill says that after his video, produced with the backing of Inspired Bicycles, had gone viral, “everything went crazy. I’d get up in the morning and be doing interviews while I was still in bed.”

MacAskill suddenly found himself in demand from all over the world. Among the more bizarre offers he turned down were a chance to appear on the Ellen DeGeneres Show – the talk show host wanted him to dress up as her and perform stunts in the streets of Los Angeles, which he told the Daily Record was “just not quite right for me” – and an invitation to join a circus in South Korea.

Calling the attention “unmanageable,” MacAskill did some commercial work, including an ad for Volkswagen and a video for rock band The Doves, and eventually employed a manager, Tarek Rasouli, a Munich-based former pro mountain bike rider.

According to Rasouli, MacAskill could be on course to earn a six-figure sum during 2010, adding “he loves riding his bike and capturing his riding on film or videos, so that’s what we try to organise for him.”

MacAskill’s desire to get out on his bike and perform tricks didn’t always meet with the positive reception he is now enjoying, however. He told The New York Times that when he was growing up on the Isle of Skye, the police would often confiscate his bike for weeks at a time.

After school, MacAskill moved to Aviemore, working at Bothy Bikes in the Highland resort while starting to make a name for himself among trials cycles, before upping sticks to Edinburgh, where he worked as a mechanic at MacDonald Cycles, whose roof he rides across in the YouTube video that catapulted him to fame.

Now, a packed schedule in 2010 beckons, with work projects taking him as far afield as Germany, Australia, Canada, the United States and South Africa.

For MacAskill, the opportunity to earn a decent living doing what he loves is a dream come true. “It’s all been such a surprise,” he told the newspaper. “I never thought people would react to the video that way. Now I’ve got so many opportunities. The only thing stopping me now is my imagination.”