Following the recent launch of their new Tarmac, Specialized have this week released the S-Works McLaren version of the bike, and Nicholas Roche will be riding it at the Tour de France. He’s the only rider on the Tinkoff-Saxo team lucky enough to be picked to ride the new bike. 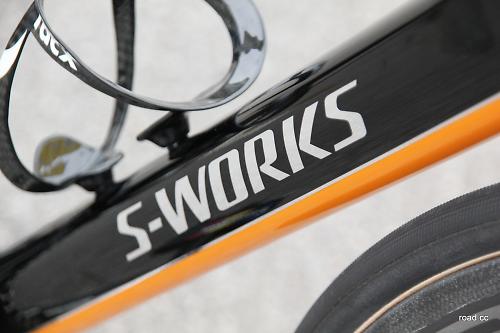 The new S-Works McLaren will cost a reported $15,000 (we'll verify the price once we've spoken to Specialized) and be limited to just 250. The bike features many changes to the standard Tarmac as a result of Specialized's partnership with McLaren, the automotive company lending Specialized their expertise in carbon fibre development and manufacture. Changes to the carbon fibre layup of the frame have resulted in a 9% - 11% weight decrease compared to the regular Tarmac, depending on frame size. This isn’t the first time Specialized have worked with McLaren, they also got together for the development of the Venge and and the aero time trial helmet. Like the regular Tarmac, the S-Works McLaren frame features their new size-specific sizing which they call “Rider-First Engineered.” This sees each size frame in the lineup being specifically designed to meet the demands of different height riders. You can read about all the details of the new Tarmac here. 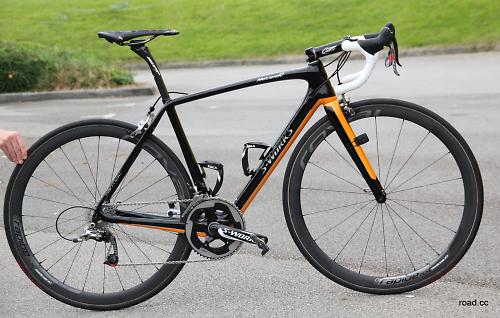 The production S-Works McLaren, finished in a McLaren Papaya Spark Orange paint finish with silver decals, will be built with a Dura-Ace Di2 groupset with a new version of their S-Works chainset that features a carbon fibre spider saving a claimed 10g. It’s colour matched to the frame. 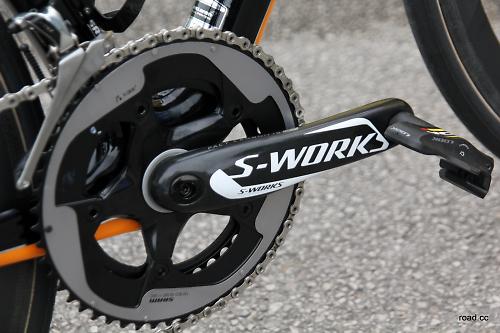 The bike Roche is riding however is built with a Sram Red 22 groupset, because the team are sponsored by Sram. He’s riding an 11-28 cassette and long cage rear mech which should help on the Yorkshire hills, with a double 53/39 chainset. Tyres are Specialized All Round 24mm tubular tyres, continuing the trend for wider tyres in the pro peloton. 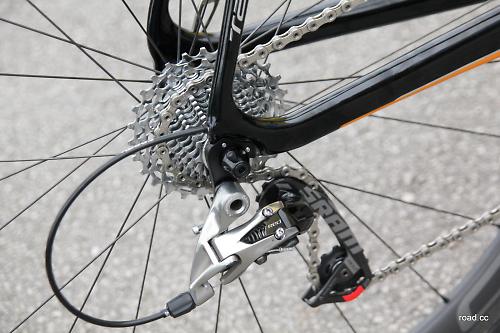 It’s not only the frame that gets special treatment, the Roval CLX40 wheels, which feature on the production bike and which Roche will ride on, have a different carbon layup claimed to save 40g per rim. They’ve also reduced the spoke count  from 18 front, 24 rear to 16 front, 21 rear. Total wheel weight is a claimed 1,150g. His bike was fitted with a handlebar mount for an SRM, but when we shot the bike there was no SRM Powermeter, just a regular S-Works chainset with Sram chainrings. Perhaps they’ve yet to swap over to the SRM Powermeter?The team mechanic did tell us that they’ve yet to add his name decals to the top tube, and Roche was presumably out riding when we visited the team hotel, so we presume they'll change that before Saturday. Back to the production bike. As we said it’ll be limited to just 250 and you have to register to purchase it on their website. You also get quite a few extras, as you'd hope for such a staggering price tag. This includes a second complete set of CLX40 carbon clinchers for training, custom sized, colour matched S-Works Road Shoes as well as a colour matched S-Works Prevail helmet and a specially designed wall mount display developed exclusively for the S-Works McLaren Tarmac to hold the bike, shoes, and helmet. You also get a BodyGeometry Fit consultation with a qualified Specialized representative and the final detail is a personalized nameplate and certificate of authenticity . We bumped into CermicSpeed Managing Director Martin Banke while photographing the bike, and he informed us that this is the first production bike to feature their coated bottom bracket and hub bearings as standard. These use their ceramic bearings contained in specially coated bearing races which they claim, as they would, are significantly faster. There are regular ceramic bearings in the headset.