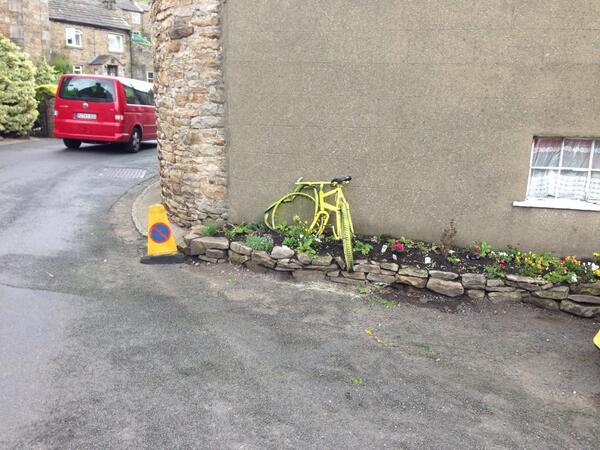 A bike that appears to have crashed into the side of a house has been described as “tasteless” and "like Jeremy Clarkson welcoming the Tour" by a cyclist checking out the roads of the Grand Depart in Yorkshire. Meanwhile, a banner elsewhere on the Tour de France route proclaiming “Welcome to Widowmakers’ Bend” has also attracted criticism.

With a little over a fortnight before the race begins Leeds, people across Yorkshire have been busy putting up all kinds of decorations to welcome it, including bicycles painted yellow in tribute to the leader’s jersey.

But Coventry cyclist Mick Jones spotted one in the Swaledale village of Gunnerside that he believes is in bad taste, and he posted a picture of it to Twitter.

#LeTourYorkshire Cycled buttertubs from aysgarth to leyburn. Lots of inspiring stuff but this was a bit tasteless pic.twitter.com/DmPjnz4Nbj

He told the Northern Echo: "We have not been to the area before and have come up ahead of the Tour to cycle and drive round the route.

"We were impressed with the wonderful scenery and the way that the villages and towns were welcoming the event.

"But I found this the depiction of a cycle at odds with the spirit of the area and more like Jeremy Clarkson welcoming the Tour."

Meanwhile landowner Christopher Bourne-Arton admitted that people had complained about his “Welcome to Widowmakers Bend” banner at West Tanfield, near Ripon.

He told the newspaper: "People keep trying to say that someone has died on the bend but nobody has died there.

"The only crash there has been was a lad who had a bit too much to drink and he wasn't hurt.

"It's not that dangerous a bend. If you were in a soap box derby it might be but not for professional riders.

"It's for the Tour de France that's all it is and it's just a bit of fun. As soon as the race is finished it will be taken down."

But one cyclist told the Northern Echo: "I just don't think it sends out the right message to tour riders who are risking life and limb for their sport, not to mention what the television audiences will think."

Tanfield Parish Council said it had received “comments” about the banner but added that it was unable to take any action in the matter.

1
Adidas launches Velosamba SPD cycling shoes for city cyclists
2
World's first eSports pro cycling team sacks rider for cheating on Zwift
3
Devon cyclists to be given helmet cameras to help catch dangerous drivers
4
"Too ridiculous": Cyclist reports motorist for driving on the pavement... and is threatened with fine for 'cycling on the footpath'
5
Cyclist fined after submitting dangerous driving video to police
6
Bath golf club set to be transformed into bike park
7
'Incredibly talented' police officer killed after being hit by motorist while cycling
8
Cycle campaign group urge people not to cycle over safety fears