Members of a women’s cycling club in North Yorkshire have swapped bibshorts for stockings and suspenders in a photo shoot for a calendar to raise money for the area’s air ambulance.

Six women from Harrogate’s Cappuccino Cycling Club took part in the project, which saw them don lingerie from Rigby & Peller, the London-based business that supplies the Queen with her underwear.

Published ahead of the Grand Départ of the Tour de France next month, the calendar features locations along the route of the race and was shot by BAFTA winning film maker Paul Berriff and leading fashion photographer Michael Dunne. 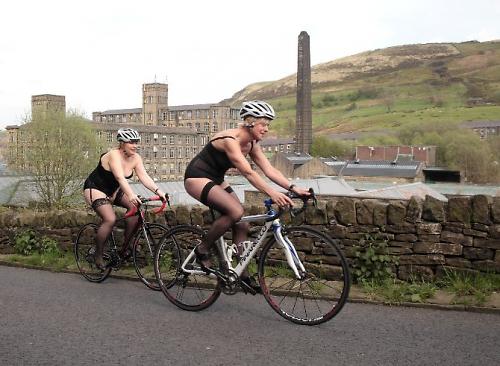 One of the cyclists who volunteered to take part, Sue, said: “We are all keen cyclists and used to a challenge but this was something new.

“Swapping Lycra for lace left us feeling exposed even before the cameras arrived! Like cycling the experience has had its ups and downs but we supported each other with humour and encouragement, like we do on our rides.

“We have welcomed the opportunity to raise money for the air ambulance, a charity we rely on to be there at any time. It has been a once in a lifetime experience and a very different way to celebrate the Tour de France coming to Yorkshire.”

Gary Verity, Chief Executive of Welcome to Yorkshire which won the bid to host this year’s Grand Départ, said: “It’s great to see people raising money for such an important charity, combining celebrating the arrival of the Grand Depart with showcasing some of the county’s fabulous locations along the route.” Berriff recalled his initial approach to the club to see if they would be interested in participating in the project.

“I telephoned Liz Annetts of the Cappuccino club and asked if they were willing to strip off and wear underwear in front of a camera, there was silence for around twenty seconds before she realised what I had just asked her,” he said.

“Within an hour she came back to me with six volunteers and before long we had fourteen ladies offering to be photographed. I couldn’t believe how quickly they responded.

“We were on location in some very cold weather but the ladies in their underwear were not at all concerned.

They have all been very brave and the calendar looks really stunning, it’s a great credit to them and such a fantastic way to raise money for a great cause and bring more interest to Yorkshire and the Tour de France race,” he added. The calendar costs £12 and can be ordered here: www.cappuccinocyclingcalendar.com

North Yorkshire is also home to the Rylstone Women’s Institute, whose members famously stripped off in 1999 for a calendar that helped raise £3 million for the charity Leukaemia & Lymphoma Research, with their exploits forming the subject of the 2003 film, Calendar Girls.