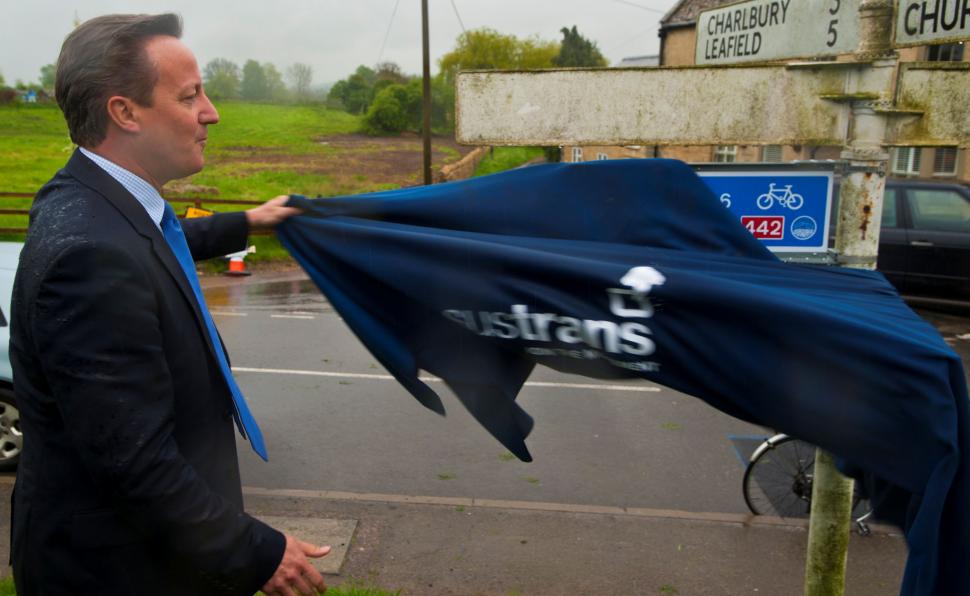 Old adage that "a week is a long time in politics" still holds true in 2014...
by Simon_MacMichael

Four days after Prime Minister David Cameron declared “this is a cycling nation” as he opened the latest section of the National Cycle Network, newly published data from the Department for Transport (DfT) reveal that the levels of cycling in England fell in the year to October 2013.

According to the DfT’s Local Area Walking and Cycling in England: 2012 to 2013 report, published today, the percentage of people cycling at least once a month for either leisure or utilitarian purposes was 14.7 per cent in the  year to mid-October 2013, down from 15.3 per cent in the preceding 12 months.

The DfT says that “although the change is small, the size of our national sample [162,882 people] means that we can be confident that this decrease exists in the whole of the English population.”

Cycling campaigners have greeted the news with dismay and are urging the government and local authorities to do more to encourage people to take to two wheels and make conditions safer for existing riders.

Chris Peck of CTC, which earlier this month helped launch the national Space For Cycling campaign ahead of May’s local elections, said: “Figures released by DfT earlier today very worryingly suggest that cycle use appears to be falling in many parts of England – which is likely to be a direct result of councils across the country failing to provide space for cycling.

“Thousands of people have already written to their councillors calling for space for cycling on main roads and reduced speeds and through traffic on residential streets.”

Claire Francis, head of policy at Sustrans, said: “It is a damning reflection on road safety in the UK that cycling levels have decreased over the last year; but the few areas where numbers have increased show when decision makers put their minds and resources into increasing cycling, real progress can be made.

“Whether women and children feel able to get on their bikes is a litmus test for how safe our roads really are for cycling; we must strive to reach a point where everyone, aged 8 to 80 and regardless of gender, feels safe enough to cycle on our roads.

“We urgently need dedicated investment in walking and cycling, to allow more people to make healthier everyday journeys by bike,” she added.

Last Friday, Mr Cameron had joined the sustainable transport charity's chief executiv, Malcolm Shepherd, in the village of Chadlington in his Witney constituency to officially open the Cotswold Line Cycle Route, running from Oxfordshire to Worcestershire via Gloucestershire.

He said: “This is a cycling nation and in the year we are hosting the Tour de France I’m delighted to be here opening this new cycle route between Hanborough and Honeybourne.

“The National Cycle Network is a national treasure. It’s great for the community, linking up towns and villages and it’s great for local business like the café here in the village which is already full of cyclists.

Mr Cameron added: “I’m going to be riding this route myself as soon as the weather brightens up.”

The data published today come from Sport England’s Active People Survey, with the DfT analysing the results since 2010/11 meaning that two-year comparisons can now be made, and local authority areas identified where there have been significant increases in the percentage of people cycling for any purpose.

Significant decreases across the two-year period were registered in areas including the South East and East of England regions as a whole, the counties of Essex, Norfolk, Northamptonshire, Surrey and West Sussex.

The data reveal that in the year to mid-October 2013, some 6.5 per cent of people cycled at least once a month for utility purposes and 10.2 per cent for leisure, overlap between the two groups explaining the 14.7 per cent total.

Cambridge has the highest percentage of its population riding a bike at least once a month for any purpose at 58 per cent, followed by Oxford (43 per cent) and high levels were also found in the London Borough of Richmond upon Thames (34 per cent), York (27 per cent), South Cambridgeshire (27 per cent) and New Forest (26 per cent).

Only the London Borough of Richmond upon Thames ranks among the top eight local authorities for both utility and recreational cycling at least once a month – with respective levels of 22 and 19 per cent.

Once again, Cambridge (53 per cent) and Oxford (37 per cent) were top for utility cycling, while for leisure purposes, Winchester is highest with 20 per cent, with Rushcliffe in Nottinghamshire third on 18 per cent, and the New Forest district of Hampshire next at 17 per cent.

That last statistic is worthy of note – for all the regular stories on road.cc about local opposition to mass participation cycling events there, among its residents New Forest does have some of the highest levels of at least monthly cycling both for recreational and all purposes in the whole of England.

Women make up around half of occasional cyclists – those who ride once a month – but the proportion declines as the frequency of riding a bike increases, while by age, riding a bike among adults is most prevalent among those aged 16-24 and 35-44.

While the government insists it is investing in cycling, many have been disappointed by actions such as the dissolution of Cycling England shortly after the Conservative and Liberal Democrat coalition was formed in 2010, as well as a tepid response to the Get Britain Cycling (APPCG) report from the All Party Parliamentary Cycling Group last year.

That report called for a minimum investment of £10 per capita in cycling, something that transport minister Robert Goodwill claimed in March was happening, citing the Cycle City Ambition scheme, with local authorities such as Greater Manchester Greater Manchester (£20 million), West Yorkshire (£18.1 million) and Birmingham (£17 million) all receiving significant investment, which will be supplemented by local match funding.

Mr Goodwill was speaking at Portcullis House, Westminster, at a meeting arranged by the APPCG before an audience comprising members of the group, representatives of cycle campaign groups such as CTC and the London Cycling Campaign, and media including road.cc.

After the minister, who is responsible for cycling at the DfT, made his £10 per capita claim, CTC’s Roger Geffen pointed out to him that what the Get Britain Cycling report called for was that level of spend across the country as a whole and for a sustained period, rather than limiting it to specific areas and only for two years, as happens under the Cycle City Ambition initiative.