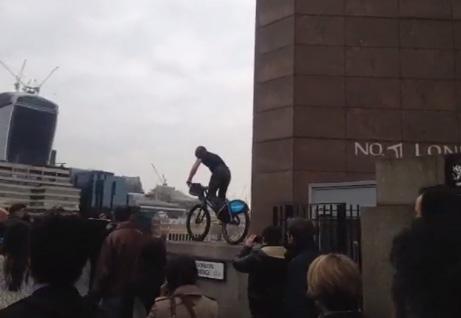 Road too dangerous? Pavement too crowded (and illegal)? Try the handrail… or maybe not
by Elliot Johnston

Boris bikes were built to cope with everthing the mean streets of London could throw at them what they weren't build for was riding across London Bridge on the handrail which is what one intrepid rider was filmed doing on Friday.

A number of Twitter users snapped photos of the rider, who was later identified as freerunner Tim Shieff.

But was that actually a Boris bike? Just lifting one of those on to the handrail would be a mighty feat in itself. In fact Shieff was riding a bike cunningly made-up to look like a Boris bike, we're not sure exactly what it is but it looks like 26in trials bike, possibly an Inspired as ridden by Danny MacAskill) disguised in London Barclays Cycle Scheme livery on the bars, frame and rear wheel.

Further footage of the duo’s escapades can be found listed under the hashtag #disruptlondon on fightme.com, here.

You can watch a clip of the rush hour stunt which made waves among confused Friday-morning commuters below.

Speaking of Boris bikes and London bridges, Beth Anderson who goes by the Instagram handle roseofwinter, and rides with Rapha Condor CC in London, posted this image of a partially-submerged London Barclays Hire Bike near Waterloo Bridge on Sunday which is a bit of a coincidence… you don't think they actually tried it with a real Boris bike first do you?

If this is indeed evidence that Shieff and Joseph tried, and failed, to perform the London Bridge stunt on a real Boris bike, that ill-fated machine would have then needed to have been carried about 2.5km upstream.

We’ll let you theorise about that one.

Website London24 caught up with the man on the London Bridge handrail, Tim Shieff, who told the site the pair were "trying to wake people up to other perspectives of London."

Shieff said: “Some people live in fear and will have a negative perspective, but many people have the eyes of a child and see new things with wonder, not fear in the eyes of an adult.

“A lot of people in London live through fear. We want to reach out to the people who see the city with wonder.”

“When you see a guy jumping walls on a Boris bike you can’t help but stop and be in the moment for a second. You dont worry about your issues or think about going to work for a second - you say: ‘Woah did that guy really just jump that on a big blue bike?’

“I like making people think through showing them talent and giving them something to appreciate.”