Koga claim their newly-unveiled, updated Kimera 2.0 aero road bike is more aerodynamic and comfortable than the previous version without sacrificing stiffness. I headed to Majorca last week for a first ride, and found the Kimera lived up to those claims with impressive speed, comfort and handling. The original Kimera was a track bike developed for Dutch track star Theo Bos for the Beijing Olympics after he narrowly missed out in Athens four years previously. Koga enlisted aerodynamic and carbon technology experts to develop the Kimera track frame, and many of the lessons learned in that project went into the first version of the road-going Kimera. 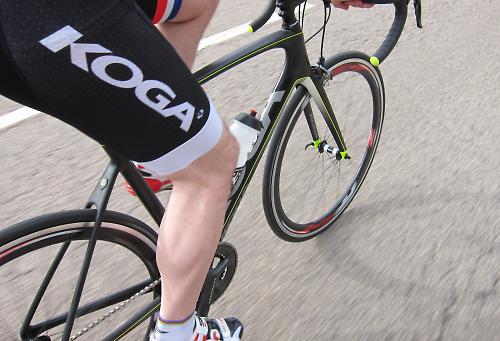 Now for 2014 the Kimera has been updated, with changes aimed at making it even more aero. The tube shapes have been slimmed down — as is the current trend amongst designers of aero bikes — to slice through the air more easily.

One other immediately noticeable change is the rear brake caliper is now located under the chainstays, a move a number of bicycle brands are making in a bid to make their machines more aerodynamically efficient; the Trek Madone is an example that springs to mind. Koga have also adopted Shimano’s new dual mount aero brake callipers.

The changes to the frame, in the tube profiles and carbon fibre layup, have also decreased the frame weight, yet without any loss of stiffness. The claimed weight (I had no scales to hand) with an Ultegra 11-speed groupset and wheels is 7.2 kg (15.87lb). That’s pretty good for an aero bike, as aero frames usually carry a bit of a weight penalty over regular road race frames. For comparison the Ultegra Di2-equipped Scott Foil we tested last year weighed 7.52kg (16.57lb). All cables are housed internally, further contributing to the aero gains, and the frame's compatible with Shimano Di2 electronic shifting. The frame has all the other contemporary details expected of a top-flight race bike, such as a PressFit bottom bracket and a tapered head tube (1 1/8in up top, 1 1/4in at the bottom). Koga have also used a 27.2mm seatpost, another detail we’re seeing a lot; the thinner, more flexible shaft is intended to provide extra deflection and take the edge off rough roads. 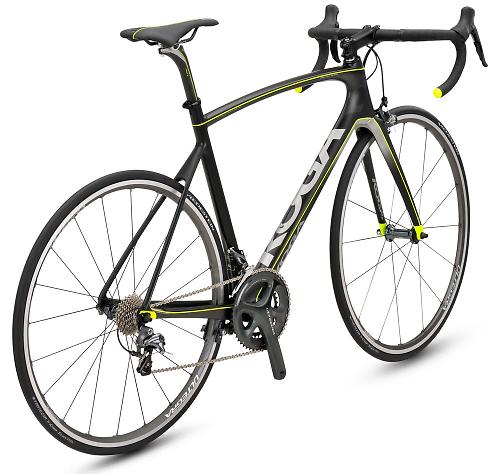 The new Koga Kimera is available at Koga dealers from this month in two versions: the Kimera Road Premium and the Kimera Road Prestige. The main differences are in the frame materials. The Premium has a high percentage of high modulus carbon so it’s a bit lighter than the Prestige.

The Koga Kimera Road Premium costs £2,599. It'll be available in two versions, each with a Shimano Ultegra-based spec, the difference is that one will have a double compact chainset and the other will have a triple. (Koga is Dutch, and when folks from the Netherlands head to the Alps, they're not all snotty about triples the way Brits are.) The Prestige with Shimano 105 costs £1,899, and £2,199 with Ultegra Compact. Even before swinging a leg over the bike, it’s clearly a good looker. The sleek tube profiles, the dropped seatstays and the lack of a rear brake caliper in the conventional location lend the frame a very understated and clean look. The smart decals and graphics help in this department. The cables are very tidily routed, the combined entry point on the head tube an intelligent approach that results in no rattles.

Koga's folks hand me a 56cm Kimera Premium, from seven available sizes. As my hands fall onto the hoods, it’s abundantly clear this is a dedicated race bike. It feels stretched. The geometry chart reveals a 57.1cm effective top tube which is long for a 56, with a 15.5cm head tube ensuring the bars are aggressively low. The head tube angle is 73 degrees as is the seat tube angle, and the wheelbase is 99.9cm. Reach is 401mm and stack is 556mm. These are all numbers that point to a fast ride. On the road, this is what I find. Immediately the Kimera feels poised and ready to pounce on any attack or move up the road. It delivers a stunning turn of speed when pressing hard on the pedals, and at higher cruising speeds it carries good momentum.

It’s on fast rolling roads that aero bikes really come into their own and the aero benefits at higher speeds are noticeable. On the flatter roads around the island the Kimera rips along the smooth Tarmac with ease.

Of course it is impossible to validate the aero gains of this new frame without any wind tunnel data or serious side-by-side comparisons with other aero road bikes. This is a first impression based on three days of riding, about 15 hours or so of riding time. We’ll aim to carry out a much more thorough test when we get our hands on one in the UK. Back to those Majorcan roads, and one place where the Kimera excels is comfort. Most of the roads, as anyone who has visited the island will know, are silky smooth, but there are plenty that are as rough as anything the UK has to offer.

The road to Cap de Formentor is a brilliant example. On this potted and scarred road the Kimera held its line with aplomb even as the 23mm tyres skipped and rattled over the broken Tarmac. It’s not silky smooth but there is very little hint of harshness or crudeness to the way it rolls over the cracks, holes and ridges in the road surface.

Back on to the smoother black top and the Kimera delivers fantastic handling. Considering I just jumped on it with only the saddle height adjusted to my height before commencing three days of riding, I felt right at home. I favour race bikes, the long and low stance matching my speedy ambitions, and in this regard the Kimera ticked the box.

There’s a fine balance to the handling, just the right match of stiffness and compliance that makes it an easy bike to ride fast. It handles with precision, taking the many hairpin and switchback turns on the mountain descents with the sort of confidence you expect of a of really good road bike. And it encourages you to push a little bit faster all of the time, so settled it feels at speed. 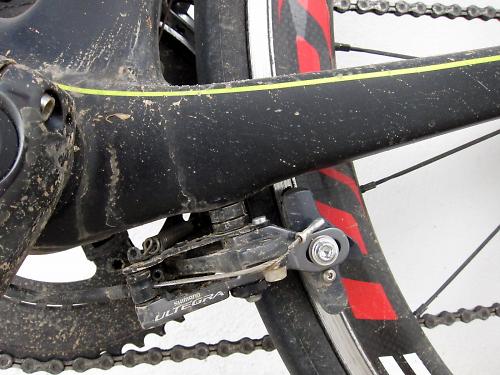 The only blemish on this first ride is the performance of the new Shimano direct mount brake calipers used at both ends. Shimano’s latest Ultegra dual pivot brake calipers are stunning, loads of power and great, precise modulation. The new dual mount brakes do away with the central mounting bolt and instead the brake arms bolt directly to the frame at either side. Unfortunately, they don't offer the same feel, bite or modulation as their conventionally-mounted cousins. This was my very first ride on them, and I need to do some more, in-depth testing, but based on this first ride, I wasn’t impressed; I’d rather have the regular Ultegra brake calipers in a shot.

That aside, Koga’s new Kimera is a brilliant bike. It manages to possess decent speed, acceleration, handling, stiffness and all with the comfort that makes it pleasure to be on for 6.5 hours over Majorca’s mountains and hills and varied road surfaces. It’s a lot of fun to ride, and I can’t wait to try it out proper on more familiar roads and a race or two. I was riding a Kimera equipped not with the stock Shimano wheels, but FFWD’s brand new F4R-C 45mm carbon/alloy clincher wheels.