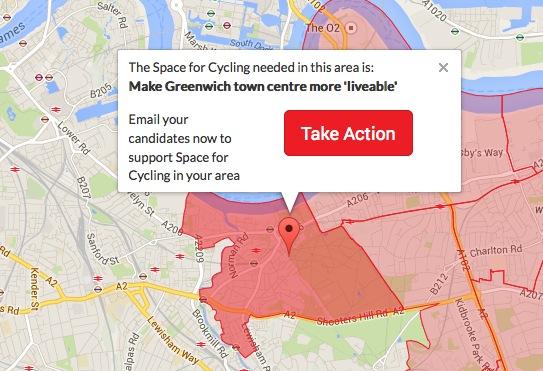 In what it says is the first initiative of its type ever launched by any campaign group, London Cycling Campaign (LCC) is to lobby 6,000 candidates in next month’s London local elections to make the city’s streets safer for cyclists – with improvements being sought mapped on a ward-by-ward basis.

The initiative falls under the Space For Cycling campaign, launched last November by LCC following a two-week period in which six London cyclists were killed.

With local elections also due to take place across England next month, including in all 36 metropolitan boroughs, LCC will shortly be joining CTC as well as cycle campaigners in cities including Birmingham, Bristol, Leeds, Manchester, Newcastle and Sheffield to lobby local authroities and call for Space or Cycling.

In London, volunteers in each of the city’s 32 boroughs (the City of London has a separate electoral system) as well as a survey of 4,500 local residents, helped the organisation identify the needs of specific wards.

As part of the campaign, LCC has launched an online mapping tool that allows London residents to put in their postcode to find their ward and see what is being sought from candidates there, and email them to ask for their support in implementing it.

Anyone – Londoner or otherwise – can browse the map to see what is being asked for across the city and, as the elections approach, see responses from candidates. According to LCC, “each local demand for cycling improvements falls into one of six categories, which are the key themes of the nationwide Space for Cycling campaign.” Those are:

1.        Protected space on mains roads and at junctions

LCC’s chief executive Ashok Sinha said: “Council elections should be about local issues, and our Space for Cycling campaign will focus local politicians, and would-be councillors, on making our neighbourhoods safer and more inviting for everyone to cycle and walk.

“Many local people don’t feel safe cycling or crossing the road in residential and local shopping streets. Our proposals for local cycling improvements will, when put in place, dramatically change the character of London streets for everyone’s benefit.”

“This is a non-partisan, grass-roots campaign. Our amazing volunteer teams have used their local knowledge to identify the 624 measures to be taken - one in each ward - and we call on politicians from all parties to give these measures their support.”

LCC says that its campaign is being supported by the Bicycle Association of GB, Evans Cycles, and the Dutch National Embassy.