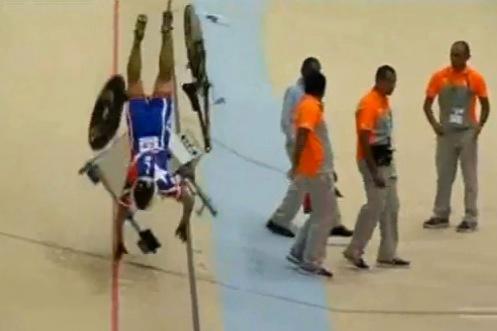 A Chilean cyclist racing for a women’s team sprint bronze medal at the South American Games in the country’s capital, Santiago, instead ended up in hospital with a fractured kneecap after crashing into a starting gate that officials had neglected to remove from the track.

It seems as though the starting gate was left in position due to a false start to the race, in which Chile, cheered on by a home crowd, were up against Brazil.

As the video shows, with an official waving a red flag, Estefania Ñúñez, riding man one, swung up the track to avoid it.

But Irene Aravena, riding in her slipstream with her view blocked, failed to see the starting gate until it was too late, the collision sending her somersaulting over it, the impact snapping her bike in two.

Aravena was operated on for a fractured patella at the city’s Clinica Santa María, reports sportslashlife.com.

The incident took place in the city’s new velodrome, which only opened in December, and the president of the Chilean national cycling federation, Roberto Pérez, has blamed a lack of experience on the part of the organisers for the crash.

With Chile forced to withdraw, the bronze medal went to Brazil.