Subscribe
Back to news
news
Sportives and organised rides
Racing 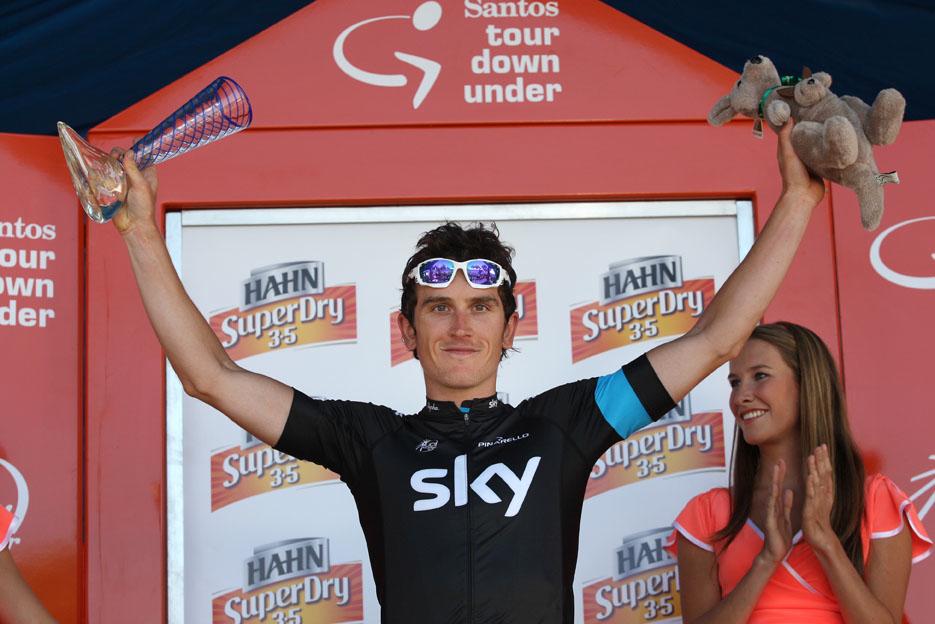 Geraint Thomas after winning Stage 2 of 2013 TDU (copyright Santos Tour Down Under, Regallo)

Geraint Thomas, who took over the race lead at Paris-Nice today, says he is at a point of his career at which he needs to decide between focusing on one-day or stage races – and the Welshman is opting for the latter.

The news comes as Thomas helps launch a new event from Dunkirk to Roubaix next month that he will ride and which will tackle some of the Paris-Roubaix pavé - and you can join him assuming you can find the £500 for the event, which includes accommodation and a celebrity dinner hosted by Thomas among other things.

It will finish at the Roubaix Velodrome where, ten years ago, Thomas came to prominence as he won the Junior version of Paris-Roubaix at the age of 17.

Speaking of his racing plans, Thomas told BBC Sport Wales: "I think next year I'll probably maybe start to go down that GC route really and look to try and improve there.

"It's kind of coming to that point now in my career where I want to sort of specialise a bit now rather than be good at a lot of things.

"I want to try and be really good at the one thing,” the 27-year-old from Cardiff continued.

"And so I think this is the last sort of year where I'll target both with the same sort of focus."

The Welshman already has a stage race victory in his palmarès, having won the the Bayern Rundfahrt in 2011, and last year he also got a podium spot at the Tour Down Under, where he finished third overall.

The versatile rider has also shown strong form in the Classics in the past. A winner of the Junior Paris-Roubaix 10 years ago, he got a top ten place at the 2011 Tour of Flanders and was second in the Dwars Door Vlaanderen the same year.

A year earlier, a second-place finish in a Tour de France stage that took some of the Paris-Roubaix cobbles saw Thomas get into the best young rider’s white jersey.

In 2012, he skipped the Tour de France as he sought – and secured – a second Olympic track gold in London in the team pursuit, having helped Team GB win that event in Beijing four years earlier.

He was back at the Tour de France last year, and was a key member of the squad that supported Chris Froome in his overall victory, despite Thomas riding the entire race with a fractured pelvis after crashing on the opening day.

His future focus on stage racing will see him continue to support the team’s overall contenders in races such as the Tour, although he said he appreciates the opportunity to lead Team Sky at Paris-Nice.

That came about after Chris Froome last week said he would not ride Tirreno-Adriatico due to a back injury, with Richie Porte switching from the French race, where he had been due to defend his title, to the Italian one.

"It's nice to get this little opportunity now,” said Thomas, who today capitalised on the chance to lead the team by following an attack from Garmin-Sharp’s Tom Jelte Slagter and finishing second to the Dutchman to take the overall lead in the Race to the Sun.

"It's kind of come out of nowhere, really. I got a call saying I was going to lead the team here, so it was a bit all last-minute.

"I guess it will show me where I am at this moment in time.

"I think I've definitely got a lot of headroom, really, to improve because I haven't done a lot of climbing efforts and stuff,” he added.

"Obviously weight, as well, comes into play a lot when you're climbing. The same as time-trialling as well – I've never really trained too much on my time trial bike."

Given his prowess not only on the track but also in time trials on the road, especially over shorter distances, that may come as a surprise to some.

In 2010 he finished fifth in the Tour de France prologue in Rotterdam, since upgraded to fourth after Lance Armstrong was stripped of all results since 1998.

He moved into the lead of the 2011 Bayern Rundfahrt after finishing fifth behind team mate Bradley Wiggins in the 26km individual time trial on the penultimate day of the race.

The final 40km of the route will be the same as that used in Paris-Roubaix, including the last nine pavé sections used in the Queen of the Classics.

Those secteurs, together with their length and their difficulty ratings, are:

Also riding will be 2004 Paris-Roubaix winner, Magnus Backstedt, who now lives in Wales, as well as a fellow former winner of the Junior event, Stephen Roche, who went on to win the Tour de France, Giro d’Italia and World Championship in a stellar 1987 season.

On the Saturday evening before the ride, they will join Thomas at a dinner he is hosting for all riders at the event.

Thomas said: “I love the Classics, and there is nothing more iconic than finishing in the Roubaix Velodrome.

“With rolling pro style support and rolling road closures, it’s a great way to share an authentic, tough classic with riders and fans of the sport.

“With this year being the 100th anniversary of WW1, it will be very poignant riding through the Fields of Flanders where thousands of men of my age lost their lives.

“It’s something we should never forget and it will be very symbolic to pass nearby the new Welsh Memorial that has been erected near Loker in memory of those who died.”