Disc brakes are sweeping through the cycle industry and the latest manufacturer to release a disc-equipped road bike is Olympia. This is their Leader, this first road bike designed specifically with disc brakes a key feature. We first brought you news of it last year but at the London Bike Show we had our first close look at the bike in the flesh.

The Leader not only represents the company’s first foray into disc brakes on road bikes, but also that of aerodynamics. Disc brakes and aerodynamics are the two biggest trends in road cycling at the moment, but they’re largely independent of each other, the Leader is one of a tiny handful of new bikes that pushes both aerodynamics and disc brakes. The frame is clearly shape and profiled to cleanly slice through the air and reduce drag, which should help offset disc sceptics concerns of the increased drag caused by disc brakes. The main tubes use an airfoil profile with an aero seatpost held in place with a concealed clamp, while the seat tube wraps around the rear wheel. The seatstays meet the seat tube much lower than a regular frame, a trend we’re seeing with a lot of aero bikes. It’s all about reducing drag, and placing the stays low like this appears to be a popular way of contributing to the overall aerodynamic efficiency.

Olympia have designed the profile of the tubes and even the carbon fibre layup to accommodate the disc brakes and the location of the forces they place on a frame, using a mixture of T800s, T700 and M30 carbon. The rear brake caliper has been placed inside the rear triangle, a move we’re seeing most manufacturers adopt. The chainstays are oversized and asymmetric to help handle the forces created by heavy braking.

The fork has a lower crown height, because there’s no need for the caliper mount drilled through the crown, which has enabled Olympia to place the headset bearing lower and, so they claim, increase stiffness. The fork, like the chainstays, is asymmetric to deal with the disc brake forces. The head tube is tapered with 1 1/8in - 1 1/2in bearings.

Like most modern frames, the Leader is fully compatible with mechanical and electronic groupsets, with all cables internally routed. Showing that Olympia really have designed this bike for disc brakes, the hydraulic hoses are routed internally too. Clean lines abound. While some manufacturers are dabbling with bolt-thru axles, a technology borrowed from the mountain bike industry, Olympia say the layup and design of the fork and rear triangle negates the need for bolt-thru axles. Upgrade wheels are available from the factory, including Miche SWR full Carbon Tubular Disc wheels for an extra £9,29.00 or FSA Vision Metron 40 Carbon Clincher Disc wheels at an extra £1,191.00

The bike here has been built up by distributor Poshbikes, and features SRAM’s Red 22 hydraulic disc groupset with WR Compositi 43 mm carbon tubular rims laced to Tune Prince/Princess hubs using Sapim CX-Super spokes. These wheels, which weigh a claimed 1,084g for the pair and cost £2,000, shave 1lb off the complete build compared to the regularly specced Vision Team 30 Disc wheels. 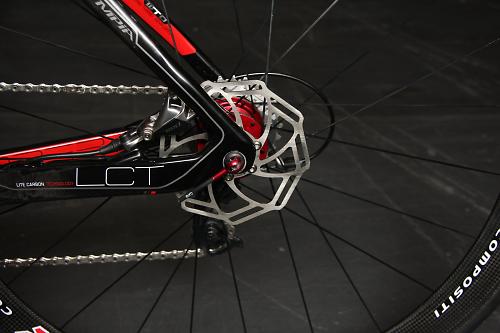