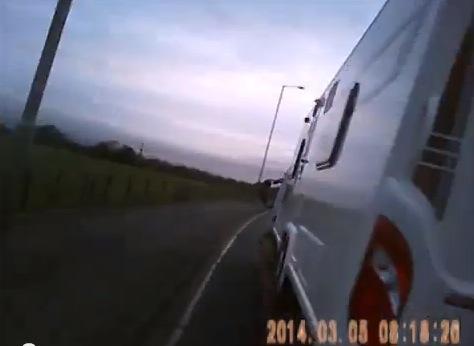 A manager at a Gloucestershire company has said he is “horrified” at a video showing one of its vehicles speeding past a cyclist on the A59 at Samlesbury, Lancashire with barely inches to spare. The company, Forest of Dean Caravans, had been alerted to the video by a Twitter user who had seen it. The cyclist involved has told road.cc he believes the close pass was not only dangerous, but also deliberate.

The video, filmed at around 7.10am on Wednesday and posted to YouTube by user jthefishy, shows just how close the flatbed lorry, carrying one caravan and towing another, came to striking the cyclist. The potential consequences of that are obvious.

It’s clear the driver of the lorry saw the cyclist – the horn was sounded loudly and at length as the vehicle came up behind the rider, alarming enough in itself.

If you watch the video at work, you may wish to turn the sound down – there’s some (understandably) strong language.

He added: “Unfortunately I cannot work out his registration or company name. If anyone can help please do.”

The vehicle was quickly identified as belonging to Forest of Dean Caravans, based in Parkend, Gloucestershire.

The cyclist added: “There is an unsuitable cycle track at the side of the road which is a shared one with no rights of way and loads of lamp posts and signs in the middle of it! That is probably why he had a problem.”

This afternoon, road.cc spoke to the cyclist, named Jon, who works near the location where the close pass took place.

He told us: “When I heard the horn, I thought it was one of my mates, but when it continued I knew it wasn’t.”

Alerted by the noise to the fact something was going on, he didn’t look over his shoulder – something that could have taken him off his line – but kept riding straight on.

As the lorry went past, Jon was getting ready to put his hand out to gesticulate – luckily, though, he didn’t do that before the caravan being towed passed him.

“I’m a big bloke,” said Jon. “If it had been someone lighter, or not so good at holding their line, it could have been fatal.”

He described the driver as a “flaming idiot,” and said “I’d like to see him get points on his licence and severely reprimanded at work.”

But he said that so long as this was an isolated incident rather than repeat behaviour, he wouldn’t want to see the driver lose his job.

“I make mistakes, everyone makes mistakes, and we need tolerance on the roads,” he went on.

“But I would like to see him get prosecuted, because it was dangerous and it was deliberate,” added Jon, who believes the driver’s action was as a result of him not using the cycle path.

Jon has contacted Lancashire Constabulary to report the incident, but hasn’t heard back from them yet.

It’s the second time he’s contacted police over video footage of bad driving, and he told us on the previous occasion they did speak to the driver involved.

Mike Stead, who is on Twitter as @tweetymike, posted a message to the social network in which he described the incident as “borderline attempted murder.”

He took it upon himself to contact Forest of Dean Caravans and spoke to its transport manager, Mark Turley, who said he was “horrified” at the footage in the video.

Mr Turley added that “disciplinary action” would be taken against the driver when he returned and that the company would co-operate in any police investigation.

The family-owned firm has said that it is preparing a statement to reassure cyclists about the action it is taking.

We asked Mike why he felt compelled to act. He told us: "Social media can be great for raising awareness, but ranting/retweeting don't change much.

“Engaging with firms, helping them understand the depth of feeling and suggesting how to progress is the way to go.