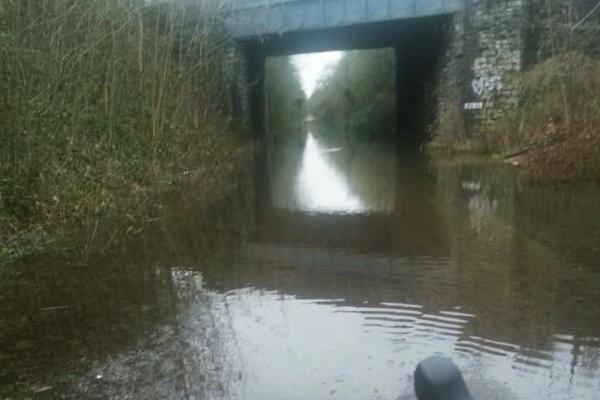 Flooding around the River Avon has led to the closure of part of a popular cycle commuting route, the Bristol and Bath Railway Path - the oldest, and one of the busiest parts of the National Cyle Network.

Over the weekend, Bath & North East Somerset Council (BANES) barred a 200 metre section of the route close to Newbridge to cyclists and pedestrians after it became submerged beneath up to 60 centimetres (2 foot) of floodwater reports the BBC.

A decision is due to be made today about whether to try and pump the water to clear the path, developed more than 30 years ago by Bristol-based sustainable transport charity, Sustrans.

BANES' cycling champion, Councillor Nigel Roberts, commented: "With the amount of water there, it wasn't safe [to keep it open]."

The council's decision to suspend part of the path, which besides cyclists is also used by pedestrians, and in both cases adults and children, came under criticism from some people on social media this weekend.

Twitter user Robert Weeks (@Chutzpah84), noting that the BBC had been filming cyclists riding through the water, he added: "If it was REALLY dangerous there would be no way to get through."

Another, @JohnSelf, replied to him and to @AnologueAndy (who took the picture above this morning) saying: "seriously? For the love of god. 'Puddle slows cyclists for 60m. Next up: man short changed in Little Chef'."

But Dave F (@DaveF63) tweeted @CycleBath to say: "Disappointing that many PoVs [points of view] on flooded B2B path are based on their own abilities (& height) and not on those of their children."

The pictures we have seen of the affected area would appear to be taken at the eastern end of the affected part of the path and where the depth of the floodwaters seems to be shallower, cycling through 60 centimetres of water would be a serious undertaking for anyone trying it. Cycling through water above hub and bottom bracket depth, while a useful way of testing how well sealed your hubs and bottom bracket are is likely to have unpleasant side effects for your bike should they fail that test.

Responding on Twitter over the weekend to questions from users of the route, Councillor Roberts said that options being considered by the council to prevent a repetition of this type of disruption in the future included raising the path above its current level at locations susceptible to flooding.

When roads and other routes are flooded, submerged hazards such as drainage grilles or potholes can become hidden, making it impossible for cyclists to see them and causing a danger.

This morning water levels on the path were said to have subsided slightly, although they were still high, and it had started to rain again.

Last month, 73-year-old cyclist Ian Taylor died in hospital after falling off his bike on a flooded section of road between Wolvercote and Wytham, close to the River Thames on the outskirts of Oxford.