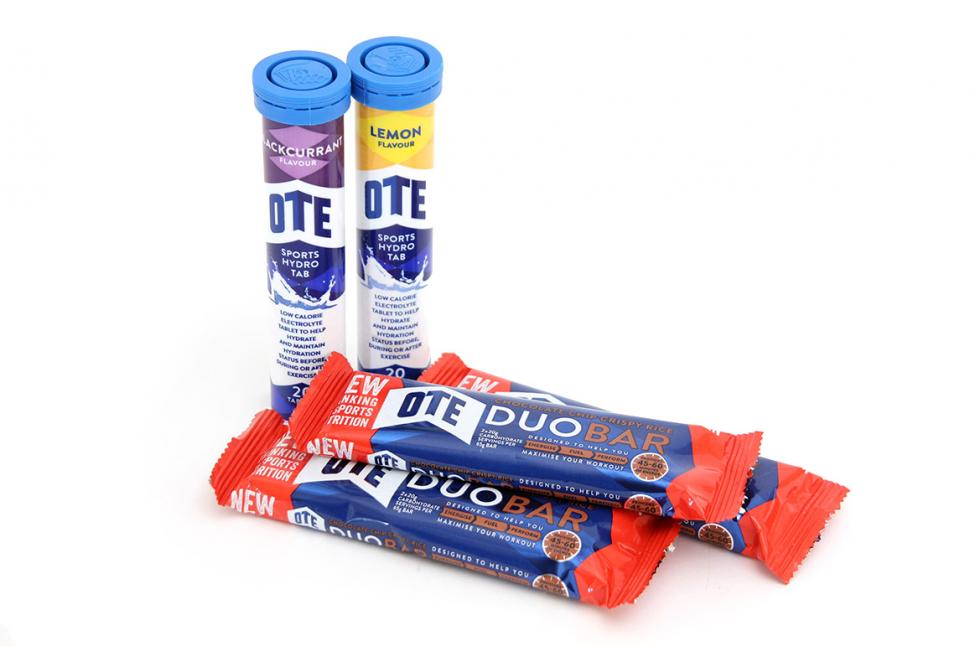 OTE have launched a new Duo Bar for use before, during and after exercise that they describe as a ‘revolution’ in the market. The British sports nutrition brand which has only existed for a few months has also announced that it's official partner to the Belkin ProCycling team for 2014.

OTE say, “The Duo Bar has been developed by professional sports nutritionists and is based on the rice cake concept that is used as race food by many top professional cycling teams. The result is a delicious and easily digestible performance sports bar.”

The bar, which contains crisp rice, whole fruit concentrates and whole milk powder, is designed to deliver both simple and complex carbohydrates to fuel your exercise. You also get 10g of protein per bar. The guys from OTE swung by to visit road.cc this morning and dropped off some samples. We’ve only taste tested them so far – rather than used them in anger out on the road – and we must say that they go down really well largely thanks to the milk chocolate they contain. The fact that the chocolate comes in chips rather than as a solid mass means the bar shouldn’t stick inside its wrapper if it melts while in your pocket.

The Duo Bar is pre-cut into two equal pieces inside the wrapper – so it’s a bit like a Bounty in that respect. Each piece provides 20g of carbohydrate which is one OTE serving. Each piece of the Duo Bar provides the same amount of carbs as one of their gels and half as much as one of their Energy Drink sachets – enough to fuel 45-60mins of exercise. This simple modular system means its easy to track the amount of fuel you need and the amount you’ve taken.

The Duo Bar has been developed from a recipe used by a nutritionist from one of the big pro cycling teams. You can eat a Duo Bar 1-2hrs before you exercise for a carbo boost if you’re pressed for time, or use it during exercise as an alternative source of carbohydrate to drinks and gels. It’ll also help you replenish your carb stores after exercise.

The bars are low in fat (4g per complete 65g bar) and the wrappers are really easy to open on the go thanks to a little nick at either end. They’re priced at £1.79 each or you can bulk buy in packs of 24 (currently at £38.66). As well as this Chocolate Chip version, a Vanilla with White Chocolate Chip flavour will be launched later in the year, probably around late March/early April. 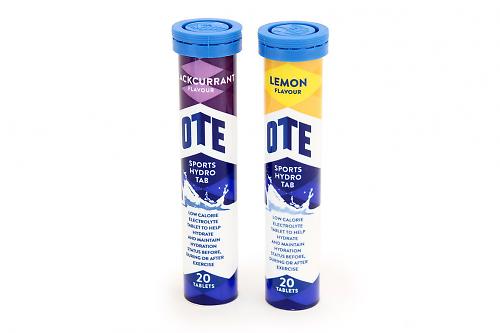 OTE have also launched Sports Hydro Tabs to help with hydration. These don’t provide energy (well, only 6.6 calories per 4g tablet), they’re electrolyte tablets containing sodium, potassium and magnesium. OTE reckon they’re useful for low-intensity exercise, when exercising in hot or humid conditions, or working out indoors. Oh, and as a hangover cure, although we know for a fact that no road.cc readers ever touch a drop of alcohol so that’s not especially relevant to you lot.

You just drop one tablet into 500ml of water (a small water bottle’s worth), let it dissolve and away you go. The OTE tabs come in both blackcurrant and lemon, and the flavouring is natural rather than artificial. The drink produced is less effervescent than some from other manufacturers, and that might be a plus point for you. Each tube of 20 tablets costs £7.

OTE’s pH neutral Energy Drink is now available in bulk packs as well as in individual sachets. Each orange, blackcurrant or vanilla pack is 1,204g, enough for 28 servings, and is priced at £23. OTE have also announced today that it's a new official partner of the Netherlands-based Belkin ProCycling team, home to Lars Boom, Bauke Mollema and Robert Gesink, so the brand will be supplying product that'll be used at the very highest levels of cycling. The team riders are said to have been very impressed by the existing range and OTE see the team tie-in it as an opportunity to help develop new product ideas over the next few months.

Robert Gesink said, “You can tell OTE use natural ingredients in their products, they taste fresh and different.”

"Working closely with one of the top ProTour teams will provide us with valuable feedback and testing, which will be fed directly into our new product development program for growing our range of products which are available to all athletes," said Peter Slater, co-founder and director of OTE Sports.

For more on OTE, or to order from their range, head over to www.otesports.co.uk.