We had our first go on Shimano’s new hydraulic road disc brakes at their press launch back in October of last year but what we really wanted to do was drag a set kicking and screaming back to Blighty so we could give them a proper go in more, erm, challenging conditions. So we needed a disc-specific road frame to hang them from. Step forward the Culprit Croz Blade. 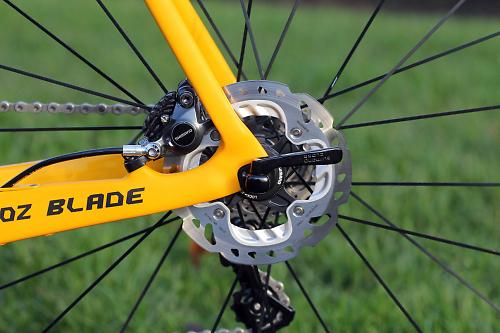 Culprit are an American/Taiwanese outfit that have fully embraced the disc revolution, offering both the Croz Blade aero road bike and the Legend frame, a seatstay-less design aimed at triathletes. There’s a few disc road bikes out there but the TT/tri bike is the first of its kind that we’ve seen, although in a discipline where aero is everything and with the current crop of discs not optimised for airflow, they might be a bit early to that party. Even so, it’s an interesting bit of design. 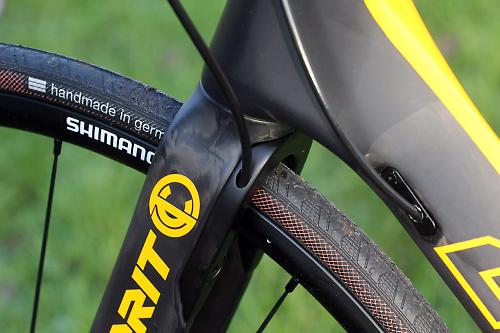 The Croz Blade is a monocoque carbon frame, built from Toray T800 fibre. It’s built with a 135mm spacing for the rear hub in order to fit a disc wheel, but it comes with inserts to allow a standard 130mm road hub to be fitted instead, as the frame can take TRP TTV mini-V brakes instead of discs if you prefer. 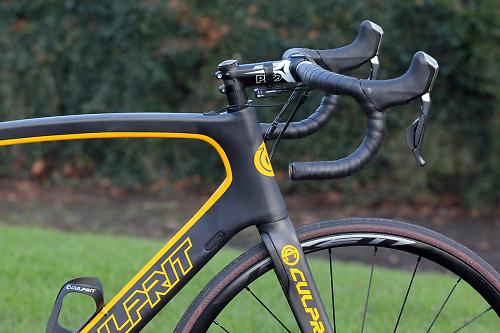 The head tube is asymetric, 1 1/8” to 1 1/2” top to bottom. It’s fairly long too at 19cm for the 58cm XL frame, but no more so than other aero bikes it might be compared with; none of the current crop are particularly low at the front for a given size. 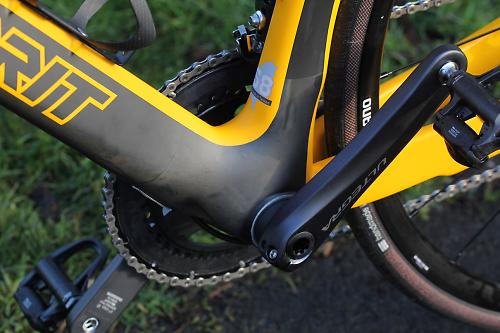 The bottom bracket is a BB30, and the chunky down tube and chainstays promise to make it an efficient platform. Culprit say that the seatstays are thinned down to improve rider comfort, but we’ve seen a lot thinner. The seatpost comes with the frame as part of the package; it’s an aero section and you can mount the saddle clamp in three different positions to fine tune your ride, or adjust your position for different disciplines. 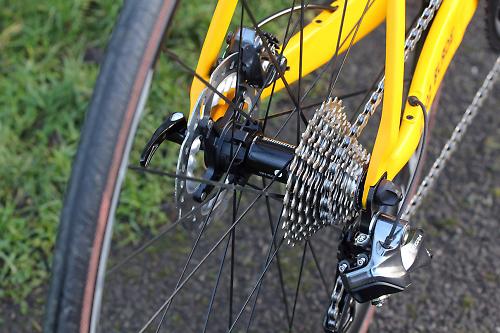 Culprit claim a weight of 1,150g for the 56cm frame (unpainted) and 470g for the fork; that’s not especially light for a race frame but there’s clearly some extra layers of carbon in there to deal with the disc brake forces, and aero frames tend to be a bit heavier anyway. Our larger frame will be a bit more again, but as it came fully built we don’t have a definitive weight for it. 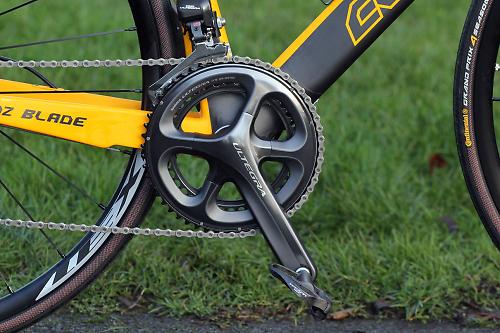 The transmission, as we said at the top, is Shimano’s new Ulterga 6870 Di2, with the R785 hydraulic disc brakes. We talked at length about them when they launched, but basically Shimano have used the space vacated in the lever by removing the mechanical shifting wherewithal to fit a hydraulic master cylinder. That means that unlike SRAM’s lever, which is noticeably bigger, the Shimano lever is exactly the same shape as the standard Di2 lever, although it looks a bit different thanks to the silver cover hiding the master cylinder and lever piston. The brakes have been derived from the mountain bike units; They look like Shimano XT callipers but the internals have been tweaked to get the right feel for the road. Heat build up is the biggest issue for road discs, and Shimano have addressed that with Ice-Tech finned brake pads, and FREEZA rotors which have an aluminium central layer with cooling fins on the inside face. The Culprit is running a 160mm front disc and a 140mm disc to the rear. 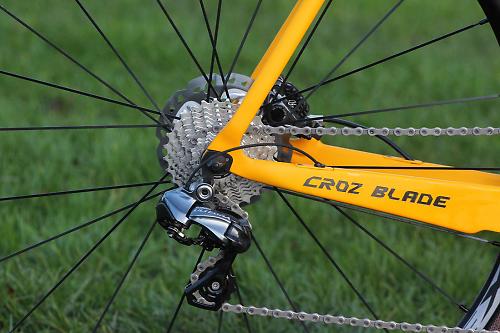 Ultegra 6870 Di2 has borrowed much of what was introduced with the new Dura Ace groupset, most notably the smaller motors which make the new mechs a lot less bulky; the rear is really no bigger than a mechanical derailleur now. The chainset uses the same four-arm spider design as Dura Ace, which saves weight while maintaining stiffness. Oh, and it’s eleven-speed, of course. The bike is fitted with Shimano’s new RX31 disc wheelset, and the rest of the finishing kit is supplied by Pro, including a Vibe alloy stem and bars and a Turnix saddle.

With pedals the Croz weighs in at 8.8kg (19.4lb) in this build, so it’s not a featherweight by any means, although it’s a similar weight to the Colnago CX Zero Disc that we also have on test right now. The wheels and the cockpit are the obvious places where there’s an easy saving to be had. We’ll be testing it as supplied, and also swapping the wheels out for something a bit lighter to see how that affects the ride.