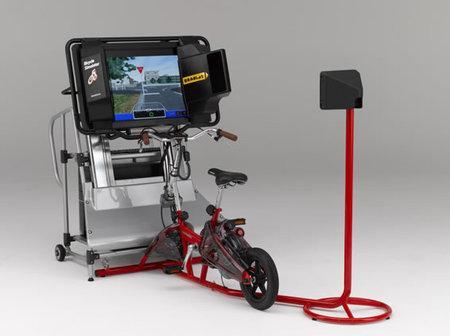 Japan, the country that brought us Karaoke, the Tamagotchi virtual pet and the Nintendo Wii, has a reputation for putting a technological spin on the kind of activity – singing, raising a pet, or keeping fit – that many of us prefer to carry out in real life, and now Honda’s boffins have turned their attention to cycling.

The company, which has a long history of innovation in everything from automotive products to robotics, is planning to launch a bicycle simulator next year, which promises to let people ride along city streets without fear of being injured through hitting potholes, getting doored, or white man van yelling “sorry mate, I didn’t see you!” as you untangle yourself from your bike’s frame.

Initially conceived as a traffic safety education aid, Honda has reportedly decided to make the simulator available commercially due to the interest it has generated, and target customers are said to include law enforcement agencies, driving schools and educational establishments.

A variety of scenarios are programmed into the machine, including “going to school”, “going to a local shopping street” and “going to the grocery store”, although sadly as yet there’s no word on it including “going up Alpe d’Huez” or “going from Milan to San Remo”.

The simulator will initially be launched in the Japanese market, with Honda taking pre-orders from next month.