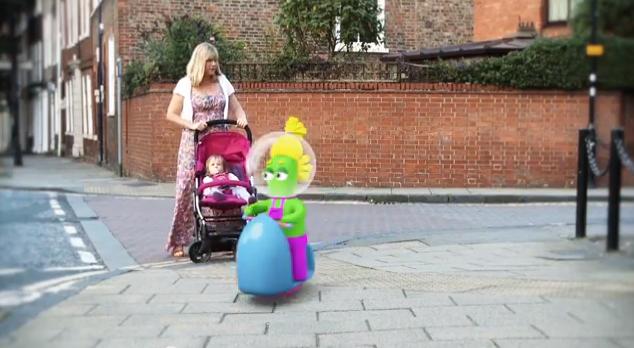 VIDEO: Don’t be an illegal alien - say no to pavement cycling says University of York

E.T.'s appearance in York is all in the name of cycle safety...
by Sarah Barth

The University of York has created a series of videos on how to cycle safely - by not following the example of a little green illegal alien.

The films, in conjunction with City of York Council, are a sort of politer version of New York City’s ‘Don’t be a Jerk’ cycling campaign.

Here’s the pavement cycling film; other instructional videos in the alien series cover bike locking, riding with lights at night and encouraging students to buy equipment at the Student’s Union shop.

Despite the university claiming the videos had been a 'big hit' with students, each had been viewed fewer than 100 times since being uploaded in September

Councillor Dave Merrett, Cabinet Member for Transport, Planning and Sustainability, said: “With the announcement of Le Grand Depart even more people are choosing to cycle, as this is a low cost form of transport, but also a  leisure activity too. It’s really important that we can help provide information so that new cyclists to York can learn how to cycle in a safe and courteous manner - so that everyone can enjoy cycling.”

Fiona Macey, the University of York’s Travel plan coordinator said, “We need to raise students’ awareness to cycle safely, their obligations to comply with the law and their responsibility to other road users. The videos achieve this in an engaging and fun way. The alien is proving very popular!”

The project is part funded by the four-year i-Travel York initiative, which benefits from £4.6 million of government funding which the council successfully bid for in 2011.

Who knows - the campaign might bring York the next cycling champion. In 2008 Chris Hoy revealed that his greatest cycling inspiration was E.T.

He told the Telegraph that he had seen the film at the impressionable age of six.

He said: "The BMX scenes were fantastic so I pestered my dad into taking me along to the local track at Danderhall where I saw all these kids having terrific fun. That was it, I was hooked and it all sort of spiralled from there."

1
Win! Hammerhead Karoo 2 cycling computer plus custom colour kit, HRM and bottle worth over £450!
2
Cyclist fined £75 for riding outside London tube station – but park your bike there and it could set you back £50,000
3
A lot of motorists really aren’t happy about impending changes to The Highway Code
4
Highway Code changes aimed at protecting cyclists to become law next month
5
Richard Dawkins claims “psycho” cyclist smashed up his Tesla – while he was in it
6
Twin brothers in court charged with murder of charity cyclist in Scotland
7
Owner of van with spiked wing mirror claims it is to deter vandals, not harm cyclists
8
Welsh rugby star Shane Williams seeks “knob head” who stole his one-off bike