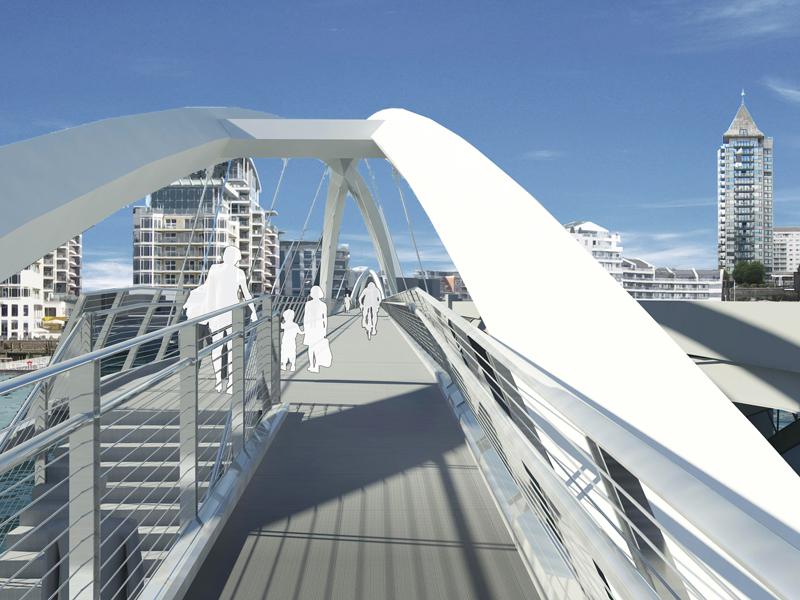 A pedestrian and cyclist bridge across the river Thames has been granted planning permission, making it London’s newest river crossing, due to be built next winter.

The Diamond Jubilee Footbridge, made from white steel and linking Chelsea Harbour and the new retail and residential developments in Battersea, will cost £22m to build, but taxpayers will not foot the bill.

Instead, the 18.4m high, 170m long bridge will be sponsored by a company which would then be able to name the bridge.

As early as 1924, two year before Her Majesty the Queen’s birth, Viscount Curzon MP acknowledged in the House of Commons that a bridge for pedestrian access situated between Wandsworth Bridge and Battersea Bridge was needed.

It is to be named after the Queen’s Diamond Jubilee celebrations, as it was the location from which the Queen boarded the royal barge to join the flotilla.

Given that cycle and pedestrian access to the South Bank is a major part of the Nine Elms and Battersea regeneration, the cycle bridge will provide an important link with the north bank of the Thames.

It is expected to carry 1.2 million people a year.

Chris Medland, the architect of the bridge, told the Evening Standard: “It will join together two riverside areas that are burgeoning with bars, restaurants and hotels, so people can come up here to visit this area rather than it just be somewhere to live.”

Nicholas Botterill, leader of Hammersmith & Fulham council, said: “A new bridge has the potential to give the south of our borough a real boost by improving the local economy, bringing jobs to the area and making transport links better and faster.”

A video of the proposed bridge outlines its location and design: