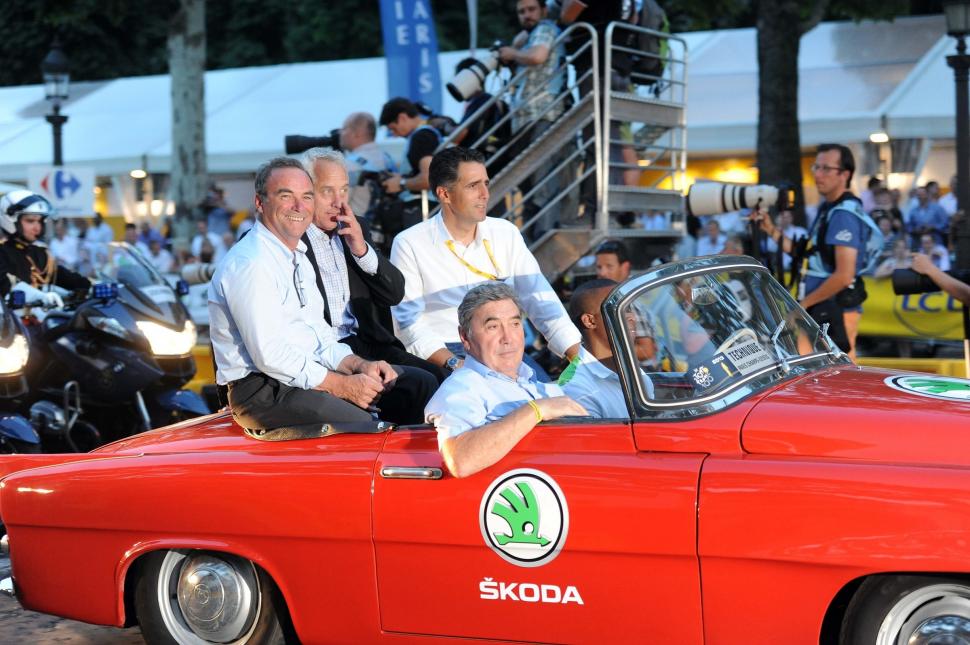 Five-time Tour de France champion Bernard Hinault, once the patron of the peloton, has been announced as the new patron of British UCI Continental outfit, Team Raleigh.

The 59-year-old’s involvement in the team has come about through fellow Breton Eric Berthou, who has now moved into a managerial role with Team Raleigh, with whom he finished third in this year’s Rutland–Melton International CiCLE Classic.

Hinault himself hasn’t been a stranger to Great Britain in the past couple of years; in his role with Tour de France organisers ASO, he has been a regular visitor to Yorkshire as the region gears up to host the Grand Départ of next year’s 101st edition of the race.

“Cycling is a sport that is exported widely and we must look at the growth it has in emerging countries such as Britain,” said Hinault – although given his fifth and final Tour victory in 1985 is the last by a Frenchman, and the past two seasons have seen back-to-back wins by British riders, some may feel “emerging” isn’t quite le mot juste in this instance.

“Now races and teams are on the four corners of the globe, which was a building process that started in my time, making cycling an international affair,” he added.

News of Hinault’s involvement with the team inevitably evokes memories of one of his great rivals, 1980 Tour winner Joop Zoetemelk, who with Dutch squad Ti Raleigh rode on bikes made by the Nottingham brand, itself now Netherlands-owned.

Zoetemelk’s victory – he and 1968 winner Jan Janssen, who took the yellow jersey in 1968 are the only Dutch riders to have won the race – broke up what would have been an unbroken run of five straight wins by Hinault, who would go on to add his fifth title in 1985.

“In 1979 when I was in the yellow jersey of the Tour de France Joop and I found ourselves alone on a breakaway and I beat him in the sprint on the Champs Elysées. The following year Zoetemelk rode for Raleigh and he took overall victory in the Tour, still very good memories.

He went on: “I knew the TI-Raleigh riders like Raas, Oosterboch, Van De Velde, Gerrie Knetemann and later Vanderearden. It was a very good team with great riders. Now this is a new team with young people and I am sure they will go on to much success and podium places.”

Berthou said: “I have travelled extensively through cycling, starting with Barloworld in South Africa then onto Spain with Caisse d’Epargne, and also Italy.

“But my roots at in Brittany, a strong heartland of French cycling, so I thought it logical to ask Breton’s most famous rider to become a patron for Raleigh.

“There was an obvious connection between the racing scene in Breton and in Britain, plus we’re next to the ocean and, like the British riders, open to inclement weather.

Hinault, nicknamed ‘The Badger’ for his tenacity, still has a fearsome reputation – woe betide any opportunist fan who tries to get onto the Tour de France podium when he is guarding it – and Berthou joked: “Most importantly, like the TI-Raleigh team I learned that it is better to have Bernard Hinault with you than against you.”

Team director Cherie Pridham added: “We’re honoured and proud to have such a personality and legend in the cycling world working with us.

“With his role at the Tour de France Bernard is a massive name in professional cycling and will certainly bring a lot of interest and exposure to the team.

“He will be offering support and guidance, both in the UK and in his native France, and will be joining us at selected events next year.”

1
Conor McGregor knocked off his bike... and gets a lift home off the driver who hit him
2
167 cyclists – and just four drivers – fined in police crackdown during Tour Down Under
3
Fancy a 3D-printed saddle custom-made for your butt? Plus more tech news from DT Swiss, Giant, 3T, Chris King, Classified, Stages & more
4
Cyclist hit by truck driver has compensation cut after judge says lack of helmet contributed to injuries
5
Councillor calls for anti-bike barriers to prevent “dangerous” cyclists “zooming across” foot tunnel
6
Town council says “restrictive” RideLondon sportive not wanted – because locals “can’t get out of their own road”
7
“Cyclists welcome – just in the right place”: Coastal path upgrades set to be shelved over concerns about environmental impact and “speedy cyclists”
8
Motorist arrested after two cyclists killed in suspected hit-and-run