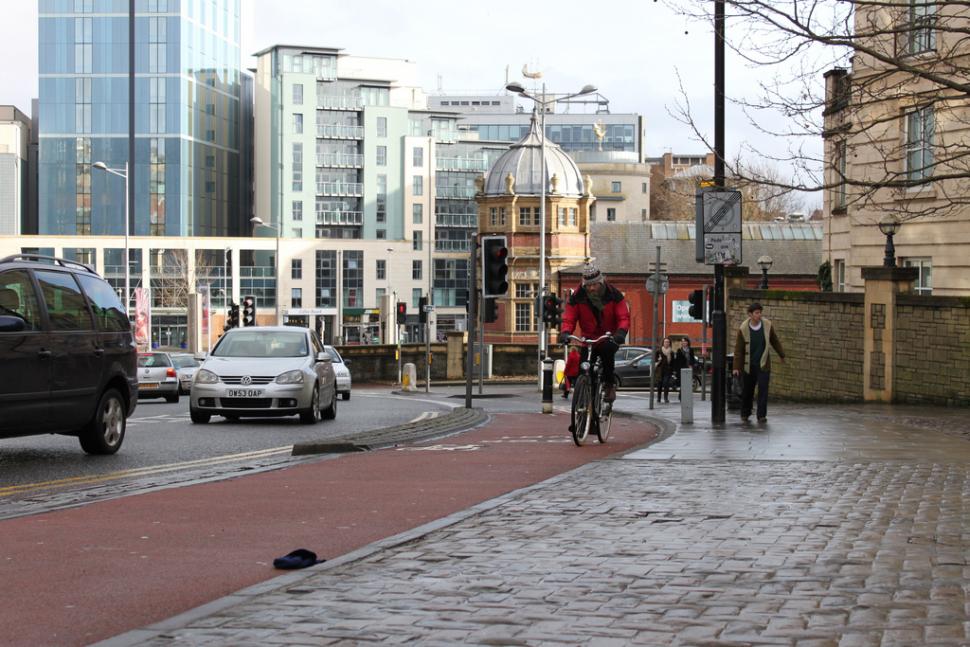 Bristol police say that the first two weeks of a road safety crackdown have demonstrated “how great the need is to educate cyclists and motorists on proper, safe use of the road” after 365 drivers and 324 cyclists were stopped for a variety of offences. But campaigners say the real solution to road safety in Bristol is infrastructure.

Police most commonly spoke to motorists for stopping in the advanced stop line ‘bike box’ at junctions, and to cyclists for riding through red lights.

Sergeant Sean Underwood who is leading the operation said: “The campaign has been going really well. The more people we speak to, the more we realise that there is a genuine lack of knowledge of the law in this area. The fact that we have stopped and spoken to so many motorists for stopping in the cycle box just goes to show that people don’t realise this is an offence.”

Police have also been targeting cyclists without lights, and have been issuing ‘conditional’ tickets.

Sergeant Underwood said: “The bike lights element of the campaign is also proving successful. So far we’ve stopped and advised 90 cyclists for not having lights on their bikes in the dark and 50 of these have been given the ‘conditional’ ticket (the option to swap a £50 fine for the chance to prove they’ve bought and fitted proper lights for their bike) of which 23 have already been into The Bridewell [police station] and had their ticket cancelled.”

But after three cycling deaths on Bristol’s roads last month, cycling campaigners say that just talking to drivers and cyclists is not enough.  They want Bristol City Council to debate Bristol Cycling Campaign’s plan for a £109 million cycling network.

Martin McDonnell, from Bristol Cycling Campaign, told the Bristol Post that a public debate would be a vital step towards long-term commitments to improve the city's transport infrastructure.

He said: "We want to smash the 3,500 barrier, in order to show the mayor and the people of Bristol that there is massive support for investment in cycling for Bristol, in order to make it a better city to live and work in.

"We feel a full council debate is necessary, as we want to get cross-party support for investment in cycling and to have it embedded not just in the council's plans but in each party's plans."

Bristol mayor and noted red-trouser-wearer George Ferguson has been supportive of the plan, but the council has yet to commit funds.

Mr McDonnell said: "Good progress has been made with regards to setting targets, putting a plan in place and committing investment over the next two years. But we need commitment to an ongoing, longer-term plan, with a team to implement it and a cycling 'commissioner' to lead the transformation."

He said: "Our Manifesto gets to the heart of the problem – the public's perception of cycling as a dangerous form of transport.

"This perception will be difficult to change without the implementation of safe cycling infrastructure – this means separate, physically segregated, cycleways on busy roads and clear separation between pedestrians and people on bicycles elsewhere.

"Good infrastructure breeds good behaviour – if there is safe, convenient, comfortable, direct cycling infrastructure people will use it. Our campaign is aimed at making cycling available to everyone in Bristol, young, old, disabled, commuters, leisure, shoppers and school children. By doing so we will help to alleviate congestion, reduce pollution, improve health and activity and make Bristol a better city."

Figures from the first two weeks of the police campaign