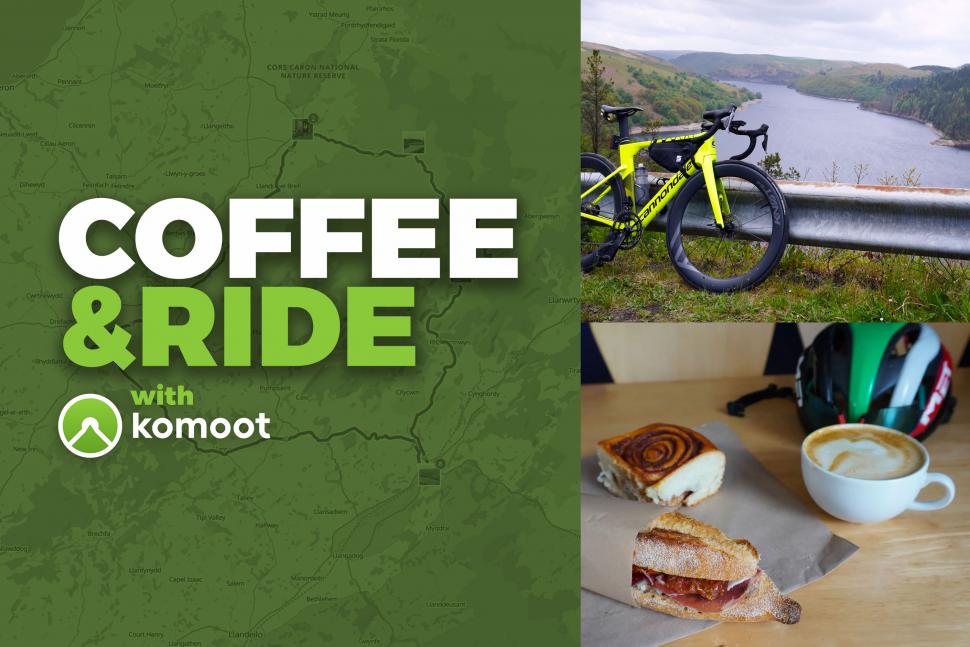 Matt Page takes us on a tough but rewarding journey around the valleys of Mid Wales, with the tasty Coffi a Bara cafe being one of the highlights on route
by mattpage

For this month's Coffee & Ride with komoot, we head into the blissful wilderness of Mid Wales. This scenic, picturesque ride takes you into the hills of the Tywi valley and a route that follows the historical drovers route. It's a challenging but incredibly rewarding ride, and one that will you will remember if you fancy downloading the route and taking it on.

At almost exactly half way around the route, and after the most challenging section, Coffi a Bara (which translates to Coffee & Bread in Welsh) is a very welcome stopping point. Owned and run by Chris and Amilee, it opened just a few months ago when the couple wanted to escape a frantic life in the city. Chris is a self-taught baker, and the cafe is a mix of bakery, patisserie and cafe with a great selection to choose from.

As you enter Tregaron it can be easy to miss the cafe, which is located within the town car park. If you reach the centre, turn around and it's 40 metres away on your right. Perfectly located and with a large courtyard area, there is ample room for storing bikes. With the sun out it also makes for a good place to sit outside. 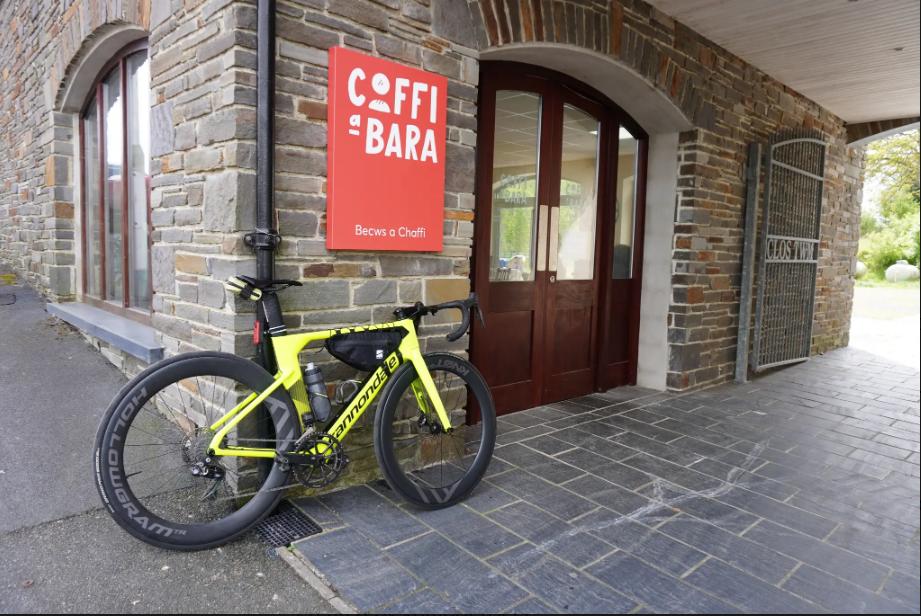 To refuel there are plenty of options, with some delicious baguettes, great coffee and some of the nicest pastries going, plus a few more slightly leftfield options, like the Chocolate Cruffin and pastry hot dog. The bread is made fresh every day, but despite riding with a small frame bag, it wasn't quite big enough to fit a loaf inside... I did manage to grab the very last pain au chocolat that remained though!

To enjoy the food at Coffi a Bara, first you need to get there; and the riding as you head up the upper Tywi valley is some of the best you'll ever experience. 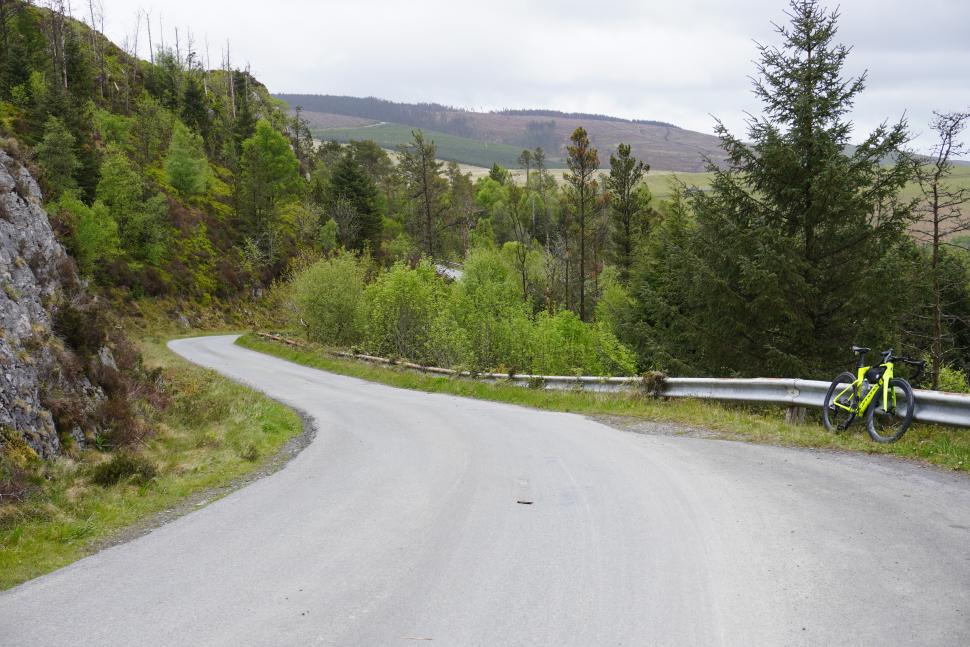 The start of the ride is the market town of Llandovery, at the north of Carmarthenshire it has reasonably good transport links for a rural town. The town has a lot of history to take in, with a castle in the main car park, and random facts including that up until recently it had more public houses than any other town or city in the UK. The glut of pubs dates back to when the town became an important stopping point for drovers taking their livestock to the bigger cities, and our route will follow one of those tracks. 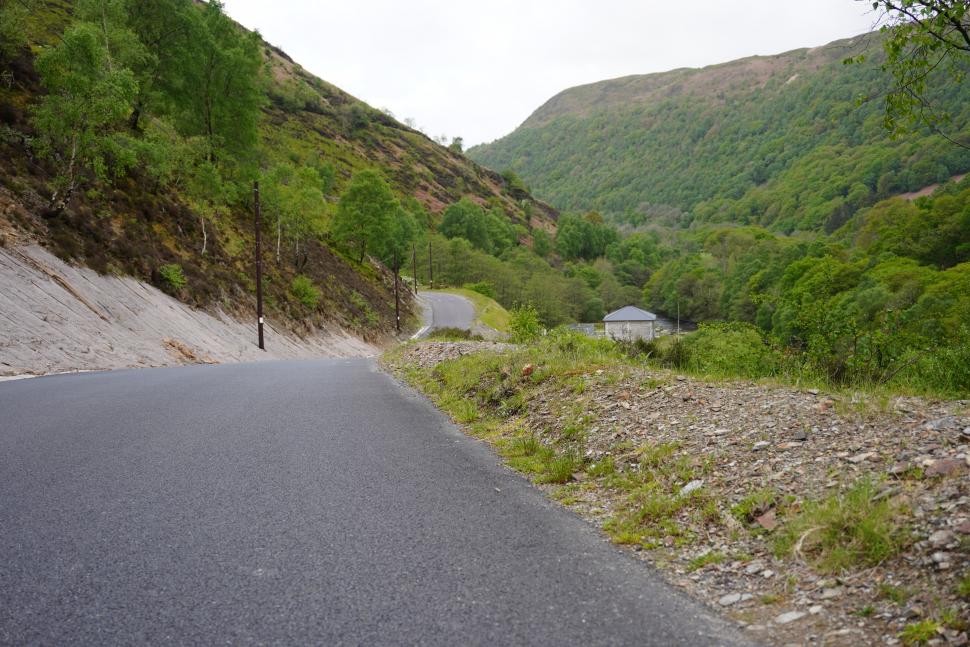 As you leave the town, the roads narrow and traffic drops and it is a theme that will continue for almost the entire ride. Gently climbing as you follow the Tywi river upstream through to the village of Rhandirmwyn, the point where the first major climb begins. In full it is 6km at 3% with a few steeper sections into double figures, but there is the opportunity to stop 2/3 of the way up and take in the view of the dam, which is the tallest in the UK with an impressive slipway running from the top. 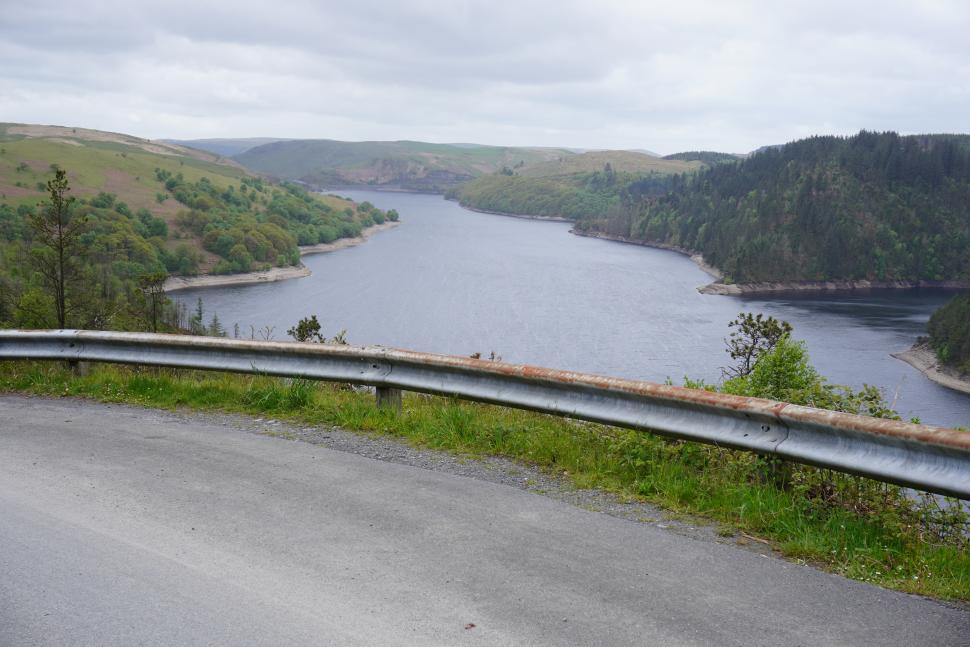 From the dam the route winds around the perimeter, rising and falling with incredible views the whole way around. The views are a way to take your mind off the climbing, which does not let up as you follow the waters edge.

The traffic, or rather the lack of traffic is something you will almost certainly get to enjoy, as the road must surely be one of the quietest in Wales. During my journey from Rhandirmwyn to the next village at the very far side, over 25 kilometres of riding, I passed just two cars. TWO! 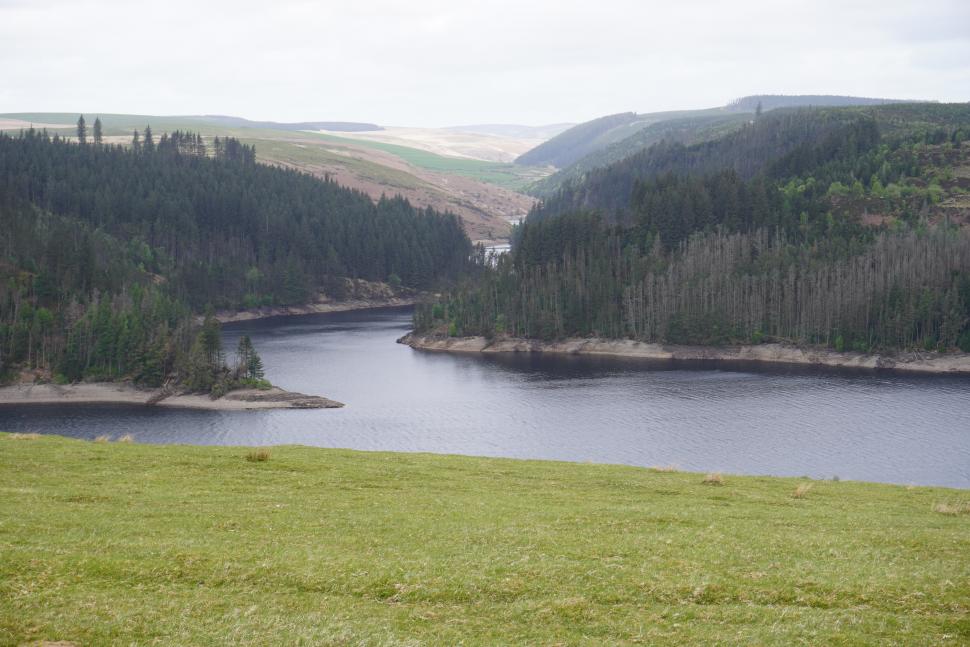 At the far end of Llyn Brianne, the road turns left and cross the Tywi near its source, and for those looking for another challenging ride, carrying straight ahead would take you to the back of Devils Staircase, a savage 25% slope that I believe is harder from this direction than the more famous twisting section. 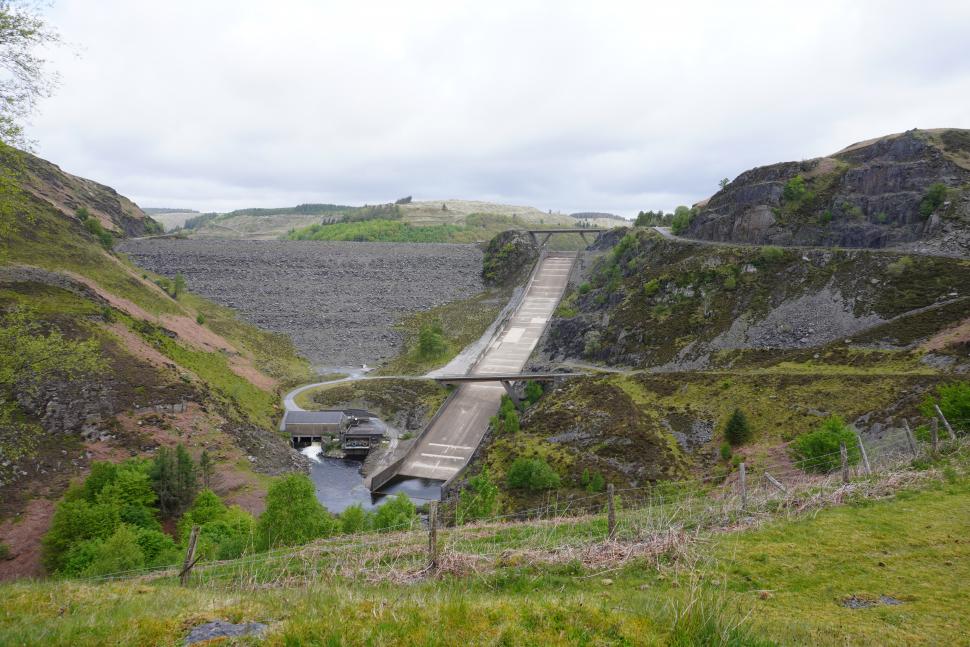 Instead of Devils Staircase the history and random facts from the route continue, passing Soar y Mynydd chapel, the most isolated and rural chapel in the whole of Wales, and perhaps the whole of the UK. Ironically due to that fact, which is becoming quite known, the monthly chapel services are probably busier than they have been for many a year. 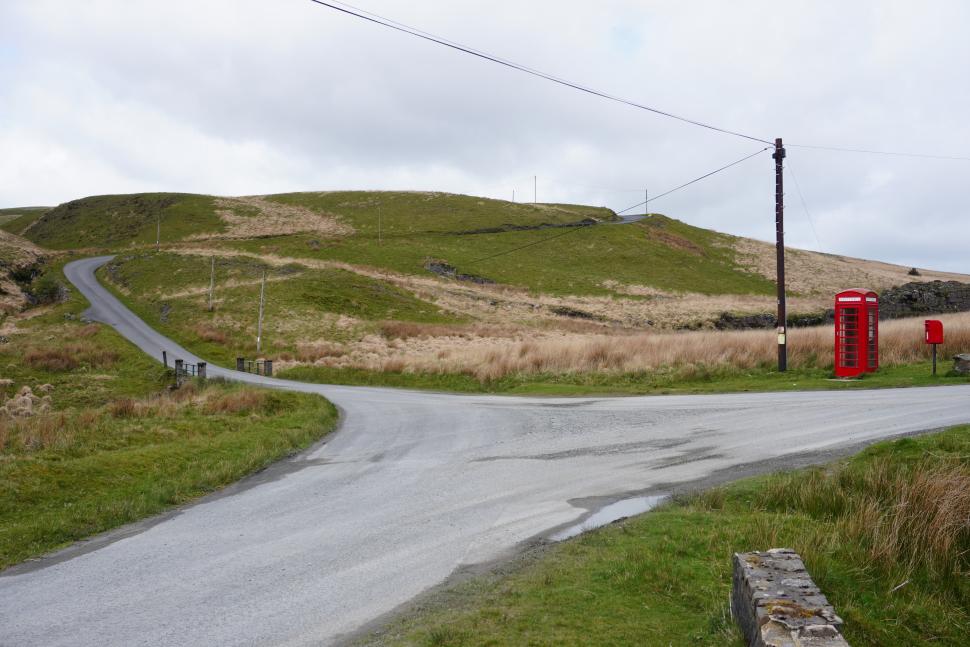 For such a rural route, shortly after Soar y Mynydd is another site that has become known for its remote location, with what was Britain's most remote phone box. No longer housing a phone, it was however recently refurbished and featured in an advert for Ant & Dec. From here there is just one more long climb before the downhill to the town of Tregaron, where Coffi a Bara will be waiting for you almost as soon as you pass the first house.

After a filling stop at Coffi a Bara the route has its first longer flat, or at least easier section. With 50km in the legs, and a stomach full of good food it will be welcome.

From Tregaron the route follows another river, which this time is the Teifi, the longest river that flow entirely within Wales. Gently undulating 17 kilometres alongside the river with only 100 metres of climbing, it's about as easy as it gets in Mid Wales. Along this section you pass through the village of Llandewi Brefi, which for those who can remember the TV show Little Britain might be shocked to know it is actually a real place! 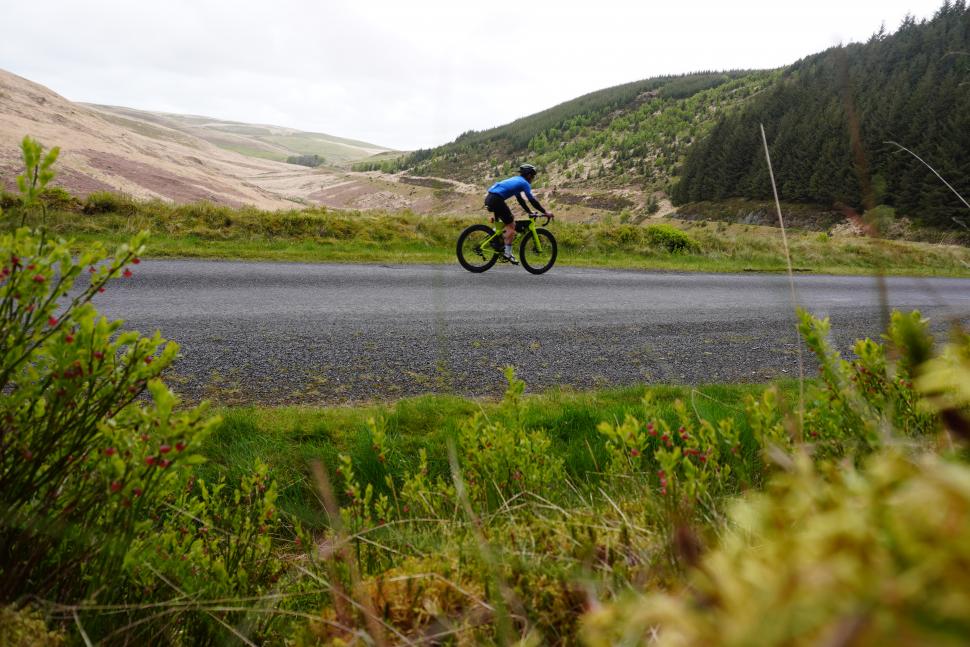 The gentle road reaches Cwmann, and from here there is a brief section on A-road, the only section of the whole route, but it is still relatively quiet to Llanybydder. The market town sits at the 70 kilometre point of the route, but it is also the final town, or village that you will pass through with a shop of any kind; so if you need to refill with water or food, don't miss the chance.

Leaving town the hills start to return, although not quite as challenging as the first half at least. The road out is a gradual climb for five kilometres before a fast drop to the village of Rhydcymerau. As an aside, this is probably a tough one to say for anyone who can't speak Welsh, but for a little help: it's Reed-come-air-eye!

Back to the ride - from here the rural roads return, following the edge of Brechfa forest, which is an area with some superb mountain bike trails and covers a vast area of Carmarthenshire. 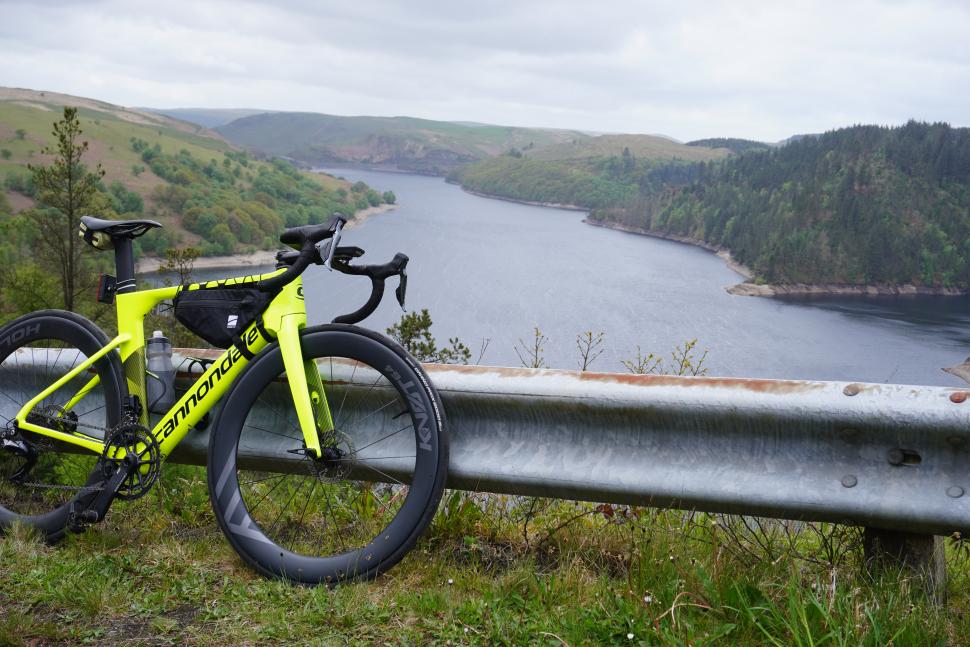 The final big climb starts after 90 kilometres, which is nowhere near as long or savage as the earlier climbs. A few kilometres later, and it's all downhill back to Llandovery with a scorcher of a road that twists and turns for almost 10 kilometres with only the briefest of uphills along the way. As a full route it's without a doubt a challenge, but the terrain, scenery and the fantastic food available at Coffi a Bara makes it an unforgettable ride.

Ready to plan your next coffee & ride? Head over to komoot to get started.