Back to Features
feature
Interviews
Culture 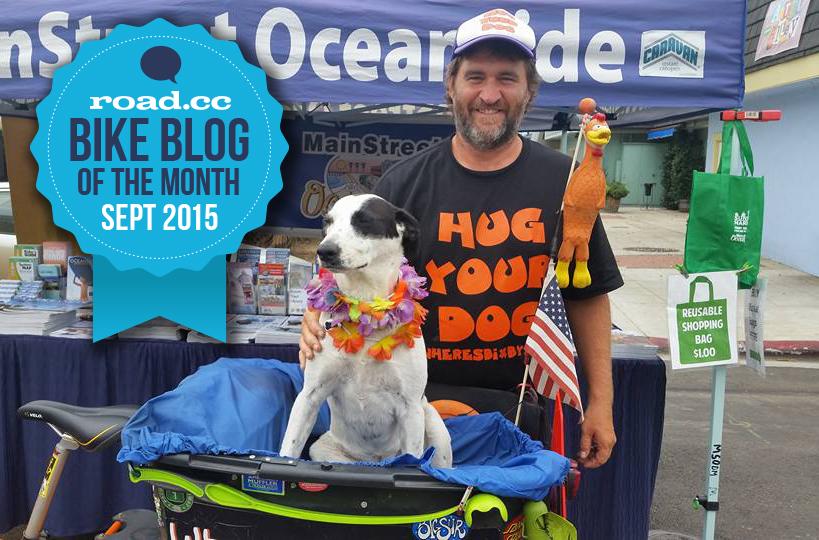 Blog Of The Month: Where's Bixby?

Rescue dog Bixby is travelling the US with her human Mike, helping to publicise the plight of dogs in shelters who need homes. Mike told us about the project that he documents at WheresBixby and on Bixby's Facebook page.

Tell us a little about what WheresBixby is and what it covers?

WheresBixby is the journey that Bixby has taken me on all across the United States to see my country, meet its people and promote pet adoption from local animal shelters. This is done, at least online, through the eyes of Bixby the rescue dog and documents our travels as well as pooches that are looking for their humans to rescue along the way. 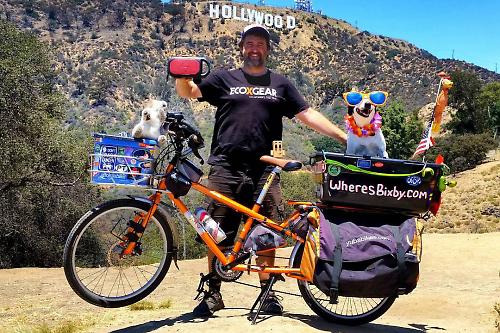 Why did you choose cycling for the journey?

Ya know, I had watched about every cycle touring documentary I could find. Every YourTube video and blog I could find. Yet it still seemed impossible to me, I hadn’t really ridden a bike all that much since high school and I was a chain smoker and completely out of shape. Then after a road trip to Burning Man and quitting my jobs, I went to Big Bend National Park in the deserts of SW Texas where on my 1st night there I met Tim and Noah Hussin, two brothers on a cross country bicycle adventure filming a documentary called America Recycled about radical off grid communities.

We all camped together for a few nights and I really got to know them and listen to their stories of life on the road. Though it still seemed a bit impossible for me to do it, the idea really stuck with me and eventually they would be the inspiration that got me to really do it. As Tim told me, the hardest part was the first pedal. Quitting you job, setting the date and just starting.

What is hardest thing about your journey?

Keeping up with a website, social media, finding hosts and reaching out to local media to promote local shelters. All these things take time and a bit of planning. It’s easy to get behind and when you do, it's very difficult to catch back up again. I will go to coffee shops and use their wi-fi and sometimes it takes hours just to find a host, let alone all the social media stuff. Facebook, Instagram, Twitter, Linkedin — there's more and they all take time to use most effectively. Other than that, big hills. My bike is well over 200lbs and Bixby is 50lbs so when we get to big hills, I’m pushing. How long have you been cycling for?

We started May 15th 2013. Pretty much been pedaling every since.

Does Bixby do any pedalling?

Not yet and it’s totally her turn. Two years and 9,200 miles later, I want to relax in the back and get belly rubs and treats. Still working on leg extensions for her. Ultimately though, she knows she’s the star of the show and I would be lost without her. Literally, she’s my navigator.

What is your earliest cycling memory?

Then when I got a little older and got a bigger bike, I would ride for miles with my boom box on the back, again way farther that I was allowed to go. It was sorta my first big freedom to travel. Crazy how years later in high school, I felt too cool to ride a bike then I got a car, started smoking and never really rode much again. There were certainly years where I would never ride at all.

What one cycling product would you never be without?

Chicken Charlie (our rubber safety chicken). Some may scoff, but he’s been with us since the beginning and no one has hit us and we’re still at it. He hangs off the back of our bike and vigilantly keeps watch behind us. Someone gets a little too close he Squawks at them the “Cluck Off!” So far it’s worked out great.

A close second I guess would be my bike itself for the trip would be impossible without it. There’s lots of things that make it more enjoyable (bluetooth speaker, smartphone, solar panel, camera, etc.) ultimately though, me, Chicken Charlie and Bixby, everything else is koosh! 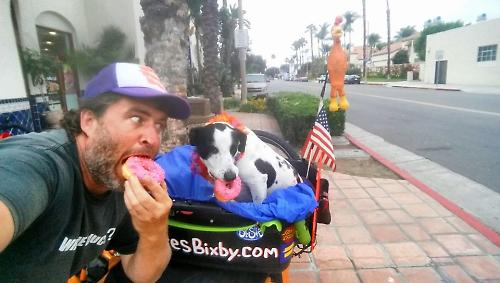 Where has been your favourite place to ride?

I probably have to give that to the California coast just from a beauty standpoint and the weather. Big Sur, I mean Wow! Though I pushed my bike through half of Big Sur.

On a different level, New York City (Manhattan). I was pretty apprehensive as I pedaled into NYC. So much traffic. Such a busy city. Though as I crossed over the Brooklyn Bridge, that changed. The Brooklyn Bridge is like pedaling over history and once I entered into NYC and saw the man dressed like the Statue of Liberty doing the Michael Jackson Thriller dance, I realized that this was going to be great.

Watch out for the Cab Drivers, but other than that, I can’t wait to go back to NYC and ride my bike again.

Pedaling in a Mardi Gras parade was pretty epic as well. I’ll stop there or I convey that it's hard to pick a favorite because so many places are special. Perhaps one day I will say the UK was my favorite place. (Hear that sponsors?)

What is your favourite cycling fuel?

When I stop for a while, a week here of there, old habits come back and I just want pizza and junk food. It’s best I just keep biking.

Has stardom gone to Bixby's head?

That’s also an awesome question. She’s certainly gotten a lot of attention across the country. For the past year and a half we’ve been featured on the news and in newspapers in nearly every town we have visited. Usually by the time we leave an area everyone knows Bixby by name; Chicken Charlie too for that matter. I’m just the sweaty guy that pedals her around.

Having the media attention certainly helps with finding hosts as we journey. We stay with complete strangers probably 90% of the time. The rest we camp in crazy places like high atop a water slide in Ocean City Maryland, rooftops in L.A., 200 year old barns in Maine and sailboats in Florida.

It’s fun having people come up and tell us that they saw us on T.V. or read about us somewhere. Bixby has never met a stranger and is eager to teach people how to play fetch everywhere we go. She had become a little snobby as far as the treats she eats. She’s offered so many that she snubs certain generic treats.

How can our readers support your campaign?

Share our story. We're on all social media and wheresbixby.com. We really hope to find the right sponsors to help us stay on the road. Bixby clearly should be a spokesdog. A dog food company?

She already is a spokesdog and a wonderful ambassador to shelter dogs everywhere. She’s a mutt and there are Bixbys in every shelter everywhere and if allowed, they will bring you on one incredible journey. You just have to give them the chance. If they want to support directly, we have a paypal on our website and Facebook pages and we sell Hug Your Dog t-shirts that help keep us on the road.Those can be found on our website as well. Soon we will write a kids book about our adventures through the eyes of a rescue dog as well. My bike is a Yuba Mundo Cargo Bike and I have the bottom half of a large dog crate mounted on the back. We’ve now covered approx 9,200 miles over two years through 31 states. I've visited over 100 shelters and learned so much on this trip.

It has also somewhat restored my faith in people. We mostly stay with strangers. People come up and just start conversations with us. We make everyone we pass, from kids to bikers smile and point and want to stop and take pictures. I don’t have to pay gas, insurance, registration worry about tickets or speeding. I’m forced to slow down and actually experience the country as I pedal through. I smell it. I feel it. I live it.

I was a bartender who spent my time mostly behind a bar slinging drinks. Now I’m an inspiration to other people just like the Hussin brother were an inspiration to me and I spend my time behind handle bars slinging smiles and puppies.

As Bixby told me as I was contemplating as to whether I could do this or not: dreams are like sticks, you just have to chase them. What I’ve learned since then is once you catch up with that stick that you’ve thrown, you have to pick it up and throw it further on down the road. My dreams are huge now. Bixby the cartoon? Bixby the animated movie? Either way the adventure will continue.

I will also say that this journey began with a Burning Man ticket a friend gave me back in August of 2011. I, feeling complacent and like my life was flashing before my eyes, decided to quit my jobs, sell my stuff and buy a truck with a camera top to hit the road. I bought the truck so I could bring Bixby. That truck broke down everywhere and eventually left me stranded and penniless in the ghost town of Terlingua, Texas in the shadows of Big Bend National Park.

Those brothers ended up hanging out down there for over a month for it was a radical off the grid community. I was offered a bartending gig and a school bus to live on for free and ended up falling in love with that funky town and I lived on that bus for over a year. I really got to know those brothers and the down time allowed me to regroup and find a cargo bike and eventually head out on this adventure.

It’s funny how things happen. The best decision I’ve ever made was walking away from my comfortable, stable life and treating my life like an adventure and not a chore. I will never regret this decision.