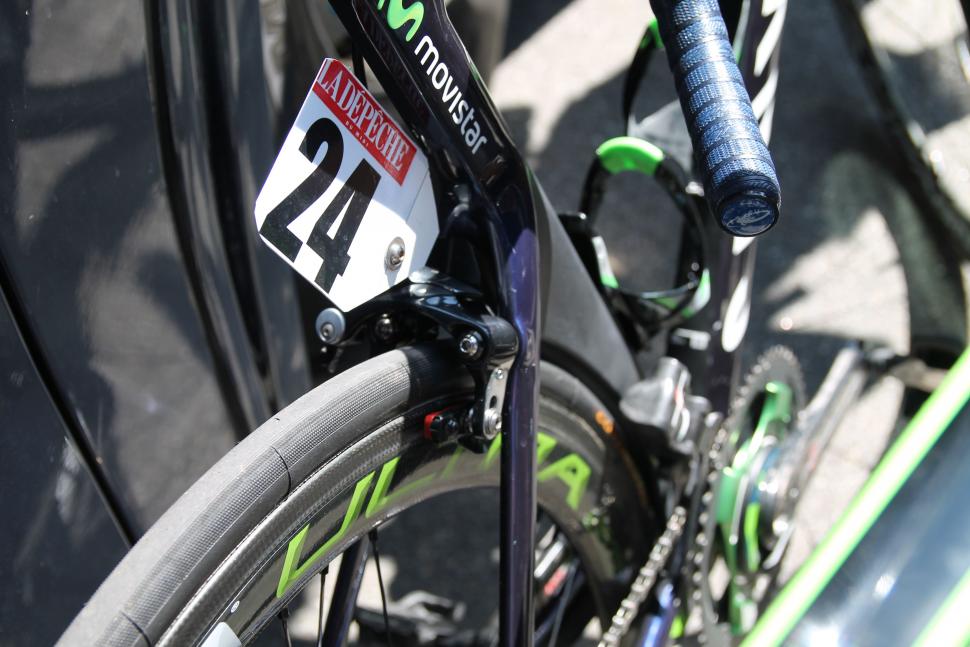 10 things you only see on pro race bikes 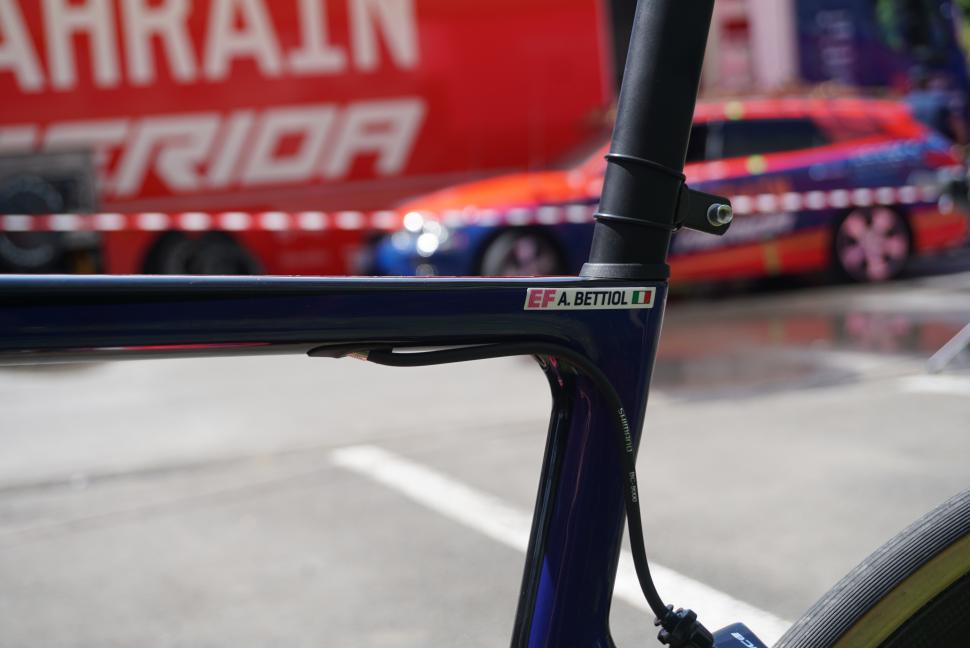 You always see a sticker with the name of the pro racer that the bike belongs to on the top tube of the frame. Sometimes it’s accompanied by a country flag or, and I've only seen it a couple of times, a Twitter handle. It makes it easy for spectators and mechanics to know which bike belongs to who when parked up against the team truck of cafe window. 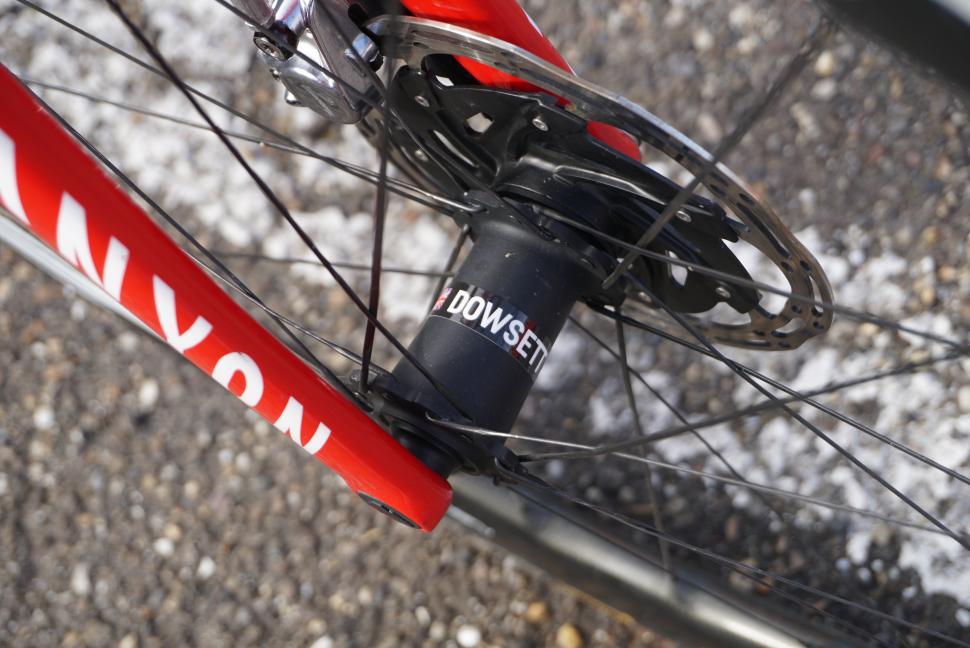 We're even starting to see names on components, especially wheels. Katusha has added name stickers to wheels clearly intended to make it easier to identify the right wheels for the right bike. The wheels are all identical obviously so it makes little difference, but it might be because each rider has a tyre pressure preference so this is perhaps one way of ensuring each rider gets the right tyre pressure?

There might be calls for number plates to be required by cycle commuters, but pro racers already ride with a number plate. It's typically attached to the rear brake with a special adapter, but sometimes it's fixed to the seatpost. Along with jersey numbers, it makes it a bit easier to distinguish a rider in a bunch. It’s also useful for a team mechanic when arranging the spare bikes on top of the team car. 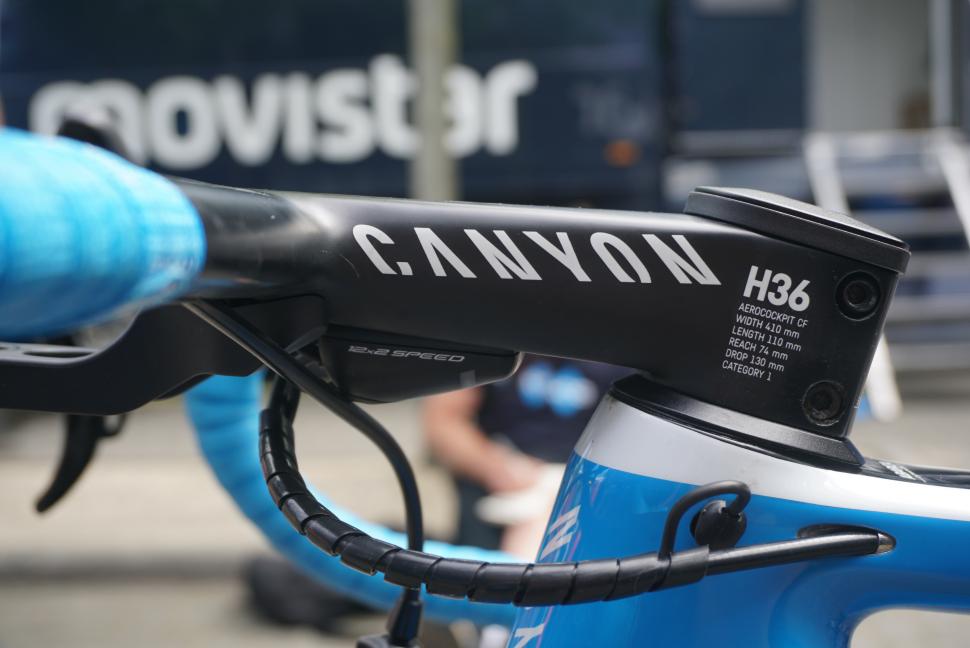 If there’s anything that sets a pro race bike apart, it’s the penchant for long and slammed stems. Pro racers like to get very low at the front, for aerodynamics, and they like to stretch out, too. In the olden days, racers would have steel frames custom measured to fit, but these days most pros (with some exceptions) have to fit a stock carbon frame size. That often means a racer will ride a smaller size frame and sort the reach out with a frankly ridiculous length stem, with 140mm quite common and even 150mm stem occasionally spotted, as in the picture at the top of the article. 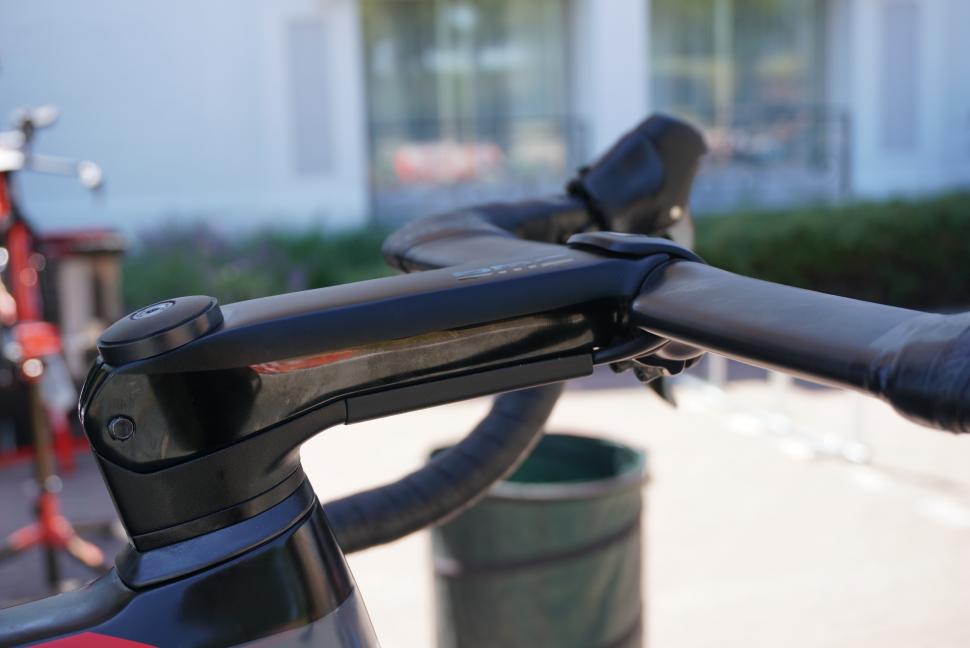 It’s worth remembering that the colossal hours of riding the pros clock up every year means they can maintain a position that might have us phoning for a chiropractor after 30 minutes in the same position. That’s why you should never emulate the bike fit of a professional, but instead, get a bike fit that is right for you. 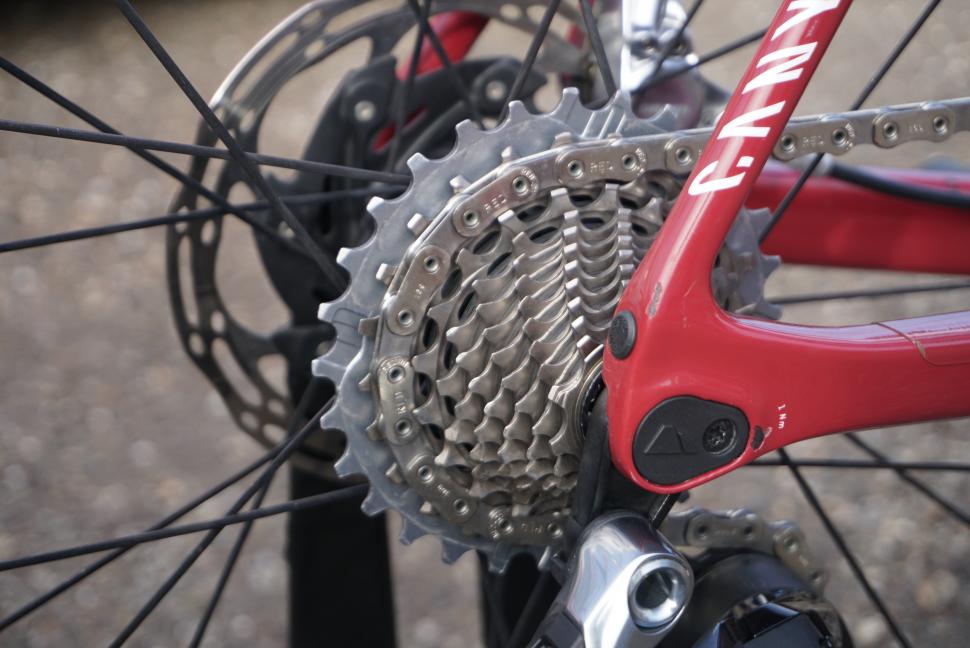 Cassettes so clean you could eat your dinner off... not that you would ever want to. Pro bikes are cleaned after every single training ride and race so they’re always immaculately clean, there’s never the chance for grime and dirt to accumulate on any of the moving parts. During the bigger races, bar tape is sometimes replaced daily so the bikes always look like they’ve just rolled off the shop floor. Chains are frequently replaced, nothing is left to wear out. 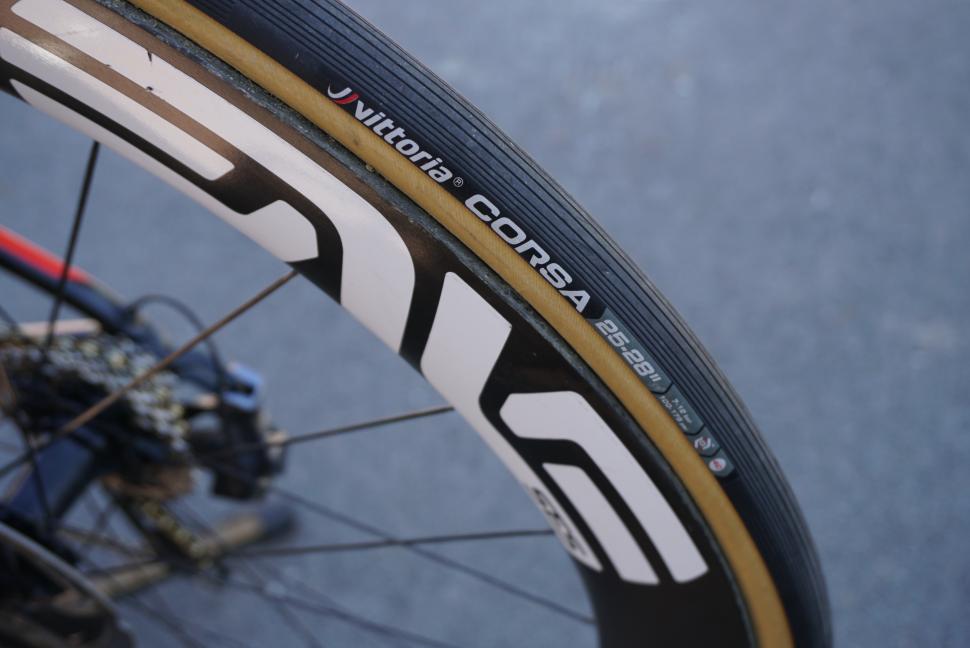 Most regular cyclists use clincher tyres, easy to remove and change an inner tube when you need. All pro bikes are fitted with tubular tyres, though, which require the tyre being glued to the rim. A tubular tyre glued to a carbon wheel is currently the lightest setup, because the rim construction is simpler, and in a sport obsessed with weight (though limited by the UCI’s 6.8kg weight limit) every little bit of weight can make a difference.

It’s not just the weight. One of the key reasons that pros still use tubular tyres is because you can still ride with a flat tyre - a punctured tubular tyre won’t blow off the rim. An inner tube blowout with a clincher setup, whilst unlikely, can be potentially dangerous. So a punctured tubular tyre can still be ridden on,  at reduced speed, usually long enough to receive a spare wheel from the following team car or neutral support. 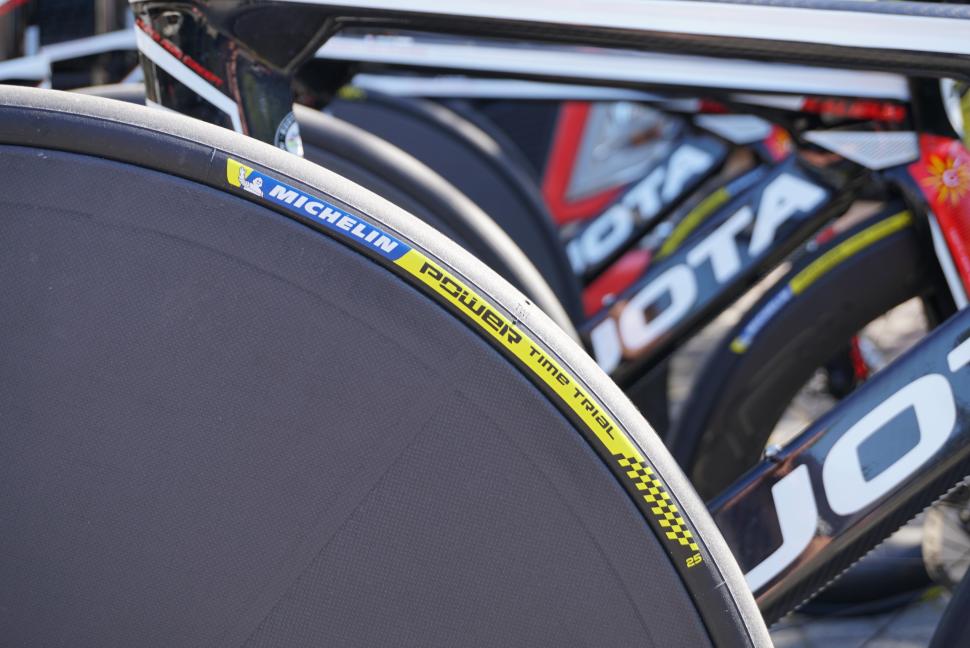 All that said, we're starting to see clinchers and tubeless tyres become a bigger presence in the Tour de France. This year several teams were rolling out clinchers for the time trial stages because there is plenty of data to support the fact that rolling resistance is lower with a clincher compared to a tubular. 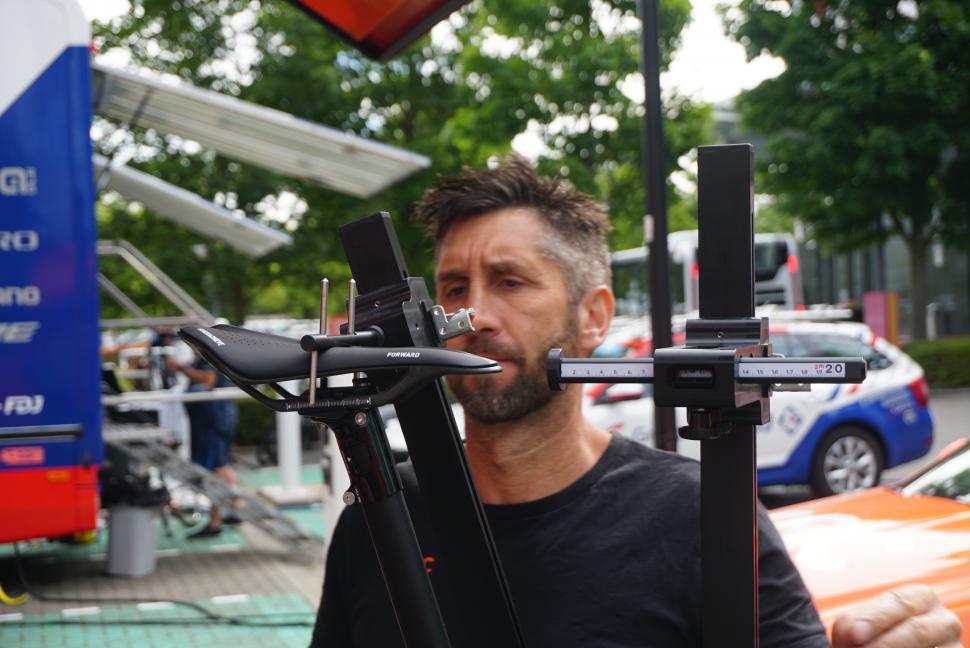 Aluminium and classic round handlebars Most pro race bikes are fitted not with carbon handlebars, but aluminium handlebars. There are two reasons. The first is that, often, a bit of extra weight is needed to ensure the bike doesn’t dip below the UCI’s 6.8kg weight limit. Adding a metal handlebar might be enough of a difference.

An aluminium handlebar is more durable as well and should take the knocks from a few crashes and being transported between races better. That’s not to say you don’t see carbon bars, they’re just outnumbered by aluminium bars, at least based on my experience of looking at hundreds of team bikes over the years. 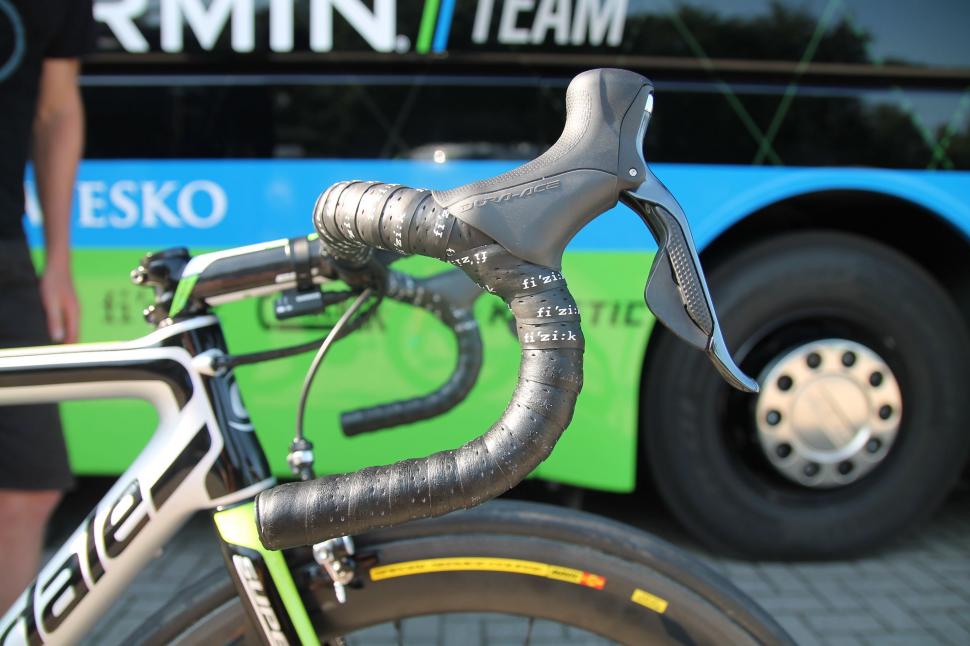 Handlebar shape is another noticeable thing that sets a pro bike apart. Despite a wide range of handlebar shapes and the popularity of ergonomic and compact bend handlebars on production bikes, a large number of pro racers still favour the classic round bend handlebar. The deep drop and long reach won’t suit everyone, but will if you’re a sprinter and want a super aero tucked position. 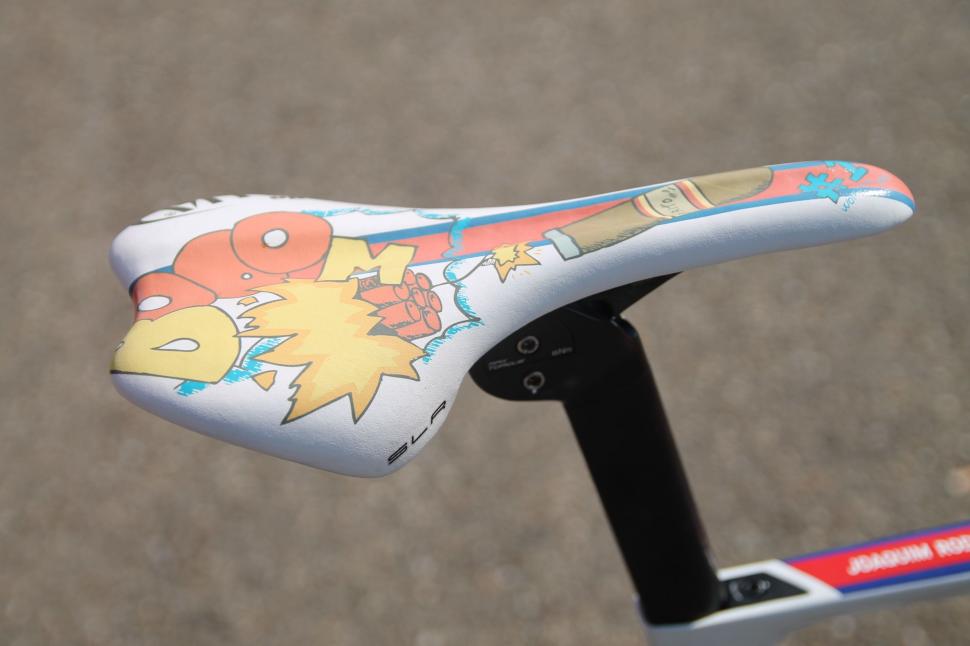 We don't see this as much these days, which is a shame. The saddle is ripe for customisation as it’s a large canvas for a bit of creativity, and it’s relatively easy and cheap to do. And it's a good way of getting a bit of exposure in a cycling magazine because for some strange reason we always photograph the saddles. But we didn't see any this year which is a crying shame, so here's one from a couple of years ago. 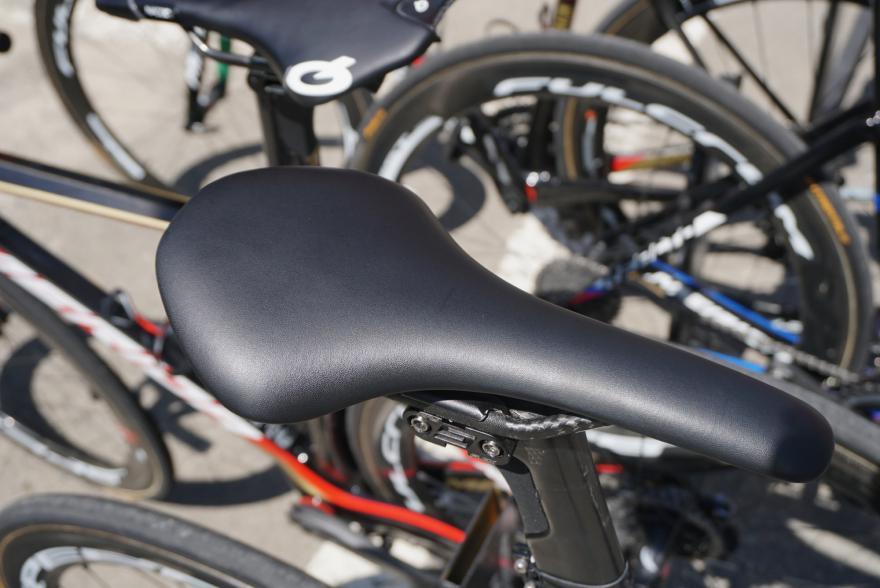 You do however sometimes see riders using saddles from other brands that the team aren't sponsored. Like this Fizik saddle being using by Vincenzo Nibali instead of the Prologo saddle he should be using. 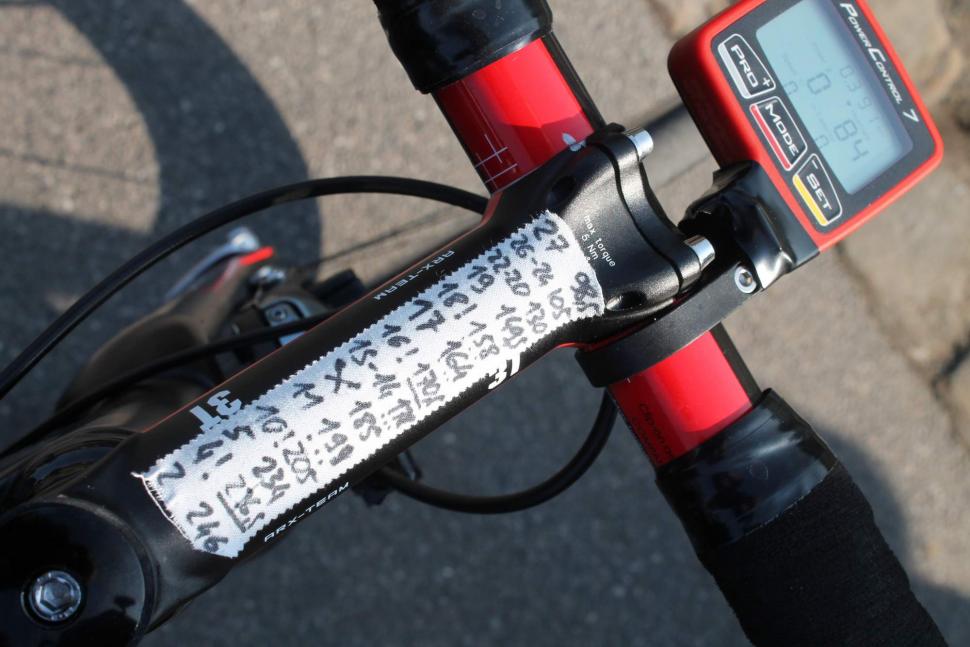 Pros race on closed roads so don't have to worry about navigation, but you very often see small bits of paper marked with notable hills, cobbles, sprints or feed stations, taped to the stem or top tube. It provides the racer with a quick glance at any upcoming challenges so they can be in the right position in the bunch to serve their duties that day, whether it's leading coming into a cobbled section of the foot of a climb. But in a sport packed with cutting-edge technology, it does look a bit odd. There must surely be a better way? Measuring power has become a critical part of pro racing these days. It provides much more efficient training, lets a rider target a key power output in a time trial or measure their effort in a breakaway, and help analyse the stage in terms of energy used and other key metrics.