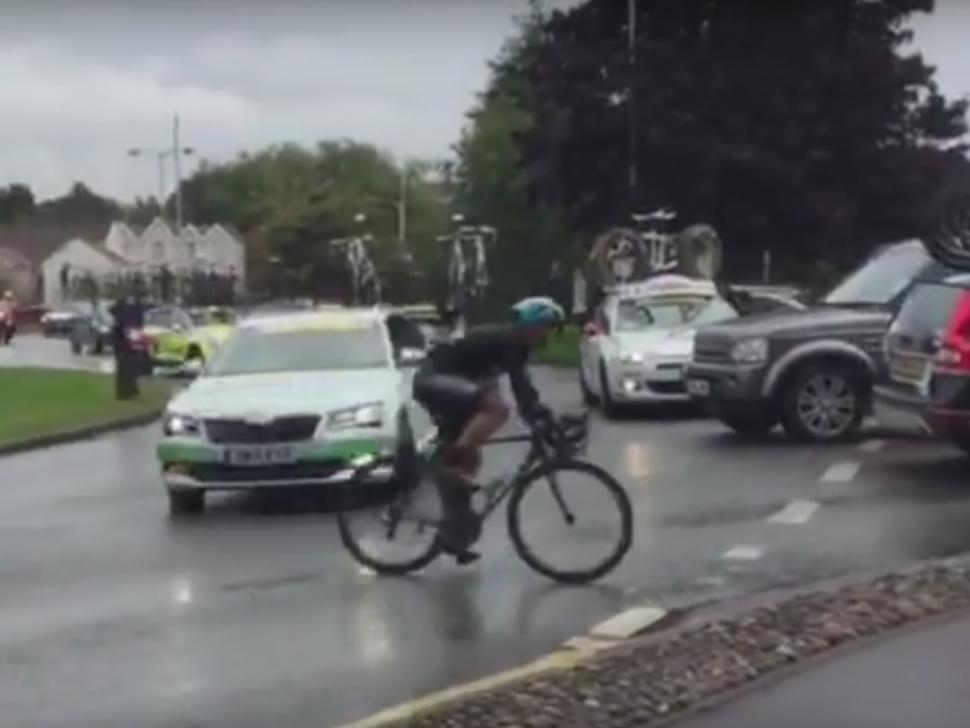 Tour of Britain support cars caused chaos on a Norwich roundabout this Saturday. With no marshals, no barriers and no signage, a number of them missed a left turn. As you can see in the video, this resulted in all sorts of manoeuvres on the roundabout despite the road being open to traffic coming from other directions.

The incident took place at the Halfords roundabout. We see the majority of the peloton and one wave of support cars turn left onto Barn Road before a gap, after which a Tinkoff-Saxo car goes straight on, leading all the vehicles behind in the same direction, plus one of the team’s own riders.

The Eastern Daily Press reports that there was also confusion in the Golden Triangle area as a group of riders went down Unthank Road instead of Earlham.

(Warning: the video contains the odd bit of swearing.)

Some cars stop and reverse, some come back the wrong way round the roundabout, while others turn into the lane of oncoming traffic.

As it happens, road.cc news editor Simon MacMichael was in one of the team cars as it threaded its way through Norwich. Here’s what he has to say.

“It was a stressful day’s racing from the off with Madison-Genesis getting a rider into the break as they tried to wrest the mountains jersey from Pete Williams of ONE Pro Cycling, whose team rode hard at the front of the peloton to keep the break in check.

“Race sponsors Aviva are based in Norwich, and the parcours twisted through the city centre, with the rain failing to deter big crowds, but there were some sketchy moments, including spectators, perhaps unused to a big bike race, standing in the middle of the road.

“Due to a couple of crashes on the wet roads and cobbled streets, the race convoy split, and that seems to be what caused the confusion here (and this wasn’t the only place in the city where race vehicles went the wrong way).

“With rolling road closures, the police outriders and civilian motorcycle marshals who help manage the race’s progress were presumably up the road – a marshal here pointing the convoy to the correct route, or clearer signage, and this incident could have been avoided.

“It’s true the race manual does have a detailed itinerary that includes directions of which exit to take at roundabouts etc, but with the driver having to concentrate fully on negotiating the streets, and the mechanic needing to jump out to service a rider, that was the last thing on anyone’s mind.

“Organisers SweetSpot have done a fantastic job in building the profile of the race since relaunching it in 2004, and certainly from talking to some of the sports directors in London the following day, there is a lot of appreciation for the work Mick Bennett and his team have done in making it so successful.

“Incidents like this do happen even on the biggest races from time to time, and thankfully on Saturday there were no serious consequences, but hopefully it can serve as something to learn from for the future.”

Greater confusion than this was seen at the recently-completed Tour of Alberta in Canada. There, the entire peloton was forced to do a U-turn after going the wrong way. The lone leader, Cannondale-Garmin’s Lasse-Norman Hansen was one rider who went the right way and he took the win. Meanwhile, Trek Factory Racing's Laurent Didier, who had been dropped, effectively overtook the entire field while they were taking their unscheduled detour and secured an unlikely second place.