Close-passed by the police: a cyclist's (unsuccessful) battle for justice 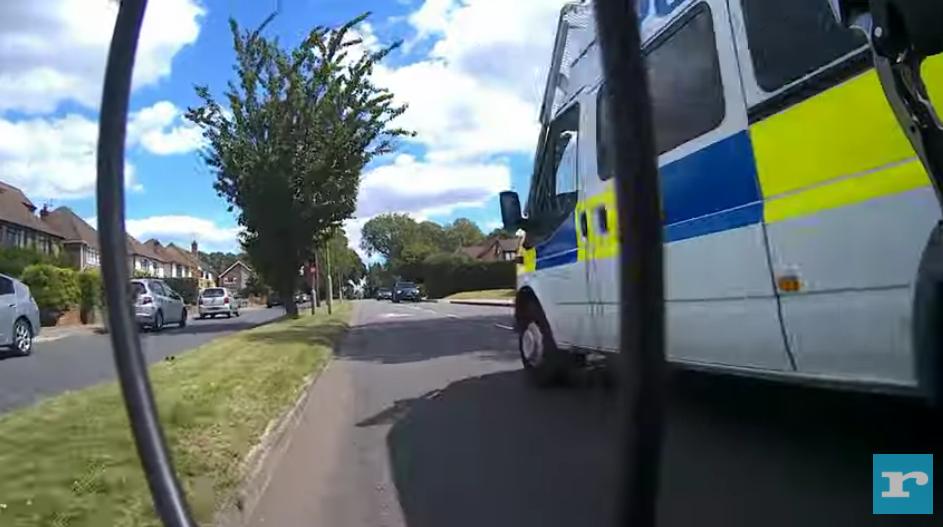 nmotd 521 screenshot.PNG
What happens when a cyclist complains to the police, about a close pass from a police van? This road.cc reader found out, and didn't exactly get the outcome he wanted...

Back in January, road.cc reader Moray sent us a video of him being close-passed by the driver of a police van, which became the subject of Near Miss of the Day 521. "Not the worst I have ever experienced, or reported, but you do expect better from a police driver," he explained, which is what prompted Moray to go through the Hertfordshire Police complaints process. Nine months later, he says he is finally at the end of the road.

Moray gave a very detailed account of his experience with the complaints process back in January, and now over three months on he has contacted us with some more surprising revelations after challenging the Professional Standards Department's review. Here's his story...

"After 9 months of plodding through the complaints process around the events of NMOTD 521,  I have probably reached the reached end of the road with this case; an experience from which I draw two conclusions:

1) It is pretty hard to get 'close-pass' guidelines applied to police vehicles in Hertfordshire, with additional excuses made up as necessary to ensure it doesn't happen.

2) Any cyclist should NOT vote for David LLoyd, the incumbent PCC [Police and Crime Commissioner] for Hertfordshire on 6th May.

Following on from the long drawn-out process I described in Near Miss of the Day 521, I challenged the PSD review of this case - because I was apparently seeing double standards. Here's why:

- A Herts Police website article about 'Operation Velo' referring to the 'optimum distance to pass a cycle – 1.5m' - as apparently only applicable to the general public

- One 'close-pass guidelines not applicable' (NMOTD 521, for a police vehicle) and multiple comparable and contemporary 'appropriate positive actions' cases (for other drivers)

- Four additional excuses for the police driver which are not supported by the Highway code:

- An FOI response that said that Herts Police Digital Evidence Team have no written procedures for evaluating a 'close pass'.

I pointed all this out, however the PSD refused to investigate any possible double standards on the grounds that I was seeking to "expand the already recorded allegation", and told me I'd have to make a new complaint.

> Why does road.cc do Near Miss of the Day?

OK, so I played the game and made a new complaint about the double standards with a submission citing all of the evidence I had seen, starting again at square one with the PCC's Office.

A few weeks later the PSD came back with a response amounting to 'no problem with the original case, and we'll ignore the other cases'. The review failed to answer the question of what and when any close-pass guidelines applied; and just to round it off, added a new excuse for the original case:

"It is not possible to accurately measure how far the van was away." (i.e. the specialist 'Digital Evidence Team' are pleading inability to measure/judge distance from the video).

Continuing to play their game, I pointed out the flaws in their response and escalated it again; this actually just goes back to the Office of the Police and Crime Commissioner (OPCC), so I had low expectation of a different result.

Some more weeks later, and as expected, I got another very wordy 'no problem' response, with one glaringly ridiculous action:

"With regards to the subject of Op VELO, the CTC Unit confirm this was a Cambridgeshire Police initiative in Cambridge City centre" (which is NOT what the article itself says!)

"Removal of Op VELO from the websites has been requested."

So, the absolutely brilliant idea from the OPCC Review Team was to delete the article to improve the situation! Indeed, they went on to say:

"I will ask the PSD and the CTC Unit to place some focus and priority on this matter."

So, it turns out that the final important action - the one for "focus and priority" - from all of the reviewing of when, where and how close-pass applies is to remove any evidence from the Herts Police website that Herts Police been involved in (any) close-pass enforcement operation! I think it is truly disturbing that the PCC's Office want to actively delete an inconvenient article that the Chief Inspector of the BCH Roads Policing Unit originally pointed me at. 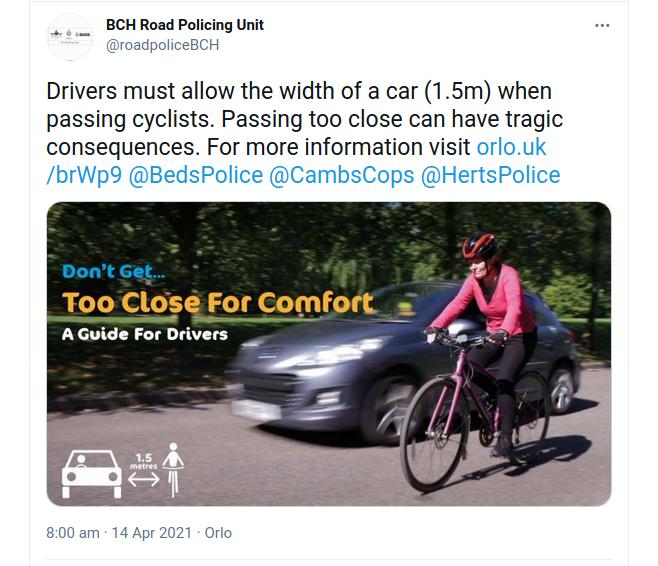 It gets worse, because the fatal flaw in this plan to suppress any mention of a close-pass standard that might be applicable in Hertfordshire is that Bedfordshire, Cambridgeshire and Hertfordshire (BCH) combined Roads Policing Unit recently tweeted an endorsement of the Cycling UK close-pass guidelines as their contribution to the 'National day of action on close-passing' (14th April) promoted by the National Roads Policing Operations and Intelligence (NRPOI) unit.

So, although I should no longer be able to cite the to-be-deleted 'Operation Velo' article at them, I can now cite the BCH Roads Policing Unit tweet. Difficult to make this up!

The incumbent Hertfordshire PCC, David LLoyd, has himself not seen fit to respond himself about this so far; nor respond to any previous question about safety of vulnerable road users and what he is doing to help. His 74 page 'Community Safety and Criminal Justice Plan for Hertfordshire 2019 - 2024' fails to mention the word 'bicycle', and his re-election manifesto also says nothing about the subject.

On the basis of all of this, I'd say that any cyclist who is remotely concerned about road safety for vulnerable road users in Hertfordshire should certainly NOT vote to re-elect David LLoyd on 6th May!"

Have you had similar negative experiences when reporting dangerous driving, and want to share your story? Email us at info [at] road.cc