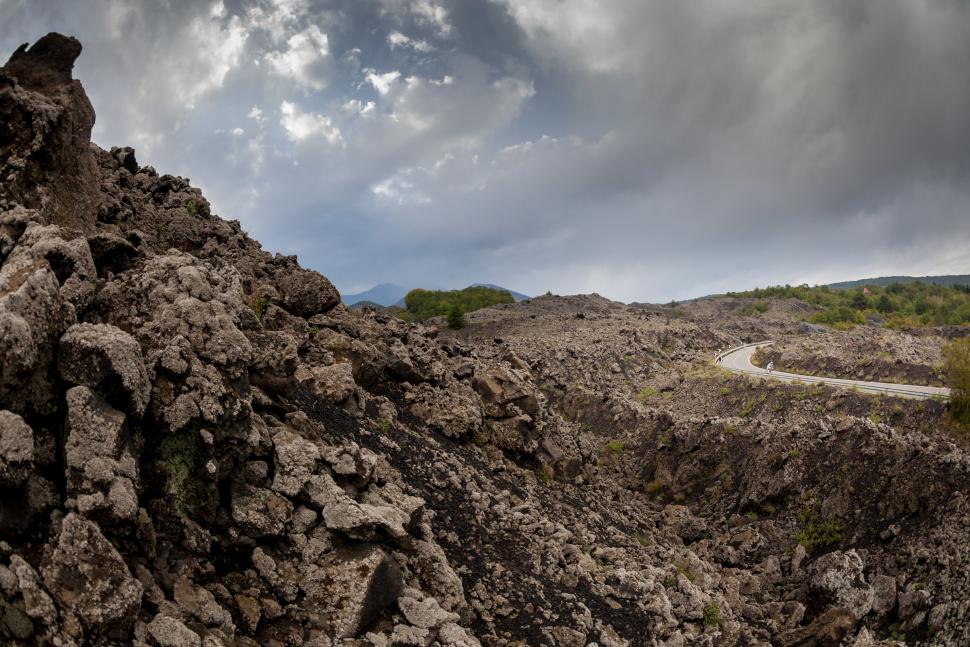 Descending Etna Scenic (© Irmo Keizer : Shimano)
We've tried them, they work. But until we properly test them, discuss...

We spent three days in Sicily trying out Shimano's new disc brakes, and Ultegra Di2. The first ride was a bit squeaky but with impressive power from the discs, and on the second day I got to know them a bit better as they started to bed in. And on the third day I didn't use them at all.

Instead I took a bike with full Ultegra Di2, complete with Ultegra rim brakes and Ultegra alloy wheels, back up Mount Etna (note to Shimano: if the press camp is on the side of a mountain you might want to pack some compact chainsets next time). I took a slightly different route further up, and didn't go all the way to the top, but with the last 6km of descending was exactly the same as I'd experienced with discs, in very similar conditions.

And the conclusion? Well, the first thing to say is that the new Ultegra dual pivot callipers, which use the same symetrical pivot design as Dura Ace, are very, very, very good. Those callipers, with good pads, biting onto dry, alloy rims: that's about the best performance you can expect from a cable-driven rim brake right now. They're exceptional.

Did I feel like I was wanting for power? No. Did I feel that the bike was harder to control than with discs? No. They were just the ticket. And they didn't need bedding in either. So on a nice open descent like Etna, in the sunshine, on dry roads, you're really not getting any advantage from a disc-equipped bike. We learned that.

Discs aren't really about increasing the maximum amount of stopping power you have, though. They're about allowing you to make use of that maximum stopping power independent of the conditions you're riding in, and the other equipment you're riding with. We didn't get a chance to test the brakes in the hosing rain, and we didn't try the disc brakes vs rim brakes test with carbon rims, either. Both of those would probably start to tip the balance in favour of discs. Until we have a set for a full test – and that will probably be January – it's difficult to say how much difference having discs will make in less-than-ideal conditions. Having spent plenty of time riding on the road with both mechanical and mechanical/hydraulic hybrid systems I'm going to stick my neck out and suggest the difference in the least optimal conditions – on a carbon rim, in wet conditions – will be substantial. Game-changing, even.

I'm looking forward to giving them a proper test in our filthy winter, because it's my considered opinion that disc brakes are a better solution than rim brakes. In every other application they've been tried, they've soon become the standard. That's not to say that this first incarnation for road bikes is going to be perfect, because it won't be. Discs on mountain bikes taught us that: look at them then, and look at them now. Road hydraulic discs work though, and that's a good starting point. And more than can be said for some of the version-one mountain bike units…

To finish off I'd like to address a few arguments against discs which I believe to be either erroneous or irrelevant, or at the very least unhelpful. Here they are:

And now, disk brakes are ugly.

3: The pros will never adopt them, everyone will lose their fingers, etc and so on

The professional racing scene is an interesting issue, because at the moment you have a support mechanism (neutral service) that's based around a very strict and universally-accepted standard. For the sport to switch wholesale to discs will require a standard for discs to be agreed. That's hardly a deal-breaker, but it'll probably take some time. Years, in fact.

Disc tolerances are much tighter than callipers, and neutral wheel changes will need to work. For that reason, adoption of some kind of accepted thru-axle standard is probably a prerequisite for pro racing on discs, as thru axles work to closer tolerances than quick releases. On top of that they're a much better, and structurally significant, way of attaching a wheel to a frame or fork, and will make it easier to create stiffer framesets to handle the disc forces. Will it mean slower wheel changes? Probably. A bit.

Do the pros want discs? Some do and some don't, probably. Andy Schleck does. I haven't specifically spoken to any other pros about it. I'm guessing there's mixed feelings.

Does everyone have to be on discs? Probably. More because that appears to be the UCI's main concern – that a disparity in braking capability between riders will lead to more crashes in the peloton – than because it's a neccessity. Clearly there's a massive discrepancy in braking capability between professional riders already, which is why Vicenzo Nibali or Alberto Contador can take minutes out of, say, Andy Schleck or the new more cautious Bradley Wiggins, on a long descent in the wet. It's difficult to know how discs will affect that disparity. If anything, it'll make very little difference. Nibali out-brakes Schleck because he's a better descender, not because his brakes work more effectively.

Also, crashes in the peloton, especially at professional level, very rarely have anything to do with braking. Mostly it's people clipping wheels or bars, and going down, taking others with them. Certainly in sprints, where a large chunk of crashes happen, no-one's hauling on the anchors.

And will people's fingers get sliced off? Well, it's a possibilty, in the same way that it's a possibility that someone's chainset could slice their jugular artery. A possibilty, but unlikely to be the top of your worry list in a crash.

And anyway: why does it matter? You're not a professional rider (professional riders reading this excepted), and if you're racing at anything below premier calendar level in the UK it's unlikely you'll have to worry about it for at least the next five years. Probably a decade. We should be making decisions on what equipment we have on our bikes based on whether we think it'll benefit our riding. If your good bike rarely goes out in the wet, then you probably don't need discs. If you think they're ugly, then don't buy them. If you have one bike that gets used all year, you might find them an improvement. Make your choice. And you'll have one for the foreseeable future: rim brakes aren't suddenly going to disappear.