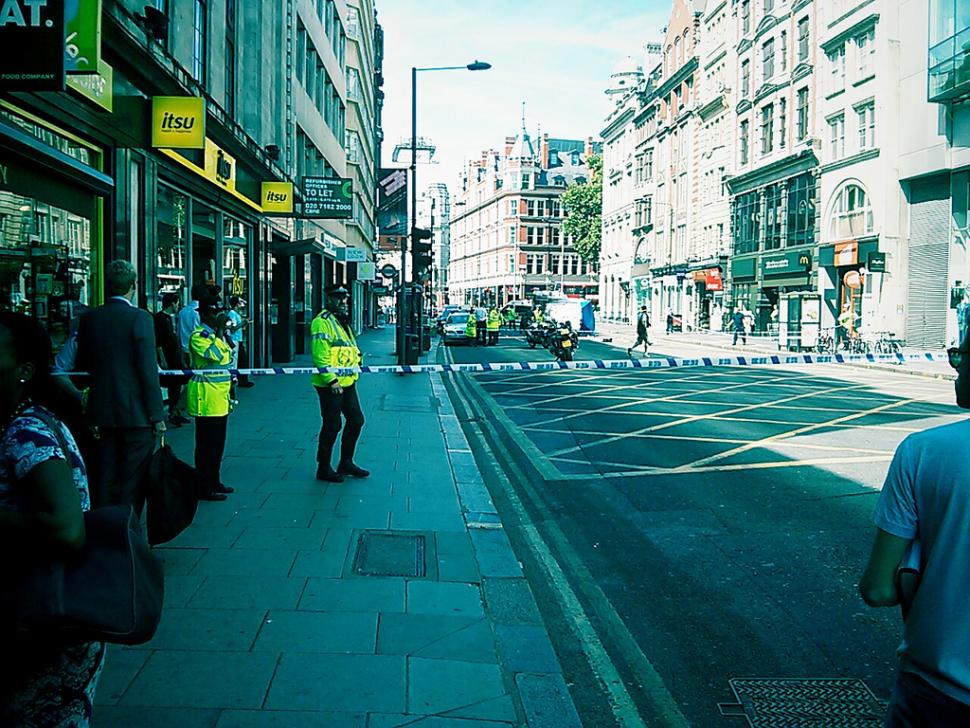 High Holborn (copyright Andy Waterman)
"The idea that that bus lane is too narrow is hokum."

Andy Waterman is editor of Privateer magazine. On Monday he was held up on his way to work by the road closure in the wake of the death of Alan Neve. This is his take on one of the possible causes of that crash, that cyclists are forced to take a dangerous route along High Holborn instead of being allowed to use the bus lane on Theobalds Road.

This morning a cyclist died on Holborn, just outside the tube station afer being crushed by a lorry. When I came into work late, the police still had the area on lockdown, as can be seen in the photo above.

As I rode past Cycle Surgery onto Holborn a police woman told me to look after myself.

Thanks, I will, I thought. But what are you doing to help?

I’ve only just started working in this area, so I’m learning the roads and my route to the new office. Last Wednesday was my first ride in. I came along Theobalds Road, and where the traffic turns left down to Holborn, I carried straight on in the bus lane, heading towards Bloomsbury Way. I waited at the lights at the crossing of Kingsway, where a fine fellow spoke to me to warn me that the police were waiting across the junction fining cyclists riding in the bus lane. This bus lane runs contra to the main flow of traffic, but is only about 200m long, and the fastest, safest way to get towards Oxford Street. I thanked the man, got off and walked across the junction.

Sure enough, the cops were waiting on Bloomsbury Way fining cyclists. Another pedestrian pushing a bike (like me) stopped to ask why they were doing it. “It’s busses only” they said. But why? we asked. “Because it’s too narrow for a bus to pass cyclists safely, you have to go round.”

Going round involves dropping onto Holborn and negotiating four lanes of traffic. I’ve done it every day since and it makes even me, an experienced cyclist nervous. Motorbikes buzz you, taxis rush red lights to get through and huge trucks obliterate the view. It’s hellish.

So it was sad but unsurprising to find a cyclist was killed there this morning. Stupid road planning is to blame, as are the police for enforcing a rule that prevents cyclists using the safer bus lane along Bloomsbury Way.

The idea that that bus lane is too narrow is hokum: A - show me any bus lane in the land that allows busses to pass cyclists with the amount of space recommended in the highway code; B - it’s only 200m long, even a slow moving commuter on a Boris bike won’t hold the bus up too long in such a short space.

The fact the police were targeting cyclists on this stretch only five days ago smacks of money grabbing opportunism, the real world safety of the issue be damned. If I wasn’t so resigned to the fact that we are second class citizens, useful only as a cash cow to prop up dwindling tax revenues, I’d probably be furious right now. As it is, it’s just another depressing day for London cyclists.