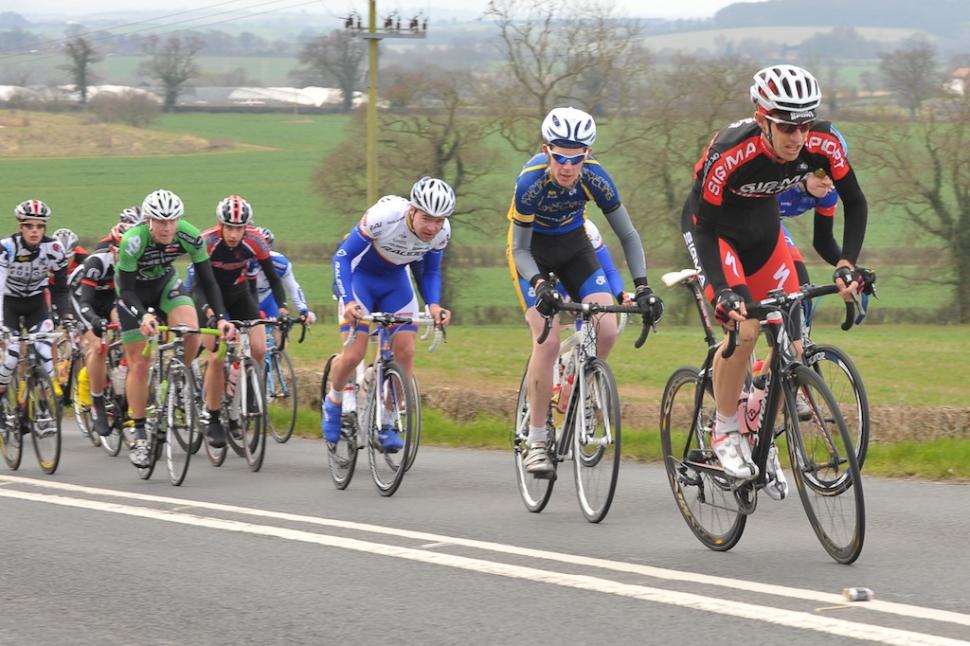 Liam Glen heads off to Evesham with John Whittington to take on the Evesham E123:

The stench of embrocation was all pervasive in the makeshift changing room as riders busied themselves with their personal pre-race rituals. The chatter was sparse and there was a nervous energy about the room – or maybe that was just me. It’s safe to say I was feeling a little out of my depth...but let’s rewind and start from the beginning.

It was an early morning start for fellow Uni rider John Wittington (CNP – Orbea) and me as we made the trip up the M5 for the Evesham Vale Road Race. A quick look at the start list did nothing to calm the pre-race jitters; it was a stacked field all round featuring a number of professionals. The only eight man team was Raleigh who were back in force to defend Liam Hollohan’s title from last year. This would not be an easy introduction to serious road racing.

The anticipation built during the neutralised roll-out as we waited for the flag to drop and real racing to begin. Immediately the pace went sky high as breaks were formed and brought back. Soon enough an acceptable 5 man group featuring three Raleigh riders got away and the pace in the bunched eased. Two more riders including Liam Hollohan bridged across soon afterwards making it Raleigh’s race to lose. That’s what the official race reports say anyway; I was too busy chewing on my stem at the back of the bunch to notice anything much.

With the easing of the pace, I got the chance to move about the bunch a bit and even had a little dig off the front with a couple of others, something I would later regret. It was a nothing move really, and we were soon brought back into the fold. With Raleigh unwilling to work, an effective chase was never organised and the pace oscillated constantly as riders tried their luck individually. With 1.5 laps remaining a strong surge at the front split the peloton with a strong group featuring Simon Richardson and both Motorpoint riders pulling away. In a moment of naive over-confidence, I attempted to bridge across but ended up stuck in no man’s land being buffeted by the wind. The effort that followed felt like it lasted an eternity but in reality, was probably only less than a minute. And with that my legs decided that they were done. I could only watch as the peloton blew by me at warp speed followed soon after by the commissaire’s car. Ouch.

It’s a lonely experience riding around alone after getting dropped, rewinding that fateful moment over and over in your mind. The temptation to ditch back to the car early was strong, but I decided to bash out another lap reasoning that it would be good training. Plus the weather was just so good.

As for the sharp end of the race, Liam Hollohan repeated his win from last year in a dominating Raleigh 1-2-3-4. My chauffeur for the day John finished safely in the bunch after what we agreed was great preparation for next weekend’s first round of the National Mountain Bike Series.