My bike what I built 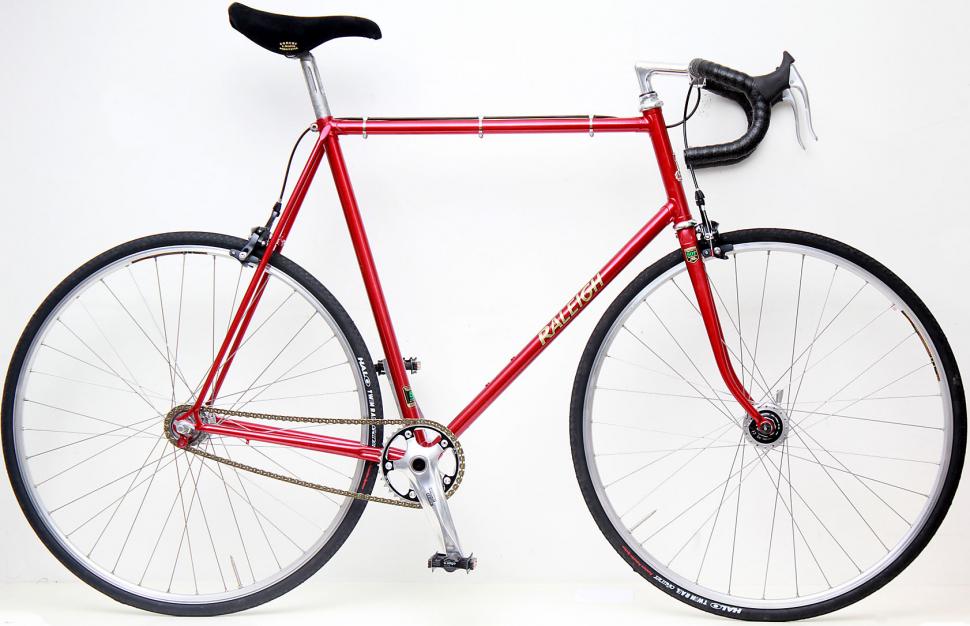 I've never done a restoration build before but when we pulled an old (1985?) Raleigh Sirocco out of the the bike shed at work, and my mind was full of visions of building a kickshift bike after the fun I'd had on the Marin Ignacio, the scene was set.

First off the frame and fork needed a bit of TLC so off they went to Reality Motorworks in Bristol for a brush down and powder coat in more or less the original colour. They made a fantastic job of the paintwork and also ground off the cable guides on the top tube to clean up the lines a bit. New decals from H LLoyd Cycles and a bit of work with the Dremel Multi to clean up the dropouts and it was ready for building.

Wheels were next, built from Mavic Open Sport rims. The rear's an S2 kickshift, the front a Shimano DN-H380 dynohub: the plan is to wire up some nice retro lights and I've got plenty of rear ones now... Halo's Twin Rail 24mm tyres complete the rolling stock.

The bars and seatpost are the originals for now, but they're both a bit battered so might well make way for something shinier (and wider, in the case of the bars) at a later date. The Concor saddle looks the part for sure, as to the skinny Dia Compe brake levers. The 105 callipers maybe not so much, but they were knocking about and they work well; I'll probably source some silver ones in time. Genetic make the nice classic stem, and the headset. Dia Compe, Sturmey and Genetic between them make a great range of kit for classic builds, all available from Ison Distribution.

The chainset is Sturmey Archer's rather splendid new FCSX unit, with outboard bearings and a 36T ring. The S2 is a direct drive/overdrive so the 36/17 gives a nice 56" climby gear and a 78" cruisy gear. That should be enough for most riding, eh? Clearly it needs clips and straps, so i'll be getting some of them.

First ride in this morning: the bike is nice and agile, not over-heavy (sub 24lb) and feels like new, all tight and springy. The narrow bars (39cm when I'd normally ride a 44) make it a little nervous at times, but other than that I reckon the setup works just fine. Happy with my new steed, it'll get a run out at the Endura Lionheart sportive if the sun shines, and then maybe the 200km Ball Buster if I'm feeling brave...