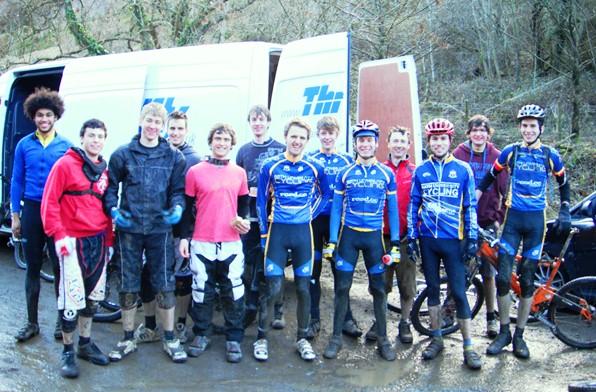 There are not many cycling clubs which can claim to be truly multi-disciplinary. A university cycling club can however, which is just one of the many reasons which make them so good. With 50 or so members each year Bath University - Road.cc has in its ranks: roadie tarts, XC whippets and not so whippets, DH fashion victims and fast ones too, fix gear/retro trendies, BMX bandits, plus a handful of elite athletes, two World Cup regulars and even some girls. Not bad for cycling club then. So here’s a post about some of our more muddy exploits.

With the British University mountain bike championships just a month away, something we win regularly and intend on doing so this time round, it was high time for some hours hammering a trail centre. This means only one thing: club trip.
Club trips are always interesting; take a bunch of stereotypically unorganised people (we are all students after all) and try and get them to organise transport, pick-ups, uplifts, drop-offs, bike collection detours, kit, food, bikes err working bikes, the list goes on. To cut a long and painful story short, 9:00am Sunday (only 30 minutes behind our killer schedule) we roll out of Bath with 18 members and a couple alumni to Cwmcarn. The DH and XC centre is only a short hour’s drive from Bath, over the Severn and into Wales.

The most amusing part of the story, at this stage, is that somehow we’d managed to convince someone to let us hire three, brand spanking new VW vehicles. Yes, that’s right, three inexperienced drivers rolling in around £70,000 of commercial vehicle. Oh dear. A few, nervous “SHITE! This is the first time I have been on a motorway” wobbles later we all arrive in the right place, not quite at the right time. A sunny Saturday means a full car park; cue the inventive grass verge “parking” for one of the formally clean VWs.

With seven DH guys on the uplift and thirteen XC riders all in various states of hangover we go about getting the aim of the day sorted and actually riding. It only takes a slight grasp of the law of averages to recognise that 20 people riding in Wales means several hours of people breaking themselves and their bikes. The latter being more serious; the NHS is free and the next student loan instalment is months away. Two mech hangers, 40 pairs of brake pads (thanks to the sandy trails) and a swollen ankle or two later, much has been accomplished. Tom “BIGDOG” Evans nailed the infamous quarry gap, a couple of Gilbert loving roadies lost their muddy virginity and most of the Freshers bonked themselves all the way to the “the bad place” – mission accomplished in my eyes. Importantly, everybody had fun/got the training we wanted, except for the mech hanger and ankle guys. Fortunately, Welsh rarebit and tea in the café never disappoints.

Heres a little vid from up top

Next week is a busy one for the club: the inaugural chaingang is pencilled in for Sunday and a confirmed onslaught in numbers at Upavon winter series on Saturday. We might even unveil our top secret Norwegian missile who is currently in hibernation after two weeks on a sunny island in the Big Ring……