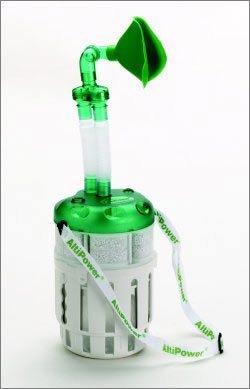 The Dwain Chambers story is a circus I know. Too many people getting hot under the collar, but love the fact that after Lord Coe called Chambers a cheat, his retort to the 2012 tsar was 'yeah?, well you had an affair with another woman, who is the cheat now' hmmmm, hmmm!!? Childish...

Anyway, it seems that Dwain is still working with the good Dr. Conte http://www.insidethegames.com/show-news.php?id=5190 (all clean now of course) with the use of a hypoxicator (pictured in case you were wondering what it was), and its the choice of many a pro cyclist.

"A typical hypoxic training session consists of one hour of alternating between breathing hypoxic air for five minutes and then ambient air for five minutes.It is widely accepted that increased blood cell count allows athletes to recover quicker from training and, therefore, withstand greater loads."

"The hypoxicator (pictured), which retails for around $1,300 (£936), is already popular among the world's top cycling teams and is perfectly legal."

Will we therefore see these taking the place of water bottles on the Cols? It'll be cheaper than drugs in the long run too, oh, but less tossed bottles for the tifosi maybe, which wont go down well. Then again it could be a nice little revenue stream for the industry, Garmin Chipotle team Hypoxicator anyone?

Whatever the case, in a sport still in rehab, the hypoxicator is a breath of fresh air.