Revving up for the RAB

London Revolution 2017
Completing the Dulux Trade London Revolution, 185 miles and sleeping in a tent, has gone a long way to putting my mind at rest about cycling the Deloitte Ride Across Britain in September

A week ago (maybe more, depending on when you’re reading this) I was nervously waiting the start of the 2017 Dulux Trade London Revolution, a two-day clockwise ride from Tottenham out to Windsor, where we’d camp overnight, before returning through the Chilterns and Hertfordshire back to the start.

Why I was quite so nervous I can’t explain. Partly that I just didn’t know what to expect, I suppose. I’ve ridden a couple of multi-day rides before – including London to Paris, which was quite high mileage for three of the four days, but staying in comfy hotels… This was a 100-miler (101.71 according to my Garmin), followed by 85 (86.28), sleeping in a tent in between…

Maybe it was the camping. I hadn’t even tried out my sleeping bag yet.

My husband tried to calm my nerves. “It’s not the Gobi desert, it’s leafy Surrey. With shops.” 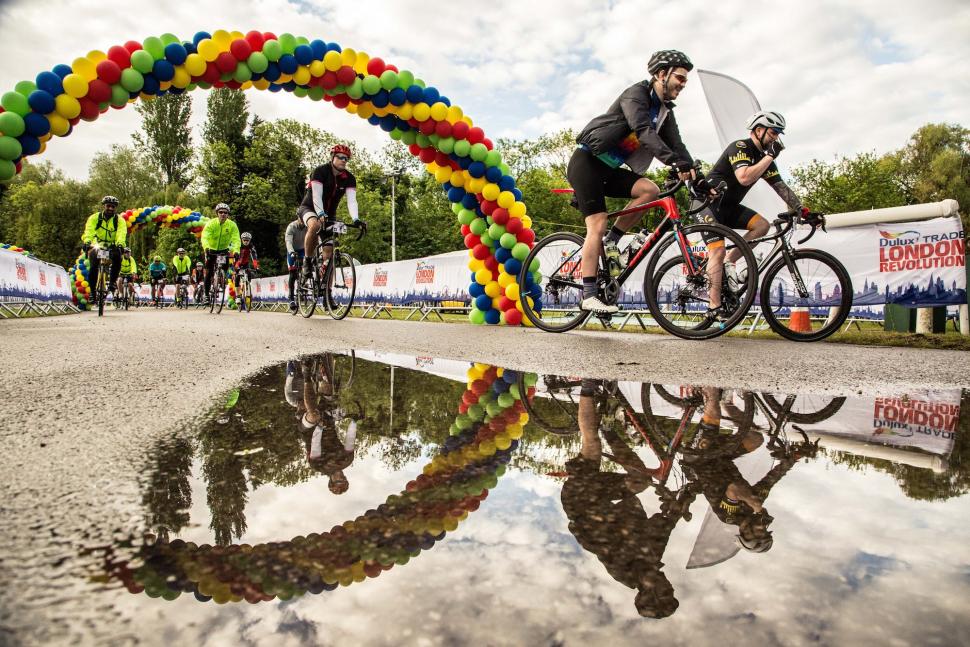 For many (identifying themselves with red ribbons in their helmets), the London Revolution is a practice run for the Deloitte Ride Across Britain in September, a little taste of what’s to come, only without the following seven days and nights of cycling and camping.

But even if you’re not riding the RAB, the London Revolution is a superbly organised event worth doing for its own sake. London commuters might be bored with cycling over Tower Bridge, but being a country bumpkin I’m still dumbstruck whenever I see it, and I’ve never ridden over it before! The route – devised by Andy Cook, who also sorts out the RAB route – takes you in quite a direct way to Tower Bridge, with plenty of (too much!) stop-start traffic-light action making you realise you’re not going to get exhausted on the bike any time soon. Exasperated, maybe…

From south of the Thames, we rode through beautiful Dulwich ‘village’, up to the Crystal Palace mast – actually getting the lungs pumping a bit – and eventually out into Kent/Surrey.

With family and friends living nearby, it’s not an area completely new to me, but I’ve never cycled around it. A few idiot car drivers aside, it’s a lovely place to be on a bike – surprisingly so when you consider how close you are to the capital. Titsey Hill I had heard of – and luckily we were being sent down it not up (though not for one unfortunate woman who crashed badly). Some years the Rev runs anti-clockwise, I was told by one passing cyclist, and I’m not sure I’d fancy riding up it…

Arriving at the first feed station just ahead of the 11.30am cut-off time meant I could breathe a sigh of relief. Instructions ahead of the ride to ‘make yourself familiar with the timings of the pit stops’ had made me worry about a possible rookie mistake of opting for the latest start time, so as to have the longest possible lie-in, without thinking about how this would affect riding speed…

Now I could relax. The sun shone, the food was plentiful, the atmosphere very convivial. And the middle leg that followed was pretty easygoing – or easygoing and pretty – with only one hill registering on the top tube sticker list. The couple of climbs that followed the second feed station were sharp but short, with a particularly nasty left-hander on Staple Lane, but the loveliest downhill followed as just reward: the views opened up to a distant horizon, beyond what could possibly have been Guildford… And finally, after 101 miles, we reached Windsor where cheers and applause from the kind people lining the finishing straight welcomed us to a lovely festival atmosphere. Music played, food was served, beer flowed and the sun continued to shine (though we missed the guest appearance from Lewis, the Dulux dog). If this is a taste of the RAB – bring it on! At last. My first multi-day ride of the year ‘proper’. (Not sure the 12-mile daily commute counts.)

I was really looking forward to cycling in the Chilterns – okay, there were more hills en route than day one, but there were also going to be red kites! Unfortunately, there were also some tricky, gritty, steep descents, one of which did for Simon (possibly not helped by his disc braking method, which he has since been addressing).

Before that came beautiful Marlow and its lovely suspension bridge over the Thames (maybe when I win the lottery I’ll go for Marlow rather than Shere, my choice of the day before…). A couple of gritty climbs carried us up before the descent where Simon came a cropper, and his slightly mangled chain and bloodied knee and elbow meant we then walked up Bledlow Ridge, before the excellent mechanics station at the feedstop, and in particular Alan and Christian (our heroes!), got everything working again, and the medics patched up Simon’s knee.

Just in time for Kop Hill… If KoM means King of the Mountains, perhaps KoP means King of Pain. Steeeeep. And loooooong. But a lovely view at the top. Followed by more chocolate box villages and countryside… Which is how it continued really, up until the second feed station.

Chapeau to Andy Cook for getting us back to Tottenham without it really feeling too urban. Riding next to – was it the M25? the M1? A1M? – was noisy but felt safe(ish) and some little lanes made you forget you were closing in on London again.

Was it a tailwind that edged the speed up to over 20mph? Or just our muscles building up as we rode…? Hah!

And before long it was all over. We crossed the finish line and were back where we’d started, in that weird headspace of remembering how we’d been here just the morning before, all nervous and anxious. An excellent weekend of riding, brilliantly organised, and great camaraderie on the route. I've been feeling nervous about doing the RAB, but this has put my mind at rest on so many counts. Cycling is such an inclusive sport; it’s not a race, no one cares if you have to get off and walk some hills, or you want to go slow and take in the view, or stop for an espresso at a handily parked van, or to get your head down and whizz past a slower group.

It’s just a great way to cover miles, at your own pace, see the country, and enjoy your own ability to get places. Roll on September! • Next year’s Dulux Trade London Revolution takes place on 12th and 13th May 2018 and discounted early-bird entries are available from midday Sunday 21st May, at www.london-revolution.com