Riding to Scotland
With a 2500km race just weeks away, it seems like a good time to get the training in!

With the Transatlantic Way race fast approaching I thought it wise to test the legs, body, and bike out before I pedal off.

A couple of DM’s on twitter and I’d managed to round up Tim Pulleyn and Daniel Easton for a trip to Scotland. Neither were sure what lay ahead, but both were willing, and that’s enough!

The ride was 4 years to the day of me setting off for a 10-day Lejogle, so the idea of riding to Scotland from Nottingham seemed fitting, and sufficiently challenging. With the forecast looking foreboding it seemed like it would be ideal for Ireland! 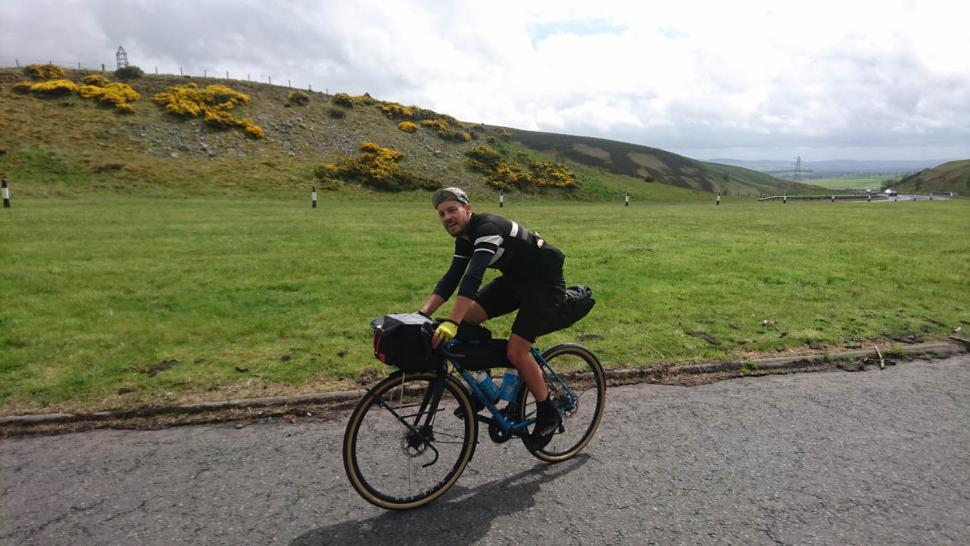 I was using the ride to test some new kit and ideas, and had the new Wahoo Fitness Elemnt GPS computer with me for logging and navigation purposes, whilst for sleeping I went down the tent route with the Vaude Lizard gul (at 700 grams it’s spectacularly light!).

Pictures have come from a Fuji Film X70 camera - it's talents are better than mine!

We met as a group in Leeds, with the sun shining and the afternoon ahead of us. After filling up on jam sandwiches and distributing some treats from Pedalbites, we headed out. Within 1 mile we were on our first detour and slogging up a 12 degree slope out past Headingly. The roads soon thinned down as we rolled into Harrogate and the sun stayed out, so far so good it seemed. A wrong exit at a roundabout and the subsequent 180 degree turn showed that we weren’t as strong as we first thought, instead we had a cracking tailwind pushing us along. As the evening progressed we had our first cafe stop, managing to get the last sausage butties from the kitchen at the very welcoming 68 Cafe. Skirting between the Dales and the Moors we managed to avoid anything massive, but our evening was spent going up and down, with substantial rollers greeting us every few minutes. I was clearly the slowest ascender on pretty much every climb (pay them no mind, thought I), as I did my best to remain lactic-free – not easy I’ll say when you are running a semi-compact and an 11-25! This was to pay dividends over the coming days as this pacing ensured I stayed relatively fresh. A few years of big riding has allowed me to get a feel for what is sustainable, this certainly helped me out during our ride together as the other two were perhaps not paying attention to their bodies quite as much.

As the night came we were getting closer to Scotland, arriving as we did just 10 minutes before the last Co-op in England shut for the night. A restock for sustenance and some banter with the locals (Jedburgh is pronounced like Edinburgh, not Pittsburg!) and we were off again. 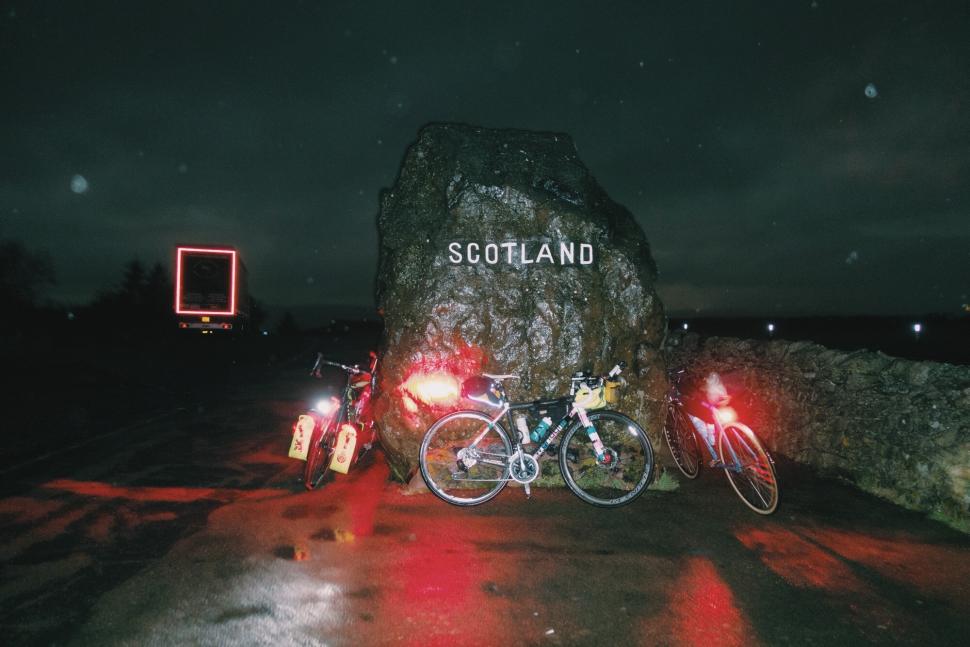 To labour the point that there are a heck of a lot of hills on the way up to Scotland, the road kept on going up to reach the border, and the weather worsened – this was almost certainly the Scot’s taking revenge for Braveheart! A quick photo stop and then the descent and a search for somewhere flat and safe for sleeping.

We kipped on the edge of a playing field, perfect, well almost perfect – perfect would have been shining our torches to the left and seeing the pavilion 50 metres away! I think we pitched up around 3am, dark for sure, but getting close to sunrise! 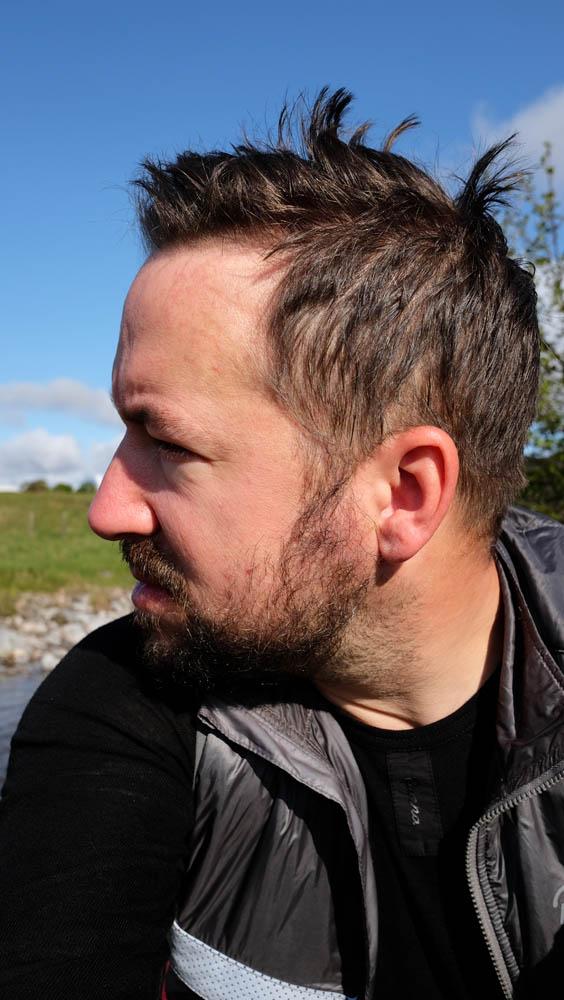 A cold night ensued (my night kit was a thermal base layer and tights, and sleeping inside a silk sleeping bag liner) but we were dry so that was about all we cared for!

The next morning took us into a very canny book shop / cafe for scones and some liquid warmth, and like Tolkien’s Fellowship of the Ring, our party split. Tim had a girlfriend that had decided to come north and he was concerned that the previous day had taken too much out of him to carry on properly. Tim split off, whilst Dan and myself carried on towards Mordor.

Between us we rolled along keeping an average of 15-16mph up, but sadly, like Tim, Dan decided that the previous day’s pace had taken too much out of him, so Edinburgh was going to be his bail-out point. Massive props to Dan though, Friday had been his furthest ever ride, popping out over 300km in the day! 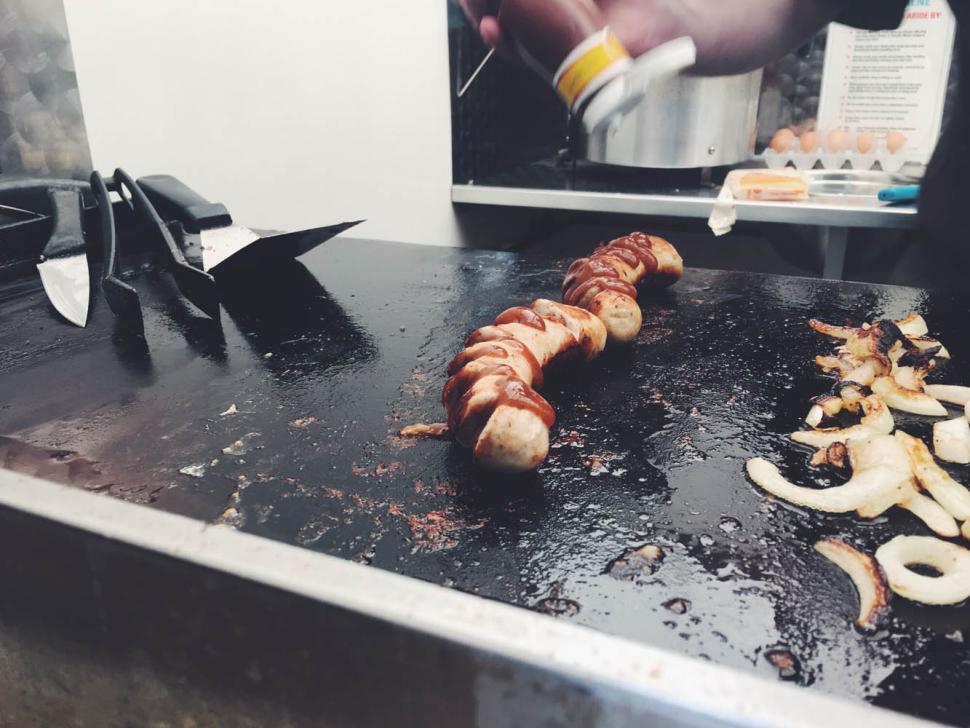 A mix of sun and heavy rain followed us to Edinburgh Waverley and Dan made his train with a massive 5 minutes to spare.

And then there was one!

Out to the Forth Bridge – always spectacular, and on towards Perth. More rain. Battered Sausage, no battered haggis! Riding further north and the scenery is just spectacular, with a clear night in the Cairngorms for company it never truly got dark. But it did get cold, so this night I put the silk liner inside a cotton liner – and still ended up shivering myself to sleep! The next day rose bright and glorious, but my activity levels were down a little, I wasn’t overly keen on beasting myself alone. Probably quite lucky because a few hours into riding I heard a strange thwapping sound, unsure of what it was I looked down to see my inner tube bulging out of a ripped side-wall!

I stopped quickly, and within moments a loud BANG erupted as the tube exploded! Despite my best efforts to repair the side wall it wasn’t happening, and there were no bikes shops nearby on a sunday afternoon! 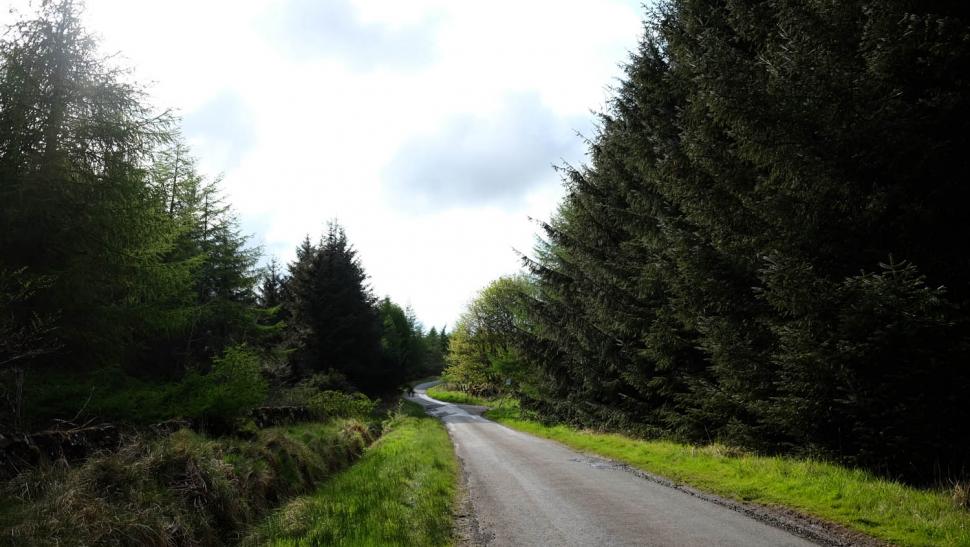 Surveilling the area and my options, I decided to pitch my tent and just enjoy the afternoon by the river, and deal with getting the tyre fixed tomorrow. This was a good opportunity to test out Rapha’s quick-drying claims for their Brevet bib-shorts, washing them in the river and hanging them from a tree to dry. Despite it raining another 3 times during the evening and night by the next morning they were dry and ready for action again (ruddy good job Rapha folk!). 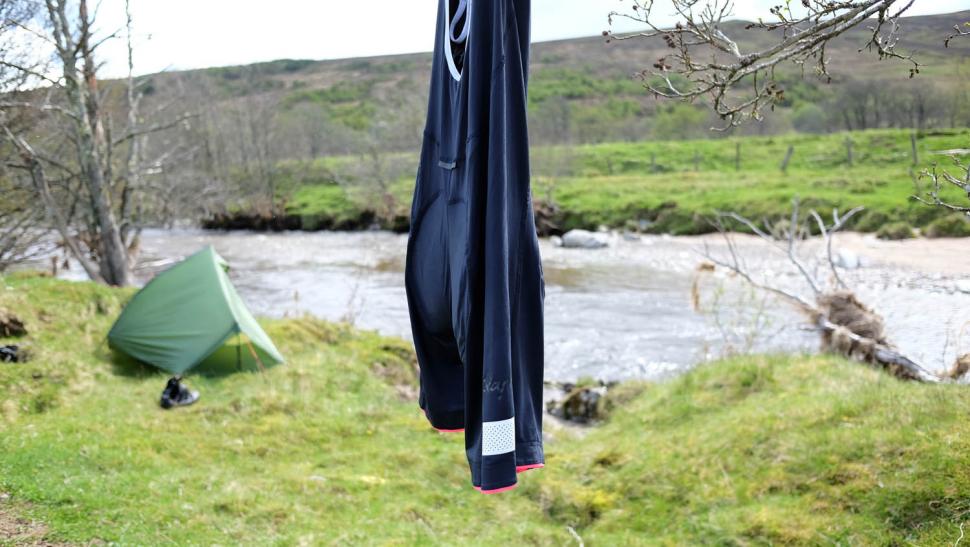 The morning brought sunshine and smiles, until the recollection that I had to walk 8 miles to the nearest train station/bike shop. After packing up camp I headed out to the A9 to crack on. I figured I might as well at least attempt to hitch-hike, nothing ventured nothing gained etc. 5 cars later ad I’m happily ensconced inside an estate car with the bike in the back. A drive to Pitlochry and the Escape Route Bike Shop and they cheerfully got the rubber replaced! 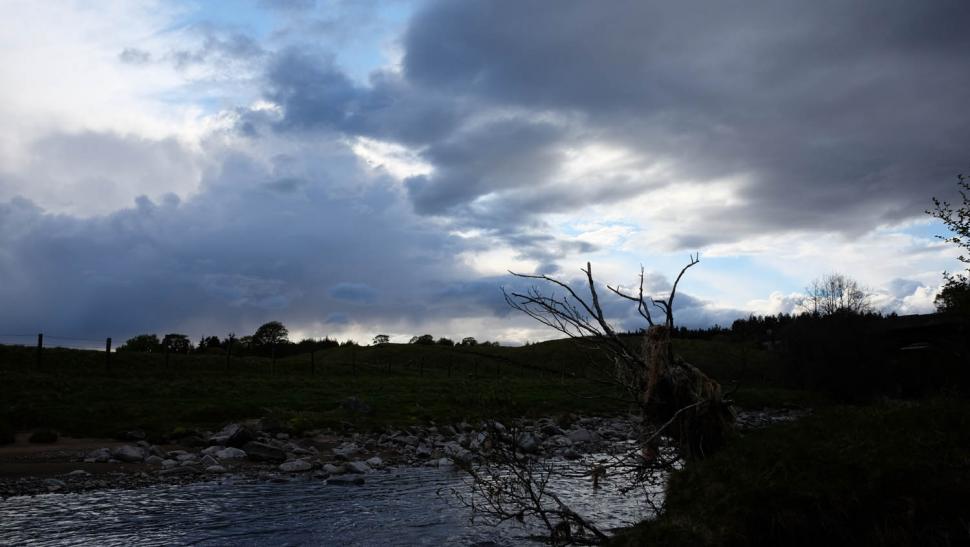 By this time the train is my only option so brain was engaged and with some bin-liners and parcel tape, I’ve got a bike-shaped parcel to get me past the train conductors. Turns out it didn’t fool them, but it did get on, and stay on, the train! 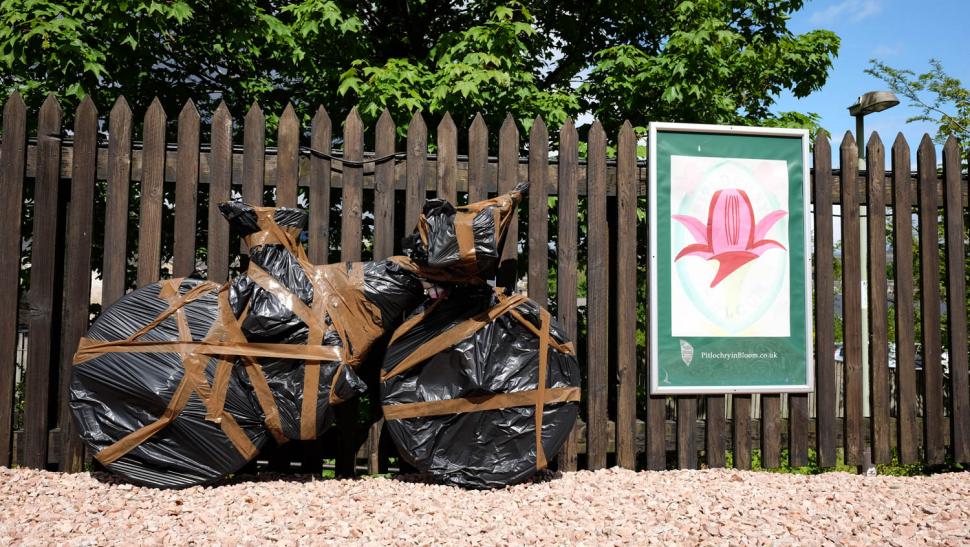 Thanks to some kindly guards and some human understanding I made my way to the final destination and my final ride to get home.

Final total was around 650km, not nearly as many as hoped, but still a good workout.

Biggest lessons:
The Wahoo Elemnt is pretty awesome – lots of data if/when you want it, but also a really useful set of blue and yellow LEDs that are indicating if you are above or below your average speed. This wa really useful as it meant I didn’t need to use additional battery to know if I was on track or not – I simply had to keep the LEDs blue!
I definitely need to sort out the sleeping, time for a new sleeping bag as the last one was bought in 1990

Rapha Brevet shorts are super quick drying, and the wind block jersey does as it should – worth bearing in mind that it’s relatively easy to overheat with it unless you open it up.
Pedal bites make some tasty treats!