Loads of you have been telling us about your bike(s) in our Kinesis Tripster Schwag Grab, which has prompted me to extract the digit and tell you about the latest addition to the road.cc team, our new company bike, well frame, it's a Cotic Roadrat and we're going to be using it to test kit and generally have fun… well I am, everyone else in the road.cc office can just back off!**

Like the Kinesis Tripster the Roadrat, is a versatile bit of kit we tested it last year in its drop bar, disc braked, singlespeed guise. Gettingt it as a frameset turns the versatility knob up to 11. You can run drops or flat bars, mini V brakes, Cantis or discs, 26in or 700c wheels, it's got horizontal dropouts for running as a fixed or singlespeed with an adapter so you can stick a derailleur on it, the only thing you can't do, to my regret, is fit calliper brakes, then it would be perfect in its all-roundness. 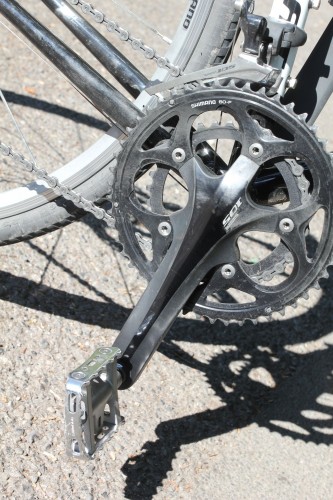 So heres my first build, I'm running it with the new Shimano 105 drivetrain, 10spd at the back with a 50-34 compact chainset. Despite the hills around here i've usually gone the 53-39 route, I was running the previous incarnation of 105 on the Ridgeback with a standard 53-39 chainset. My ideal would probably still be a triple though summat like a 53-42-32 or possibly a 52-42-30, you can get them so further down the line I might give it a try.

Pedals were the new 105 black jobs, but as you can see from the pics I've already swapped them for some more practical round town Shimano M324s - flat on one side, clipless on the other and poss my favourite pedal.

Rest of the kit is stuff we had lying around the office (the pedals were lying around my house), well except the Shimano RS 20 wheels which match up nicely with the 105 componentry. Oh, yes, the levers are 105 too. Bars are Easton EA70s, I like 'em and I'm not normally a fan of anatomic bends, but the ones on the EA70s just seems to fit. I've gone for a short 90mm Oval stem, a Bontrager saddle, on top of the old alloy seatpost off my Ridgeback, and some Halo Twin Rail tyres. Current all up weight is 10.6Kg, I reckon I can lop off a kilo easily without being silly – those Twin Rails fear nothing the road can throw at them, but even their biggest fans couldn't describe them as light.

* But I'll be riding it, just so as we're all clear about that

**Not including Dave, he's the man with the spanners… and besides it's several sizes too small for him.

1
Near Miss of the Day 473: Nottinghamshire Police now treating close passes as ‘victimless crime’
2
Tadej Pogacar stuck (most of) his Tour de France rides on Strava
3
Near Miss of the Day 474: "It's more fun to drive straight at a cyclist"
4
Road World Championships: Julian Alaphilippe wins the rainbow jersey (+ highlights and reaction)
5
Two Hackney town centres could close to through-traffic in face of violent hostility from small minority
6
Campagnolo turns it up to 13 with Ekar gravel groupset also featuring tiny 9T cog
7
Near Miss of the Day 472: Illegal overtakes at pedestrian crossings
8
Anna van der Breggen wins dramatic worlds time trial as Chloe Dygert crashes out while leading (+ video)