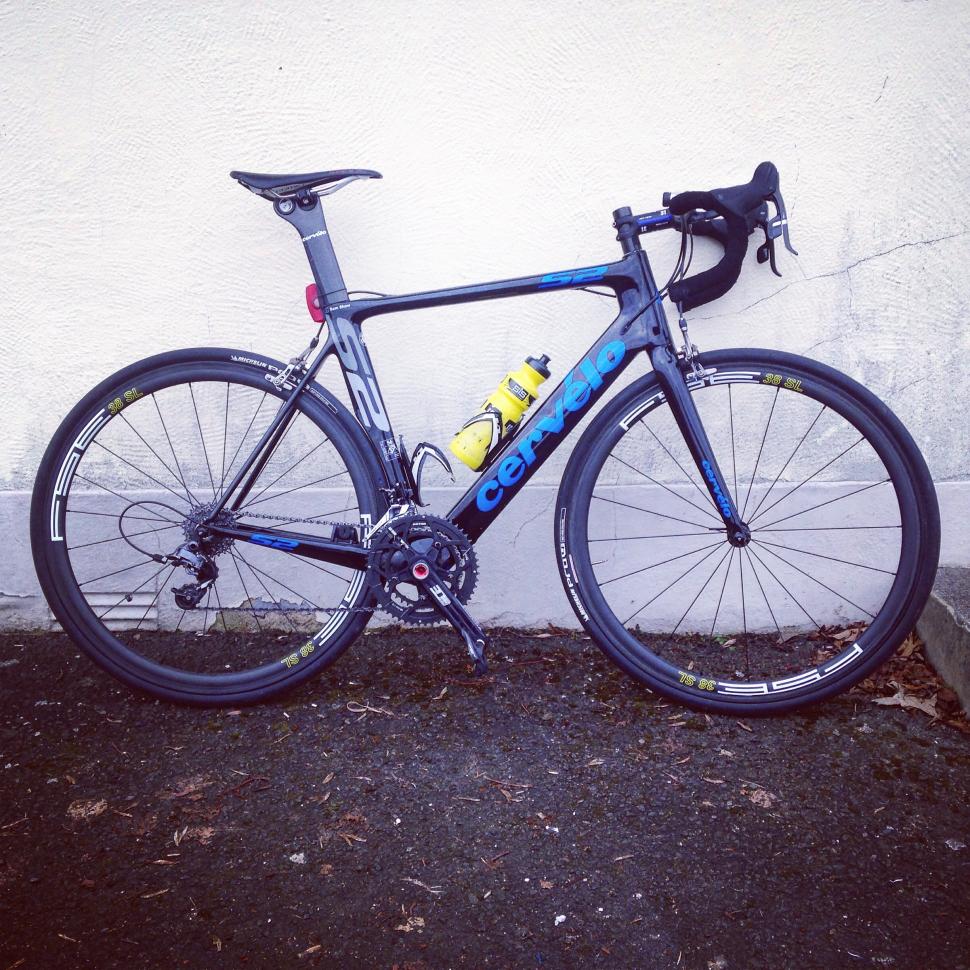 I realise it's been quite a while since I produced my initial assessment and the follow-up blog on the Far Sports wheels; a couple of you have got in touch via Twitter in the interim and there's been some back and forth, but it seems appropriate to sum up my thoughts on these wheels.

The first item of news is that I'm now on my second set of these wheels. After the first year of using them, I sold the first set to a clubmate and got another set for 2015. The first set stayed true for the duration of time that I used them, however there was a problem with the rear rim. I'm unsure as to how it happened (that old chestnut, eh) but it looked like it had struck something (possibly a stone) and the edge of the rim deformed slightly. Both I and my clubmate rode it like that for a period of time and there was no further degradation.

A new rim was sourced from Far Sports, though I did have to wait a while whilst they manufactured one with a 28h drilling. Bear this in mind if going non-standard – the standard drillings are 20/24. Once the new rim arrived, it was found that a thread welding compound (Loctite or similar) had been used to secure the spokes and as such the aluminium nipples were not compliant when attempts were made to remove them. This meant new spokes and nipples had to be used to rebuild the wheel, which isn't a bad thing when you speak to most wheel-builders – many advocate using new components when rebuilding. It did, however add to the cost of the rebuild.

The rebuilt wheel is still going strong, hauling round the roads of Scotland and being raced without further issue. My clubmate has been using Wiggle blue carbon brake pads with decent (for carbon rims) results. It's also worth adding that I purchased an 11 speed free hub directly from Far Sports to convert them to 11 speed, the cost for the freehub was $60, around £39 shipped from China with full tracking, it arrived within 5 days.

So after punting on the original set of wheels, I got a set of 23mm wide 38SL wheels, which sport a different logo and roll on Far Sports own FSE hubs. As with all graphics, it's a matter of taste and although an improvement on the “Far Sports” logo that graced my original wheelset, the FSE graphics would benefit from a touch more input to up their appeal when viewed against top-brand logos. During the purchasing phase, I had an email exchange with Far Sports and they assured me that the standard 20/24 spoke count (against the previous wheelset's 24/28) would be fine for my weight. It's worth stating this prior to order to make sure you're getting a wheelset that is right for your weight and riding style. The 38SL wheels arrived well packaged, with skewers and Shimano-compatible brake pads but no rim tape. As before, I bought alternative pads of the BBB variety due to the experience I had with the Far Sports ceramic pads. Having gone through a set of the BBB pads in 2015, I've been using the Far Sports ceramic pads and they're a great improvement on those I got in 2014, so probably not worth buying elsewhere until required. Braking on the new wheels is of the same standard as the previous set, it takes a bit of getting used to going from aluminium to carbon, but once you've gone a mile or so you readjust – similar to driving a manual/automatic or right/left hand drive car. Weight is similar to the 24/28h wheels at 1,350g, which would leave me to believe that the rim is beefier as the hub and spoke weights are similar. This is unconfirmed though as I've not taken the wheels apart and weighed every component.

The 23mm width rim has an internal width of 16mm, which gives a 25mm tyre a large volume to fill. A club-mate's asked if I was running 28mm tyres as he was sat comparing his own 25mm/carbon rim combo to mine and there's a significant visual difference. This is a good thing on UK roads where we don't have the smoothest asphalt. It may be a concern on frames with tighter clearances, though most modern racing frames are moving towards allowing 25mm and even 28mm tyres as trends follow the preferences of the current crop of pro's.

Far Sports were keen to let me know about their own brand hubs, and stated that they were an improvement on the Bitex hub that were on the previous wheelset. They don't look particularly fancy, and are fairly straight forward with two cartridge bearings at the front and four in the rear: two in the hub, two in the freehub. The freehub has 3 pawls in it that are actuated by leaf springs. I recently had to strip the hub down to replace the freehub bearings and the internals were free from evidence of water ingress so the failure of the EZO bearings is slightly confusing. The bearing that failed is the one right in the guts of the freehub so it was quite frustrating to find that out after stripping the thing down to its raw elements. I did find out that the bearing size is a 6802RU and replacements were sourced from my local bike shop, so there is a benefit to the hubs being simple – no special tools were required to take them apart. Rim wear rates have been low and it would appear that there's plenty of milage left in the wheels for a couple more seasons, though the longevity of the rim structure poses more of a question given the damage sustained to the original rear. I had to true up the rear of the 38SL's after a month or two and it didn't appear to have thread-locked nipples, so the original rear may just have been a one off.

Riding carbon clinchers the last couple of years has been pleasurable. At first I thought I'd be constantly fretting that they would explode or delaminate, but my riding is around Scotland and there aren't many descents that require heavy prolonged braking like in the mountains of Europe. Ambient temperatures don't reach such levels that heat dissipation would be much of an issue. Having said that, I wouldn't take these abroad to ride on big mountains, instead I'd opt for an aluminium clincher. This would be my approach to any carbon rim, of Chinese manufacture or otherwise.

In use, I've found the low weight is fantastic and really makes a difference when it comes to going uphill for a non-climby chap such as myself,, and that's coming from relatively light 1,450g alu wheels. Where they do feel much faster is on chaingangs and fast club rides, they hold speed really well and they respond very well to changes in power output at the sprint for the 30's. Changing direction is done with an encouraging sure-footedness, which really gives confidence when leaning the bike over.

The attitude towards direct-sales Chinese manufacture seems to be changing in some quarters as I've (un-scientifically) observed a number of local riders running Chinese made carbon clinchers. One UK race team, Pro Vision have actually partnered with Far Sports and list them on their Facebook page https://www.facebook.com/provisionraceteam/ as providing their “Team Issue” wheels.

As comparison, I tried a set of Easton EC70 SL wheels, but they had a slightly dead feeling when they were on the bike, something which is reported when scanning through reviews for wheelsets of a similar type (alu rim with carbon fairing). Does the holy trio of deep section, light weight and decent braking exist in a wheelset? Probably, but not available at the lower end of the budget range. Until then, I'll be continuing with these wheels with a set of aluminium clinchers for mountainous routes when I eventually make it on a holiday abroad.