We asked: what would you put on a helmet? And you delivered.

From light sabres to on-board refreshments, here are some of the best suggestions

So, yesterday we asked you to suggest what you would like to see on a helmet, following the emergence of the Livall Bling, the helmet with everything thrown at it.

From the sensible to the surreal, you came back with some pretty good suggestions.

Of course, being cyclists, the provision of tea and cake was a recurring theme

On Facebook Andrew Poole suggested a teasmaid, while Chris Gerhard on Twitter went for an entire oven.

@roadcc an oven, for cooking cakes so you never run out of cakes.

York Cycle Chic suggested a Flapjack Shoot. We're not sure what that is, but if it involves flapjack, it's OK with us

We had the more practical solutions

On Facebook Sean Martin suggested a HUD so Froomey doesn't have to stare so hard at his stem. Very thoughtful, Sean.

This one only works if you're a cop, but thanks Police Constable Matthew Baker: 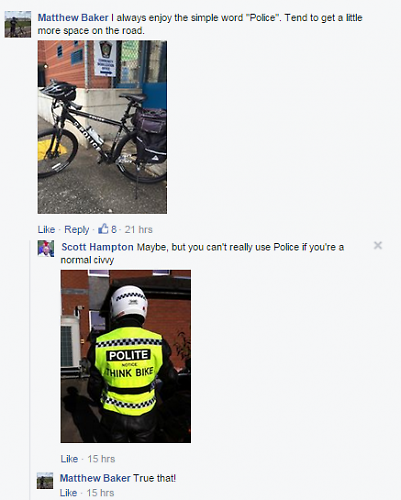 Socks were all that Ned Boulting and Stop Killing Cyclists' Nicola Branch wanted.

@roadcc washed socks, so that they can dry in the wind...

The sci-fi references were also strong with this one:

Headwind neutraliser, anyone? (Thanks Dafydd Pritchard for that)

Then there were suggestions of the violent kind

A heat-seeking smack in the mouth launcher takes rather an angry tone, and is potentially problematic in application, but thanks Graham L Simmons

While Richard Frost, rather enigmatically, proposed a rocket launcher, size 9 (we hope you've been doing your ab crunches to stabilise that one when it goes off, Frost)

@roadcc force field generator to protect me from cars.

And no list would be complete without a Star Wars reference

Though, again, some were slightly disproportionate

But our all-time favourite had to be the sharks with frickin' laser beams, as suggested by Christian Dransfield on Facebook

Because when isn't a shark appropriate?