Livall Bling: the helmet with how many functions? Helmets that only protect your head are so last week. Or that's the conclusion Livall apparently drew, shortly before they embarked on a mission to add, well, just about everything, to one.

"How about flashing indicator lights, too?"

"That's been done before".

"With a gaming-style remote control console, attached to the handlebars?"

"How about making phone calls while cycling?" They might have said, swatting away one of their previous inventions, a drone built in the shape of a vampire bat that has decided to practice its low fly-bys in their small shared office.

Yes, phone calls using a microphone with windbreaker technology, so even when you're battling a gale you can talk in length about the latest cycling gadget you've just bought and how its inbuilt Bluetooth speaker allows you to hear the stifled yawns of whoever is on the other end.

That Bluetooth speaker also acts as a walkie talkie, so you can talk to other riders in a group about it, should you mysteriously get cut off. 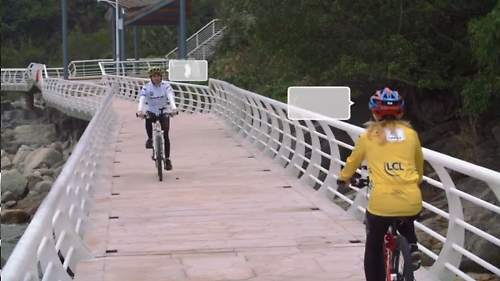 Then somebody brought in some cupcakes, and shit got inventive.

"How about it reads your texts out?", as last year's ambulant toaster waddled over and attempted to swallow someone's shoe, with his foot still inside.

"Out loud." Kicking the toaster back into the kitchenette.

So that while you're cycling to work, or on your Sunday morning ride, you can receive instant notification of the latest instalment of your friend's online dating saga, recounted in a dispassionate robot voice (we hope). And so can the person next to you, one might imagine*. 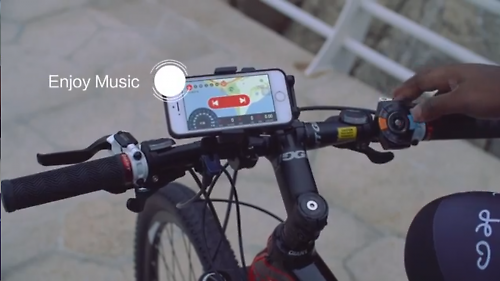 As well as that elevator music you insist on playing on your commutes because, of course, you can use the technology to listen to your favourite choons. And so can the person next to you, one might imagine.

These guys didn't stop there, of course.

"What next. Emergency beacon?"

Oh yes, they did.

The three-axis G-sensor can detect unusual gravity acceleration if you fall off, so that, rather than being able to jump back on the bike as nonchalantly as possible, it emits a red flashing light, while that Judas helmet sends an SOS alert to your chosen emergency contacts.

Which will no doubt prove a laugh when you meet them down the pub later.

Of course it's not the first all-singing helmet we've encountered, the previous including, of course, windscreen wipers and a giant number plate.

Perhaps the aim of products like this are to make cyclists look even more like crazy overgrown kids than much of society still believes us to be. If so, then we tip our helmet to you, Livall. Perhaps they hope to distract us from that feeling one sometimes gets that no-one really wants us on the roads.

Slightly worrying, we thought, is the guy in the marketing material who appears to be clutching his helmet in a motion of sheer information overload.

Why stop there, though?

What would you put on a helmet? Head massager? Umbrella? Tea and coffee making facilities? Please tell us in the comments section, below. The best suggestion wins socks.

The Livall Bling is currently being crowd funded on Indiegogo, and has raised a whopping $103,118 in just eight days, 516% of its funding target. You've still got over a month to go to add both suggestions** and more money, to help the thing be mass produced.

*It might be advisable to limit your mum texting to tell you your washing's ready/your doctor texting to say the cream for that embarrassing rash is now available for collection/sexting to strict non-cycling hours of the day. Or it might prove a fun game among your friends to send surreal/inappropriate messages to you when they know you're out on the bike.

** We can't guarantee your suggestions will be taken on board by Livall, but we hope they will provide good entertainment for us.