But local council declines to back design
by John Stevenson

A Sydney, Australia designer has jumped on board the cyclist licensing bandwagon in New South Wales with a design for a helmet that incorporates a machine-readable number plate, and has tried to get a Sydney suburban council to back the idea.

The council was asked to support the concept and write to NSW roads minister Duncan Gay requesting a meeting to introduce it to the state government.

As well as a number plate, Mr King's Smart Hat incorporates brake lights, indicators, a visor, a slot for your smartphone, a display and wipers to clear the visor when it rains.

According to Jessica Rapana of the Mosman Daily, Mr King told the meeting: “This is a concept for better road safety. It is not a product or a business, it is a concept design. There are not many features on the current helmets that makes them safe.”

Mr King told road.cc that he's just trying to improve cyclist safety. Smart Hat, he said, is for responsible cycliss whowant to be part of the road user community.

He has at least one Mosman councillor backing him. Councillor Simon Menzies said the Smart Hat would provide a solution for commuter cyclists to be registered and able to showcase their registration number.

“People who use it as a mode of transport should be registered and insured,” Cllr Menzies told the Mosman Daily.

“Every other road user pays for registration and it should not be any different.”

The New South Wales state government is considering licensing for cyclists, and Minister Gay has said he is considering banning cyclists from certain roads in Sydney.

Cllr Menzies said he believed relations between drivers and riders would be better if drivers thought riders could be held accountable for their actions.

“It annoys drivers that cyclists can get away with breaking road rules,” he said.

The council did not pass the motion supporting the Smart Hat, but instead passed an amended motion supporting "concepts which aim to improve safety for cyclists and reduce cycle collisions between vehicles and pedestrians" and encouraging Mr King to "present his Smart Hat concept to the NSW Stay Safe Committee". 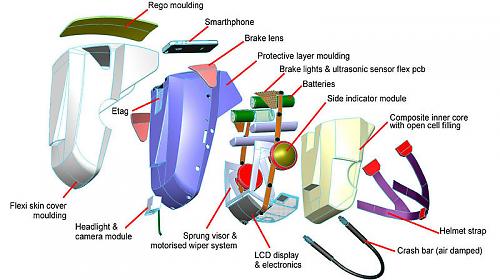 As you can see from the above diagram, the Smart Hat has just about every bell and whistle you could possibly imagine. And a few you probably couldn't.

Here's how it all fits together: 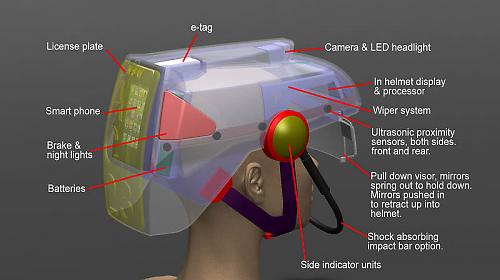 The lights, wiper motors, sensors and other electronics will be powered by batteries built into the helmet.

Mr King couldn't say how much he expects the Smart Hat to weigh or cost, though he thought the market would bear a price of about AU$200 or £100.

On his website, Mr King says: "Smart Hat is a concept design to greatly increase rider safety, while also addressing some of the more inflammatory issues between cyclists, pedestrians and road users."

Smart Hat's tagline is 'for Responsible Cyclists'. Mr King explains: "Without accountability, there is no respononsibility. Smart Hat allows a license sign to be attached, identifying the rider to other road users, pedestrians & authorities.  Registation is a method for riders to show their riding skills, insure themselves & third parties and welcomed as a responsible user of road & pedestrian environments."