One of four rides done, but only 13% of the way there. Saturday's fun was the Cheltenham New Flyer Audax, a 200km big lap of Swindon starting and finishing in Andoversford and taking in plenty of lovely Cotswold countryside. And cakes.

I'm trying to do a Super Randonneur series this year and a 200km is the lowest rung on that particular ladder. I have 300, 400 and 600km rides still to do. But at least I'm part of the way there. It was a cold day that started with unresponsive fingers and a chap misjudging a downhill turn and ending up in a ditch at about 30mph. Fair play to him though, he dug himself out of it and finished the ride muddied but determined. There were a couple of steep hills to sting the legs the first section to cake stop number one, but really it's a predominantly flat ride and we had a tailwind for the first half that didn't really make itself felt as a full-on headwind until the last 50km. Lots of lovely roads, with very little on them, winding through Cotswold villages and blasting over open hilltops and rumbling over expansive Wiltshire plains. 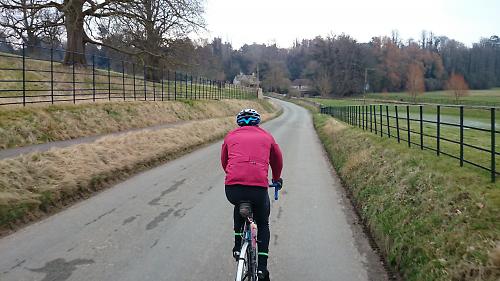 Cruising speed, mostly, with plenty of breath left for chat. Every now and then the ticking of gears and rolling of rubber would work its hypnosis and we'd fall silent, clocking off the kilometres. Back beyond Tetbury the wind began to bite at tired muscles and minds, with a 5km false flat into a block headwind the definite low point. The sunset was nice, although my stem was more my focus. There were three of us, for the most part. Thanks to Nick for subbing me my lunch money (I still haven't found that £20 note) and Tori for the excellent company. Thanks to the Stourbridge train for towing us to the first cake stop, although they did manage to tow us a kilometre past before we realised we'd missed it. Thanks to the crews and cake-mongers at Andoversford, Fernham, Burbage and Lacock and the nice people at The Ormond in Tetbury for espressos and brownies when they were most needed. Thanks especially to Stephen Poulton, the organiser, for a great event. Six quid well spent. Well, six quid and another twenty on cake, most likely. I was meant to be doing the Heart of England 300km next but that clashes with road.cc Italy Week now so instead I'll probably be DIY-ing the 300 with a ride back to my parents' house in Suffolk. There had better be a tailwind.