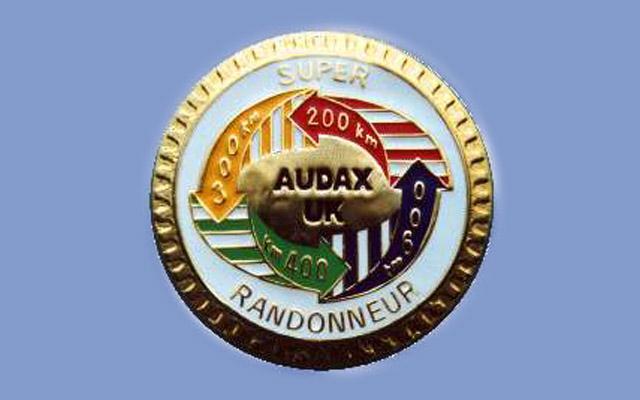 SR Badge (from Audax UK website)
1,500km in four rides. how hard can that be?

So, in a fit of hubris directly related to the fact that I've been training and lost a bunch of weight, I've decided to have a pop at a Super Randonneur series next year.

This is Audax we're talking about here. If you're not aware of, or only dimly aware of, Audax, it's basically distance riding. It's much more grass roots than sportives and has been around a lot longer. It historically attracts people who have bikes with mudguards, and Carradice saddlebags. And beards. People like me, then. All you have to do is get round above a minimum speed and get your card stamped along the way to prove you haven't cheated. There's no route signs, you find your own way. Traditionally it's been the domain of the gnarly touring types, but you'll see more and more racers doing the shorter (and, increasingly, longer) rides. They're a few quid, rather than £50-odd for a big sportive. And they have better cakes. It used to be a mudguards-only domain, but many rides don't require them now.

So, anyway. It'll be new ground for me. I've done a 300km, which I found mostly very pleasant, and a 400km, which didn't go entirely to plan. But never a 600km. Although that's just two 300km rides with a bit of a nap in between, right? How hard can it even be? I'm glossing over the fact that the 600km I've entered has 1.073 Everests of climbing in it.

14th March: The Cheltenham New Flyer 200km
11th April: The Heart of England 300km
2nd May: The Brevet Cymru 400km (I have unfinished business with that one)
13th June: Mr. Pickwick goes in search of dragons and legends 600km

Wish me luck. And if you're doing one of them, come say hi.