Odd Down Cat 4s: a doomed bid for glory 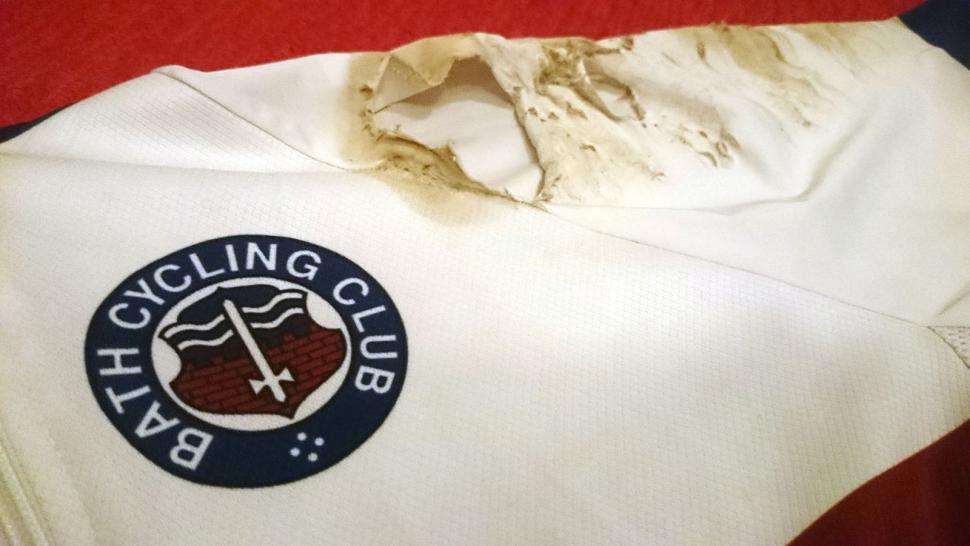 That'll buff out
I love it when a plan comes together. This one didn't, quite.

One second you’re off the front with a slender gap with a Cat 3 racing licence in your sights, the next you’re looking up at the sky with holes in your clothes and skin. That’s bike racing I suppose. It was all going so well.

Saturday, and Odd Down, and I had a plan. The plan was to stick in until the last lap and then give it death down the back straight and hope I could gap the field and stay out until the end. Or if not stay out, give myself a shot at some decent points. And on a windy, messy day in the Cat 4s I managed to stay out of trouble and put myself right where I wanted to be, and then there was a gap and I went for it, just like I’d imagined.

And then I was slowing to a halt at about the rate you’d expect given the coefficient of friction between skin and damp tarmac. The bottom hairpin. There’s always one going down there. I tut at those guys as I glide past. And now I’m one of them.

I didn’t ground a pedal, the bike just went from under me. Odd Down is a grippy surface and I’ve never felt like I was exploring the limits of traction there before, so I’m not really sure what went wrong. It was an unfamiliar bike and maybe there was still a bit of mud on the edges of the tyres from riding across the temporary path to the circuit: who knows. Anyway, over I went and I was on my own, so it’s all on me. Probably someone else’s race plan got ruined when mine went awry. Sorry about that.

Astonishingly I managed to put a hole in every single piece of clothing I was wearing. Club jersey, base layer, bib tights, gloves… even my socks didn’t survive. The bike was okay, my leg did most of the interacting with the tarmac. And my arm. And shoulder. And ankle. I’m in decent shape though, considering. And thanks to my recent back problems I have lots of really good painkillers.

There’s plenty of positives to take from the race. My general positioning in the race was pretty good, I chased down a dangerous-looking break of four at the front of the pack without burning myself out. And hey: I was off the front with a bit of a lead with 500m to go. Would I have stayed out? Probably not. But I’d have likely been in the points and that would have been a first for Odd Down. So next time I can at least be confident that I can mix it in the 4s up there. Although next time, I might save it for the sprint.

I spent this evening replacing the ruined sleeve of my club jersey with a most of the back of my ruined base layer whilst watching a crap movie, so at least I don’t have to fork out fifty quid for a new one, yet. And tomorrow I’m going out in the Bath CC points leader’s jersey. While I still have it.