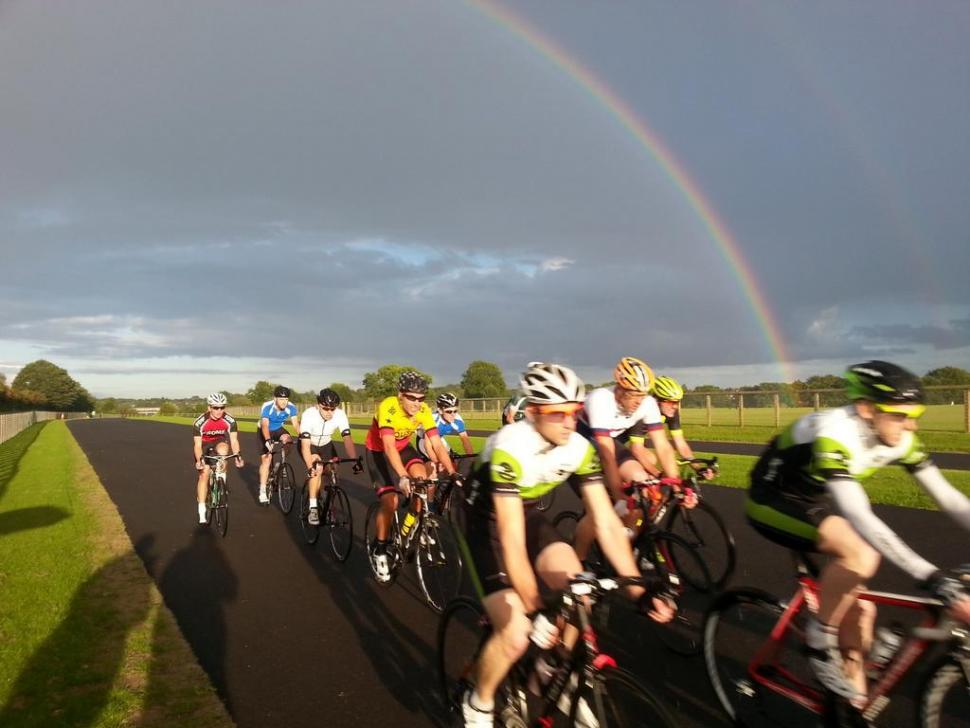 Second Cat 4 race at Odd Down, under rain and beautiful rainbows, not that I was looking up much. I had a new bike to play with too, the Obsydian Invictus, designed specifically for this sort of thing. Did it help me stay in contact until the business end of proceedings? Well, not exactly.

To be honest I probably got spat out at a similar point to last time. The difference was I hadn't gone so far into the red to try and stay in, so when the inevitable happened I was able to hook up with the other rider who got spat out, another Dave, and work to stay somewhere near where the racing was happening, rather than blowing up and missing wheels. And If I say so myself, we did an okay job. We took turns on the front, worked pretty well together, and kept the rest of the race in sight until the very end. We didn't get lapped so I had the full 40 minutes + 3 laps, and we had a comedy sprint for not last which I pipped. Which wasn't particularly fair as other Dave had done the majority of the work over the last five or so laps as I started to tire.

So that's some sort of progress. Low-hanging fruit, I think people call it. I even managed to spend some time near the front for a couple of laps before the constant braking into hairpins and sprinting out of them wore me down. I just don't have the punch to accelerate out of those corners. Partly that's down to me needing to lose weight, and partly it's down to me needing to practice that skill. That means more getting dropped, probably: the best training for racing is racing, after all. There's other races round about – Castle Combe and various airfield circuits – where I'd possibly be able to sit in: the pace isn't really the problem, more the changes of pace. I might give them a go. A winter series has been more or less confirmed for Odd Down so I'll keep coming to the local races too. And the chaingang is beckoning with its grim-reaper-esque bony finger.

The Invictus behaved impeccably once I'd taken a 10mm allen key to the chainset which had loosened off. It certainly doesn't lack for stiffness or directness and it was right at home on the circuit, although I probably need to lower the position a bit. I need to get a lot more miles in on it in a variety of conditions to get a better picture of what its strengths are.

Thanks to Andy Stewart for the pic