Notes on a Strava challenge 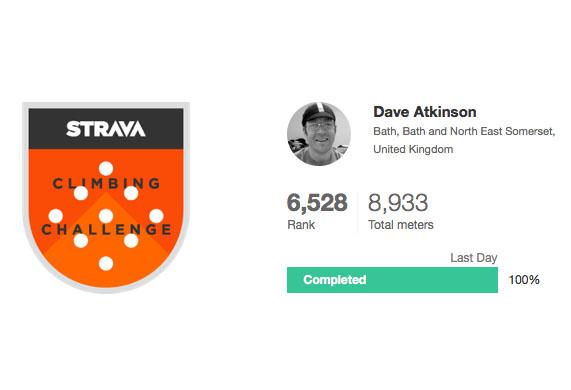 Strava Climbing Challenge Dave
People can do this in a day. I struggled in twenty.

You know what's ridiculous? Strava challenges are, that's what.

Someone in the Bay Area decides it'd be a good idea for you to try and do an Everest's worth of climbing in 20 days, and you hop to it, in the hope of receiving nothing more substantial than a pixellated badge that'll disappear after a bit because you're not premium and you don't have a virtual trophy cabinet. Oh, and the chance to buy some kit you don't want, for more than you'd be willing to pay.

So: ridiculous. And also tempting. You join and get a green progress bar inching its way to your goal. You get a friendly 'keep on going!' kind of half-badge every quarter of the way. Most of all though, you get a reason to go out and ride more hills. I like to think I don't need reasons to ride. But if the experience of getting a proper training plan and having to tick off the sessions has taught me anything, it's that being told what to do is a good catalyst for actually getting something done. For me, anyway. So off I went, and found some hills.

I say 'found'. I know where they are. In Bath, that's basically everywhere. It's possible to do 1,250m of climbing in less than 50km without leaving the city or riding the same bit of road twice, so the topography's not the issue round here. Getting it done in the time would be though. An Everest divided by 20 is about 450m a day to get done, over twice what I'd be totalling in a normal week. More hills then.

In the end I concentrated on a few hills on my side of town – Ralph Allen Drive, Bathwick, North Road, Summer Lane, Shaft Road (yes yes), Brassknocker (okay, stop it), Claverton and my normal weekday slog up Bloomfield Road. I'd try and do a couple on the way in, and maybe sneak an extra one into the commute home if I wasn't running too late, which I normally am. A couple of longer rides and the very able help of Iwein on some lunchtime slogs up as many hills as we could fit into an hour and a half (five the first time, six the second) helped push the bar towards 100%. But by the start of this week, with four days left to run, I wasn't really that close. I'd left myself needing the best part of 600m a day for the last four days to make it. I was behind schedule.

Monday, and three hills in the morning plus the climb home, knocked a chunk off the remainder but not a quarter, still leaving me with over 600m a day to do. Tuesday went better, with a loop out South of Bath followed by the realisation once I'd rolled into town that I'd left something vital at home. Grinding back up to the top of town to get it, then having to do it again come home time, gave me over 700m of ascent for the day.

Three more hill reps on Wednesday put me in reach, and even evening laps at the Odd Down Circuit helped: okay, 22 laps is only 71m of climbing, but it all counts. I left home on Thursday morning knowing three more hills would probably do it, but I struggled up a fourth just to make sure. And in the end I'd reached the target before I had to saddle up again for the slog home. And it really was a slog: I was ruined.

I ended up with 9,087m of climbing and a resounding 6,441st place. And PBs on most of the hills I rode thanks to the fact that I'm a lot lighter than the last time I rode many of them, and the fact that I was trying to keep up with Iwein a lot of the time, and that ain't easy.

The lesson from this? Tools are tools. Use them if you think they'll help. It wasn't one of my specific goals to do 9,000m of climbing in 20 days but in the long run it'll probably help with the goals I do have, and without the green bar on Strava I'd have probably lost interest.