MiniSportiveStart
Need some winter motivation? Then you could enter a winter sportive

Sunday morning dawned grey and overcast and quite chilly, but that didn’t deter over 150 people from turning out for the second Performance Cycles Winter Mini-sportive Series event. Now in its fourth year, the Cotswolds-based sportive series has become a winter staple with many enjoying the monthly rides that run from October to March with a low entry cost, enjoyable routes and plenty of cake, tea and bacon sandwiches awaiting all finishers.

As with most sportives, there were two routes on offer, on this occasion 45 and 65 miles. With both following the same roads for the first 40ish miles, entrants could decide well into the ride which route they wanted to do, depending on how their legs were feeling or whether they had family commitments to get home for. It also provided lots of groups along the route and willing companions to share the workload on the windier stretches.

I opted for the longer route and set off with a handful of Performance Cycles regulars as the ride left the Waterland Outdoor Pursuits facility in the heart of the Cotswold Water Park. Out onto Spine road, and the big groups on the road quickly dissolved into smaller bunches as cyclists settled into their own pace and rhythm, to see them through to the finish.

Easing cold and slightly reluctant muscles up to a working temperature, the route soon started delivering the sort of picture postcard backdrops you’d expect of a sportive run in the heart of the Cotswolds. Rolling through the quaint villages Oaksey and Crudwell within a couple of miles, the route soon delved into the quiet traffic free country lanes that typify the different routes used by the sportive series. The organisers clearly know the lanes well as they picked some really nice roads, skirting along the edges of large fields, over small rises and down steep descents and a nice balance of climbs and flatter roads. 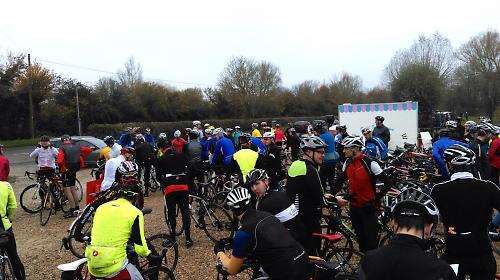 The route also eased you into the climbing, of which there was a reasonable amount but nothing too onerous for a winter ride. Ticking off a series of small hills before the big climb to Bisley and Birdlip later in the day provided opportunity to thoroughly warm the legs and lungs. There were no feed stops - one way in which the organisers keep the costs down so you have to be self-reliant- but the bustling village of Tetbury awash with antiques shops provided an ideal chance to refill bottles. Because once out of Tetbury the route started to get into its stride.

Fortunately local knowledge - for these are my local roads as a resident of the Cotswolds for the past year - meant I knew just what was in store once the long route split from the short route at Rodmarton. A long drag along a typically Cotswolds country lane, the low slung stone wall offering no shelter from the cold hard wind blowing across the fields, led into a tricky descent through Frampton Mansell.

For this descent, which pitches steeply down the side of the valley and passes under a splendid viaduct that carries the railway from Swindon to Cheltenham, I was surely glad to be on the Stoemper Darrell with its Shimano hydraulic disc brakes. Stories of other cyclists pulling desperately at their brake levers to scrub off speed on this descent serve as a nice reminder, as if it was needed, of the huge benefit of riding the new generation of road hydraulic disc brakes at this time of year.

What goes down, as the saying goes, must go back up. And the Cotswolds can really deliver some lung-busting climbs, and the road up through Oakridge Lynch was a case in point. I was in no way relishing the 53/39 chainset but merciful of the 28 tooth sprocket on the cassette, but it was nethertheless a slow grind up the summit. The climb may only be 800m long with an average 12% gradient, but it’s definitely steeper in places, especially the opening few hundred metres where the gradient is punishing.

While the top was indeed the top, it wasn’t the end of the climbing. The main road continues to rise, up through Bisley, and heads all the way to Birdlip, one of the highest points in this area. Not quite reaching Birdlip though, the route took a sharp right hand turn away from the main road onto a quiet back country lane, where a few steep but short rises were awaiting anyone with hopes of the climbing all being completed. The ascent out of Caudle Green is one I won’t forget in a hurry.

By this stage in the sportive I had been riding solo since the route split, my Performance Cycles team mate Tony having long dropped me (evidently still carrying excellent form from his recent hill climb season) so it was with some relief that a group of Wiltshire-based cyclists who had driven up to do this sportive, caught up with me for the remainder of the ride. We chatted, took turns on the front into the wind, and the miles quickly rolled under the tyres.

Past Sapperton, through Coates, into Ewen, Somerford Keynes and then eventually pulling back into the car park, a slightly weary 65 miles later, where the smell of bacon butties was hanging deliciously in the air. Oh a Watt Bike demonstration for anyone with any unspent energy. I happily declined the offer of doing a 6-second effort and concentrated on my coffee.

A small but well run sportive with none of the frills (no electronic timing ot feed stations) but getting the basics right (signposted route or GPX for your Garmin and cake) with a splendid route offering some highlights of this corner of the Cotswolds, and a very intimate and friendly atmosphere. There were more mudguards on bikes than racers on carbon race bikes too, and in that way it felt much more like a reliability trial than a regular sportive. And that's just fine by me.

I don’t need much of an excuse to get out on the bike, but if you need some motivation through the winter I can thoroughly recommend the Performance Cycles Winter Mini-sportive Series, which runs every month through to March. Treat them as mini goals to help you tick away the winter months.

There are four more dates for your diary, 14th December, 11th January, 8th February and 8th March. Get signed up and stick the dates in your calendar, and I’ll see you there.