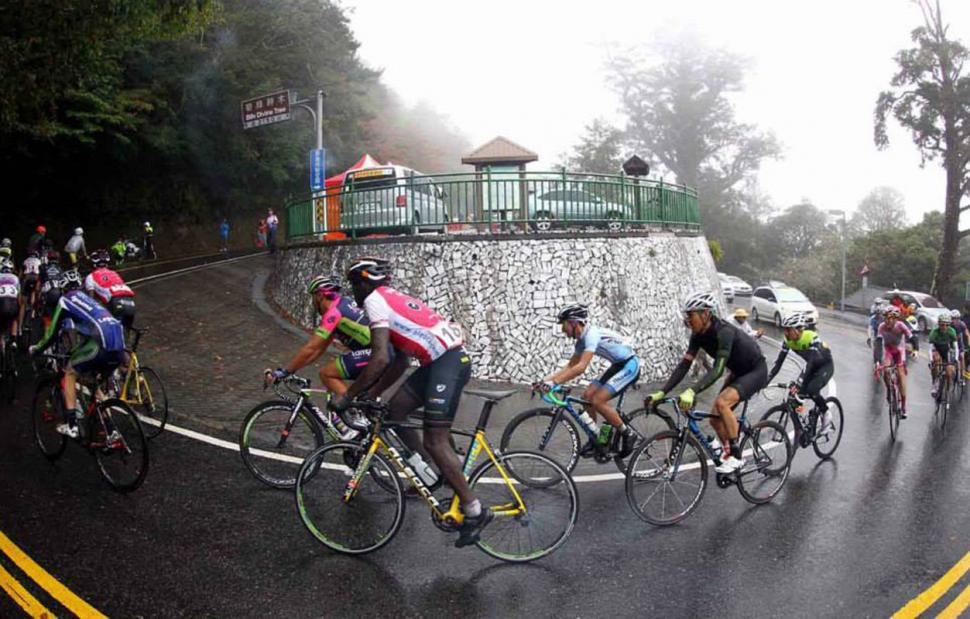 The Taiwan King of the Mountain Challenge is staggering in scale, starting on the eastern coast of Taiwan and leading to the heart of its interior, with mile after mile of lung busting inclines leaving a trail of exhausted bodies in its wake. Riders come from all over the world to test themselves against each other, but the reality is that on these slopes the biggest test is against yourself.

They come with carbon, titanium and steel, aero wheels or lightweight, sporting the freshest threads or their club colours with pride. There are no boundaries here. Just suffering. The mountain doesn't care who you are, it will ask the same questions and demand the correct answers. 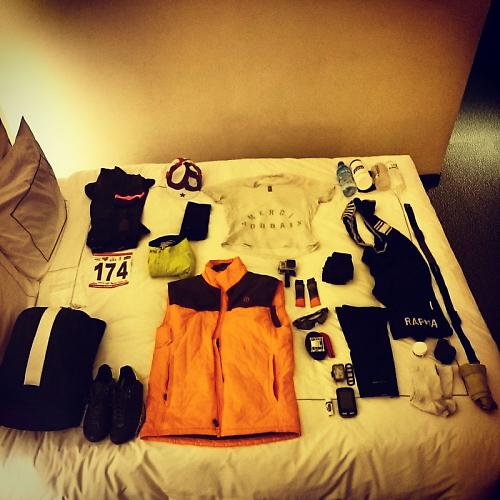 The riders come in droves. This year nearly 450 lined up on the beach of the starting town of Hualien. The organisers have instigated a zero tolerance policy to drugs, so if you've doped before then you won't be welcome, at their discretion is the power to refuse admittance to those even suspected of doping. This is a race that deserves the very best sporting talent and sportsmanship. 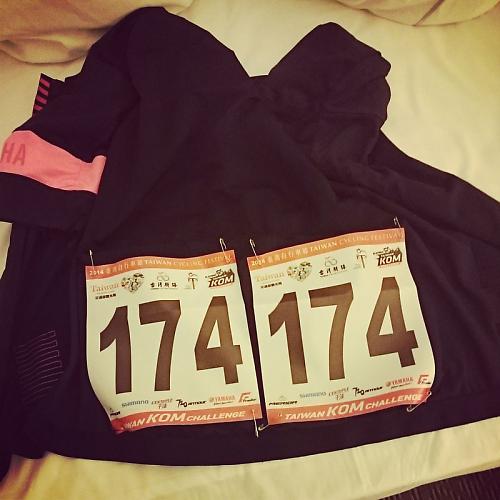 They are out there, doing it. They are not content to sit at home, chilling on the bun run, or talking the big one on the chain gang, these riders are out there, sometimes in skin suits, sometimes in merino smartwool, pushing themselves further than they want to, a special mention to the one guy who was rocking tennis shoes and plastic pedals, climbing a 105km ascent! 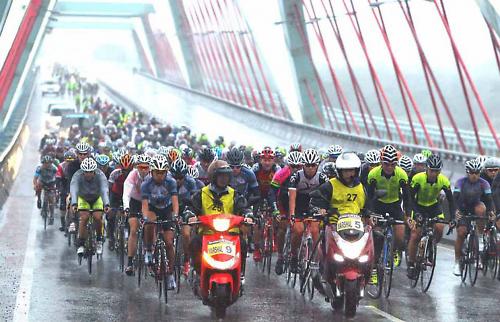 This year's race started with rain, and it didn't let up. Whilst at sea level it was a balmy 18 degrees, by the time riders had climbed for 4 or 5 hours with the rain falling constantly, the broom wagon was filling rapidly as the temperature dropped with the rising altitude.

If you had the opportunity to view the surroundings before the cloud came in and obscured the world you would have looked out on deep valleys below and towering cliffs above, with the waters of the Toroko Gorge winding their way through the centre of the valley. 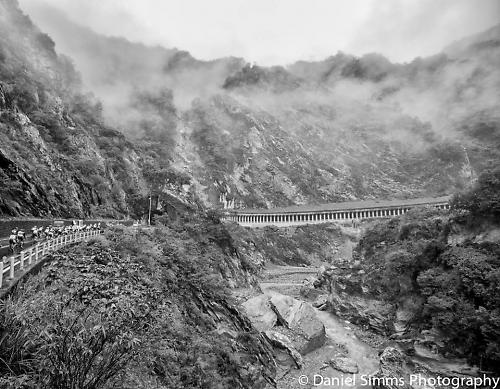 The scenery has a special role to play in the race, acting both as diversion and reminder of what lays ahead.  There is always another bend, another turn, another ramp to bring you back to reality, and that reality is grimly etched on the faces of the riders as you pass them.

I use the word 'pass' deliberately, you see I don't do it to highlight my grimpeur skillset, or my unerring metronomic ascent through the unforgiving inclines, but rather as a smooth segue into how my race went. What is it that they say about things and threes? Third times the charm, or is it that bad things come in threes?

If you've read my previous blogs you will know that this year hasn't been stellar for results, with events ending in inglorious scratches, so this was my opportunity to wipe the slate clean and get me a finish.

Or rather, as it happened in this instance, to carry on with my streak of torrid luck!

Words do not, they cannot, explain the level of despondency I feel as I write this.

3 events, 3 destroyed rear tyres, ridden on 3 different wheels and 3 different bikes totaling up to 3 DNF's. That's enough to rank it as a pretty rubbish year, but it means I don't have to do much next year to surpass it!

At km 5, still well within the neutralized zone and with the swarms of riders around me I got my first flat (after the transcontinental debacle my heart sank).  No matter thought I, I'll fix that and get on my way without losing too much ground, with a 40km stretch before the climbing really started it was well worth rolling back in to the bunch.

3 minutes later and it's all good again, back up to speed and ready to play catch-up like Cav after a Milan San-Remo climb. And then, within minutes, something happened. I didn't see it, but I certainly felt it, within moments I'm rolling on another flat, but this time, to my dismay, with a 4 inch rip to my sidewall! An emergency gel wrapper as a patch didn't suffice, so instead I double-stuffed the tyre with 2 inner-tubes and prepared to roll out.

Hoping to find the Shimano neutral support I kept on going, with the supremely sketchy ride able to (not at all safely) sustain 25kph on the flat. To put it in perspective I had been out riding a few days earlier with female pro Tiffany Cromwell of Specialized-lululemon, and we had been tanking along at 40kph, my ride for this event was a WyndyMilla Massive Attack and it was lightning quick, hopes had been high.

I kept on riding whilst the slopes rapidly robbed me of speed, barely able to keep up the necessary 15kph on the lower 7% inclines. I couldn't lean, I couldn't turn quickly, every line had to be precise and the bike steered like a motorbike and sidecar lest the tyre should fall off.

2 hours later and 40k further I knew the end was fast approaching, it felt like a doomed solo attack in the Tour, destined to fail but committed nonetheless, I had little chance of managing to avoid the time cuts even if the neutral support did arrive, so when a team Van came to take me off the road I put up no fight, acquiescing with a grim nod that this was indeed the only option. There was no way I could have recovered time to make the cut as the road was starting to kick up more frequently, and airless wheels do not make for a fast-rolling combo!

As I drove towards the cloud-covered summit, I was filled with admiration for the guys and girls still out there on the climb in the pouring rain. The conditions were truly torrid, but for the majority, quitting seemed furthest from their minds. My seat-mate in the broom wagon had finished the race last year in 4.5hrs, but this year it was too cold and too wet for him to continue past 70k.

There's no doubt about it, the taiwanese KOM is a very special event, one which may carry UCI approval in the future, it's an opportunity to see some top quality climbing talent up close, test yourself beyond what you believe possible and submerge yourself in Taiwanese culture. Flight are more expensive than Europe, but food and accommodation is much cheaper so it's certainly worth thinking about if you are looking for a climbing camp or a retreat with the family in quiet roads.

Thanks to the Taiwanese Cycling federation for a great event and special thanks to Daniel Simms for the sweet pictures!